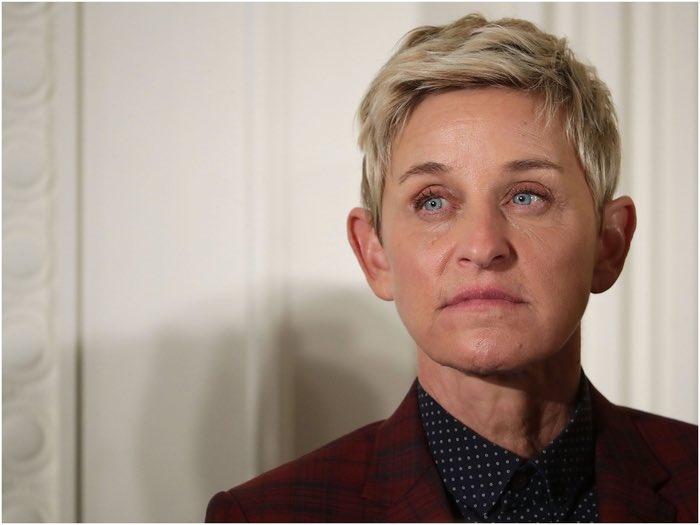 Numerous current and former staffers spilled the tea in a Buzzfeed article about the bullying and workplace toxicity behind-the-scenes. The article prompted an internal investigation by WarnerMedia.Last July, DeGeneres sent a lengthy memo to staff, saying she is “glad the issues at our show were brought to my attention” and that they are “taking steps … to correct” them.The comedian began her message, “Hey everybody – it’s Ellen.

On day one of our show, I told everyone in our first meeting that The Ellen DeGeneres Show would be a place of happiness – no one would ever raise their voice, and everyone would be treated with respect. Obviously, something changed, and I am disappointed to learn that this has not been the case. And for that, I am sorry. Anyone who knows me knows it’s the opposite of what I believe and what I hoped for our show,” Ellen wrote, per PEOPLE.

“I could not have the success I’ve had without all of your contributions. My name is on the show and everything we do and I take responsibility for that. Alongside Warner Bros, we immediately began an internal investigation and we are taking steps, together, to correct the issues. As we’ve grown exponentially, I’ve not been able to stay on top of everything and relied on others to do their jobs as they knew I’d want them done. Clearly some didn’t. That will now change and I’m committed to ensuring this does not happen again,” she continued.

According to the New York Times, “The Ellen DeGeneres Show” has seen a 43% decline over the last six months, pulling in about 1.5 million viewers — which is down from 2.6 million in the same period last year.

“‘The Ellen DeGeneres Show’ remains one of the top three highest-rated syndicated talk shows this season,” David McGuire, an executive vice president of programming at Telepictures, a Warner Bros. subsidiary, said in a statement. He suggested one reason for the decline is a change in viewing habits during the coronavirus pandemic.

“While broadcast is down across the board and Covid has been challenging for production, we are looking forward to bringing back our live audiences and a 19th season filled with all of the hilarious and heartwarming moments that have made ‘Ellen’ one of the longest running and most successful talk shows in history,” he added.

In her statement last year addressing the fallout over her alleged problematic behavior toward staffers, DeGeneres said some of her colleagues have been misrepresenting her to the media.

“I’m also learning that people who work with me and for me are speaking on my behalf and misrepresenting who I am and that has to stop. As someone who was judged and nearly lost everything for just being who I am, I truly understand and have deep compassion for those being looked at differently, or treated unfairly, not equal, or – worse – disregarded. To think that any one of you felt that way is awful to me,” said DeGeneres. “It’s been way too long, but we’re finally having conversations about fairness and justice.”

The talk show host then vowed to do her part “to learn and grow.”

“We all have to be more mindful about the way our words and actions affect others, and I’m glad the issues at our show were brought to my attention. I promise to do my part in continuing to push myself and everyone around me to learn and grow. It’s important to me and to Warner Bros. that everyone who has something to say can speak up and feels safe doing so,” she said.

She concluded: “I am so proud of the work we do and the fun and joy we all help put out in the world. I want everyone at home to love our show and I want everyone who makes it to love working on it. Again, I’m so sorry to anyone who didn’t have that experience. If not for COVID, I’d have done this in person, and I can’t wait to be back on our stage and see you all then. Stay safe and healthy. Love, Ellen.”

Comment by Sheldine Forde on March 30, 2021 at 5:41pm
She will say anything to get her viewers back.