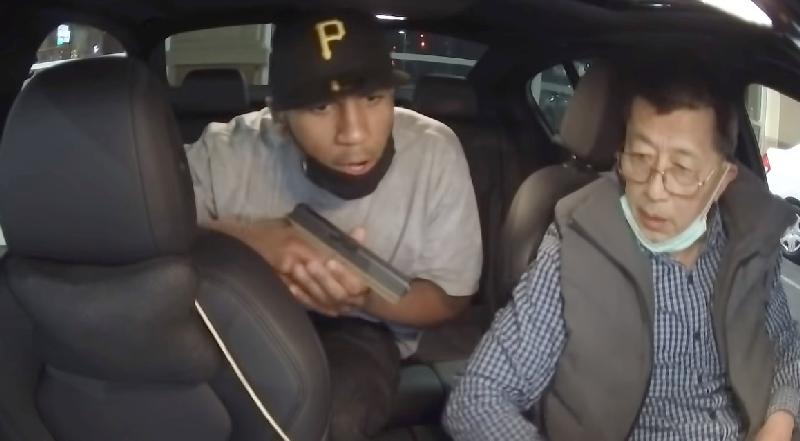 In the Southern California city of South El Monte, a 67-year-old  Lyft driver of Asian descent was pistol-whipped and robbed at gunpoint after refueling at a gas station on Monday, according to reports.

The robbery was recorded on the driver’s dashcam video, which was obtained by FOX 11 in Los Angeles.

“I was very scared,” Paul Liao told KCAL-TV in LA of the alleged robbery. “Very scared.”

The Los Angeles County Sheriff’s Department is investigating whether race factored into the attack on Liao who is Taiwanese. Liao told investigators the suspect asked about his ethnicity

The suspect allegedly jumped into the backseat of Liao’s car while he was at a gas station El Monte, east of downtown LA, waiting for his next fare, his daughter-in-law said, FOX 11 reported.

The suspect allegedly demanded Liao’s wallet and stole his cell phone and around $1,500 in cash, the daughter-in-law said. She said he had just earned the money on another job doing designated driving services, according to KCAL.The video shows the suspect hitting Liao with the gun multiple times, giving him a bloody nose. His daughter-in-law said the suspect got angry after he demanded the keys to the car and was told by Liao it was keyless and only he could drive it. The suspect then fled from the scene.

The driver’s family has established a GoFundMe to help replace the stolen cash and cellphone as well as help with medical expenses.

The suspect remains on the loose.

Authorities are investigating the case as a possible hate crime.

Exactly Jessy who the hell gets in a car to rob somebody looking like they just got off they homebody couch watching Sunday night football and not mention with his mask pulled down in front of a camera.

SHOULDNT BE DRIVING A LYFT AT UR AGE DUDE!  I HOPRE THEY CATCH THAT DUDE THO!, THAT'S NOT RIGHT!

I agree Yasmin, and the robber kept looking at the camera, didn't seem to care that his face was being shown.  Who would do robbing in front of a live camera?

Yo if people actually used the brain they have they would be dangerous all this s*** is staged to fuel this Asian hate bullshit so now all of a sudden black people going around beating up and robbing Asians GTFOH!!!

Comment by Lori Graham on May 15, 2021 at 8:51pm
That's just terrible robbing that poor elderly man I hope the guy is caught