Dwyane Wade’s 13-year-old came out as transgender earlier this year, and the NBA star and his wife Gabrielle Union have since showered Zaya Wade in love and support.

D. Wade paid tribute to his daughter in a message shared with his millions of followers on Instagram.

“Unconditional love, simply put, is love without strings attached. It’s love you offer freely,” Wade captioned a pair of photos featuring his child. “You don’t base it on what someone does for you in return. You simply love them and want nothing more than their happiness. This type of love, sometimes called compassionate or agape love @zayawade.”

Wade shares 2-year-old daughter Kaavia James with Union and is also dad to sons Xavier Zechariah, 7, and Zaire, 18, from his previous marriage.

Dwyane Wade ‘Appreciated’ Mike Tyson for Going At Bossie Over His T...

Twitter Reacts To Boosie Badazz Telling Dwyane Wade Not To 'Cut His...

“As I’m raising [Zaya], as I’m raising my kids, you just try to put them in the best situations to be able to succeed in life,” Wade told PEOPLE in February. “How I do that, and how me and my wife decide to do that, may be different than another family, but we want them to know there’s always unconditional love, that it will always be support.”

“You want your child to feel freedom to be exactly as they are,” said Union, adding that she and Wade are Zaya’s “lifetime lifelines to love, peace, joy, grace, protection and compassion.”

For the couple’s 2020 TIME 100 profile in September, Union said Zaya “has the freedom to be exactly who she is, who she was born to be, to be her most authentic self.” 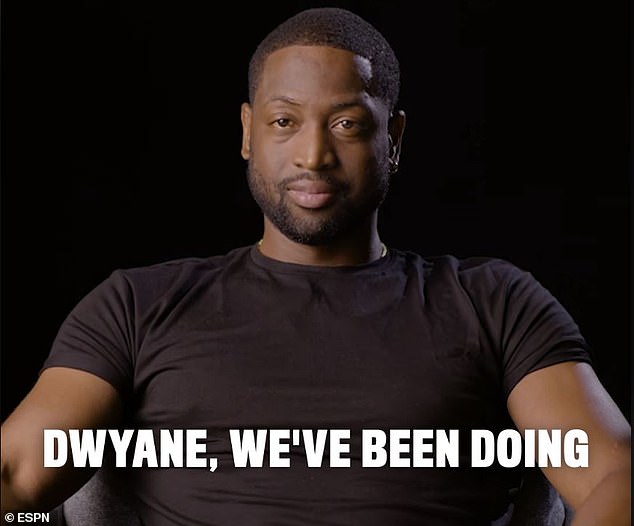 Dwyane Wade revealed the 'hardest thing I've ever had to do' was tell Gabrielle Union that while they were on a break, he got another woman pregnant.

'I couldn't sleep. I wasn't eating' from the stress of having to inform Gabrielle, he said in his upcoming doc D. Wade: Life Unexpected, according to Entertainment Tonight. 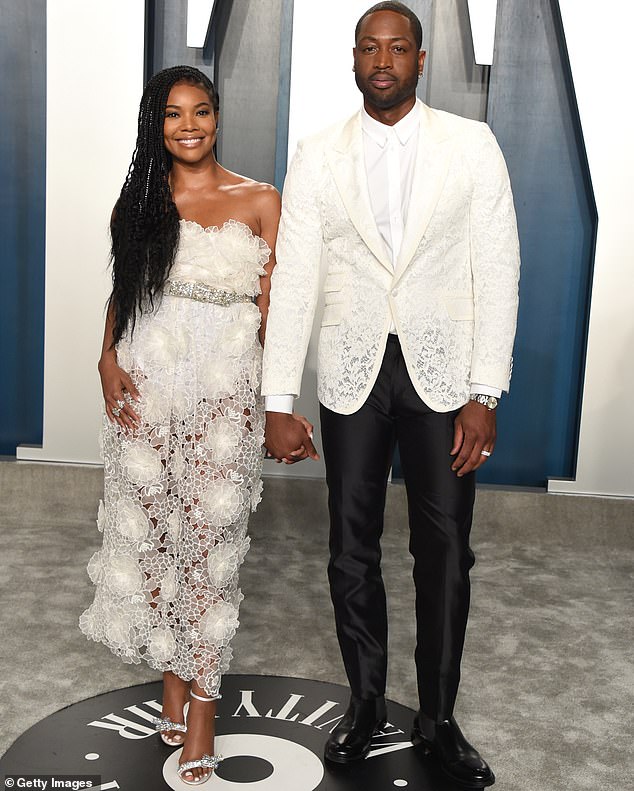 Tough: Dwyane Wade revealed the 'hardest thing I've ever had to do' was tell Gabrielle Union that fathered a child during their break; pictured at the Vanity Fair Oscar party this month

The former NBA star is being profiled in the new documentary, which will air February 23 and pull the curtain back on his personal life.

'I had a child with someone else and I had to tell her,' said Dwyane, who had Xavier with Basketball Wives star Aja Metoyer.

'Hardest thing I've ever had to do is man up and tell Gabrielle Union that I've had a child with somebody else,' he revealed.

'When you hold something in that you know is going to come out and you have this information and you know it's gonna f*** somebody's life up, that you care about, that you love, if it don't hurt you, then you're not human,' he said. 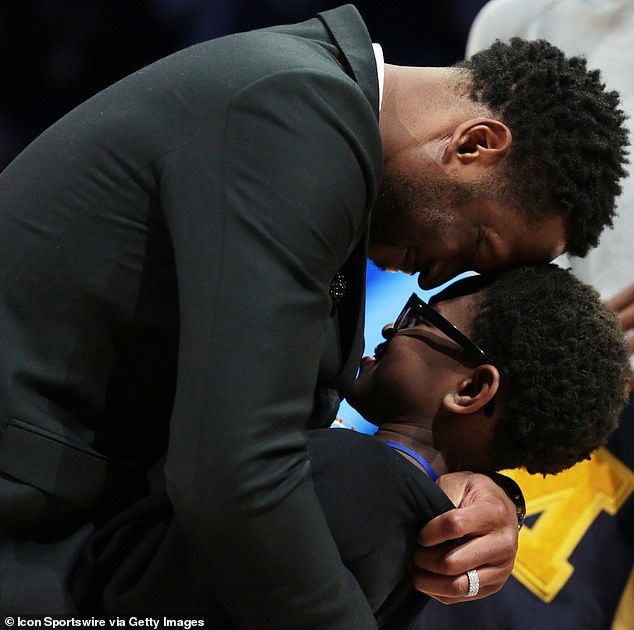 Father and son: The couple began dating in 2008 and married in 2014 - but they were apart in 2013 when he fathered his son Xavier, whom he is pictured with last January in Milwaukee 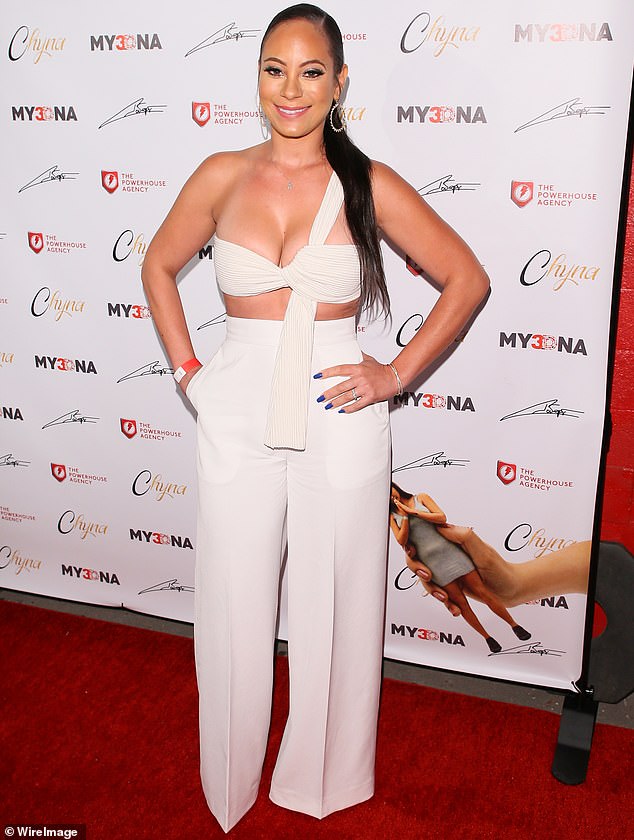 Baby mama: 'I had a child with someone else and I had to tell her,' said Dwyane, who had Xavier with Basketball Wives star Aja Metoyer (pictured in 2017)
Dwyane Wade opens up about daughter Zaya and parenting

'Me and Gab just went through something that you never want to go through and we still came out of it,' said the sports hunk.

Dwyane already had two children - Zaire, 18 and Zaya, 12. He and Gabrielle now have a one-year-old daughter together called Kaavia.

Gabrielle suffered multiple miscarriages before she and Dwyane turned successfully to IVF, resulting in Kaavia's birth, which is featured in the new documentary.

The power couple have also raised Dwyane's 18-year-old nephew Dahveon, whom the basketball player was awarded custody of in 2011.

Dwyane and Gabrielle have recently been hitting the headlines for supporting Zaya - named Zion at birth - in being a transgender girl.

'I couldn't sleep': 'I wasn't eating' from the stress of having to inform Gabrielle, he said in his upcoming doc D. Wade: Life Unexpected, according to Entertainment Tonight 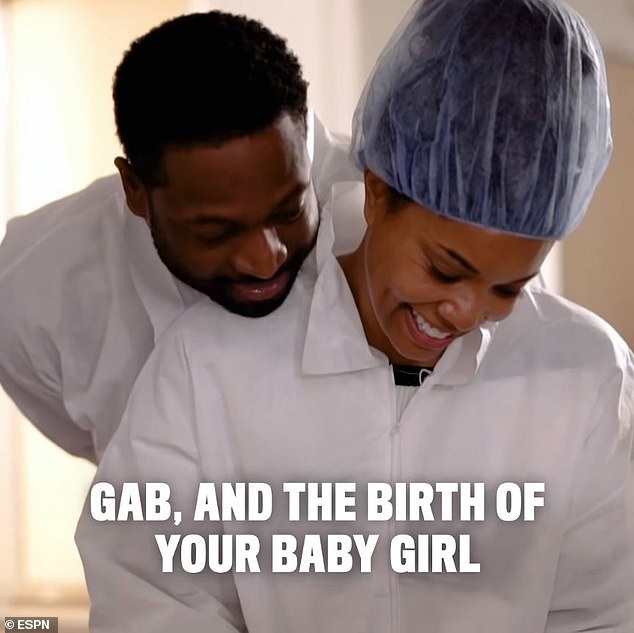 Incoming: The former NBA star is being profiled in the new documentary, which will air February 23 and pull the curtain back on his personal life

*Dwyane Wade chopped it up with Ellen DeGeneres on her talk show on Tuesday, and he recalled the moment his 12-year-old son came out to him and wife Gabrielle Union.

Wade says he hopes to give his gender transitioning child “the best opportunity to be her best self.”

“First of all, I think it’s what every parent should be is what you’re being right now,” DeGeneres told him, per PEOPLE. “Which is unconditionally loving your child and supporting your child in whoever they are.”

Meet Zaya. She's compassionate, loving, whip smart and we are so proud of her. It’s Ok to listen to, love & respect your children exactly as they are. Love and light good people. 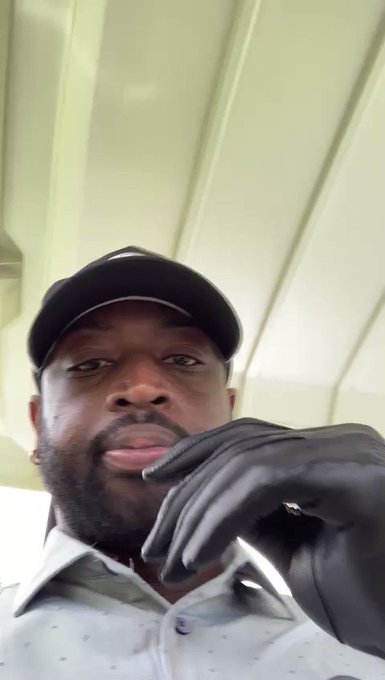 52.9K people are talking about this

Following the retired NBA star’s chat with Ellen, Union posted a clip on her social media of Wade with his son, now named Zaya (formally Zion), cruising around on a golf course while the child drops some wisdom. Check out the clip via the Twitter video embed above.

Union captioned the clip, “Meet Zaya. She’s compassionate, loving, whip smart and we are so proud of her. It’s Ok to listen to, love & respect your children exactly as they are. Love and light good people.”

The video has been met with praise from the LGBTQ community, and anyone who suggests Wade and Union are exploiting/parading this child around like a prop is immediately attacked.

Many believe the celebration of gay/transgender children is pushing society closer to accepting pedophilia.

Meanwhile, during his chat with Ellen, Wade explained why Zion changed his name of Zaya.

“So once Zaya, our 12-year-old, came home — first Zion, I don’t know if everyone knows, originally named Zion, born as a boy — came home and said, ‘Hey, I want to talk to you guys. I think going forward I’m ready to live my truth. I want to be referenced as she and her, I would love for you guys to call me Zaya,’ ” Wade shared.

Wade admits he and Union turned to the cast of “Pose” for help understanding the child’s transition journey.

“So internally, it’s now our job to go out and get information, to reach out to every relationship that we have — my wife reached out to everybody on the cast of Pose — we’re just trying to figure out as much information as we can to make sure that we give our child the best opportunity to be her best self,” he continued.

“Once Zaya came home and said, ‘I want you to call me Zaya and I’m ready to take on this,’ I looked at her and said, ‘You are a leader. And this is our opportunity to allow you to be a voice,’ ” Wade added. “Right now it’s through us, because she’s 12 years old, but eventually it will be through her.”

Hear more from D. Wade on the subject via the YouTube clip above.

Can u imagine before his son was born and eventually "came out", how many times Dwayne Wade called other males "faggotts, h*** or gay mother effa", whether he was joking or arguing? Looks as if the tables are turned. I don't care how many photo shoots or tv show appearances Dwayne  goes on, you know that inside he's hurt, disappointed and embarrassed. However, I commend him for not turning his back on his son. ....Sorry, I can't absorb the thought of my son getting hitted in the s******! 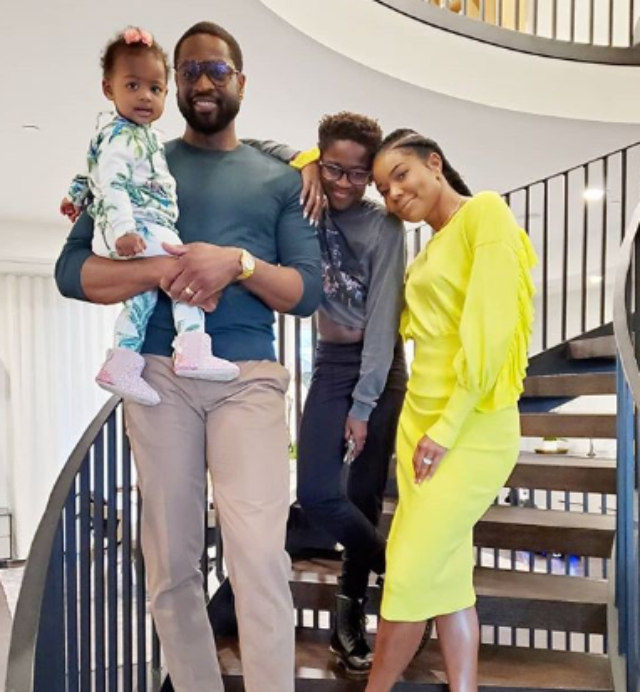 Comment by vaughn mitchell on February 12, 2020 at 11:26am
Just make sure your there for him/ her because the hell he/she will go threw, the taunts, the violence. Born a male should stay a male, born a female should stay a female.

Comment by mr1stroke on February 12, 2020 at 7:31am
I teach my child right and wrong and told how they will push it on her, i gave her most of the signs that exist sho she knows, i also let her know its okay to be different and why so she does not have to be impress or be like every one else and do what they do, i told my child i will always love her but i will never accept that life style, if that would happen i will lose a daughter, either you love human or God, how can we do right and we accept and teach pur kids to do wrong, what is the role of parents, how kids know from right to wrong? Majority of the world or society have no respect for God or his words they glorify men kind, but in the church every Sunday with a bible while they set their own rules? This is nonsense and all 5hose who favors that living a nonsense life trying to force on others as if its the right thing

Comment by Cherry Butter on February 12, 2020 at 6:01am
Hard pill to swallow if it's your own child. Seems like these kids today are full of surprises. Really trying to make this the norm.

Comment by mr1stroke on February 11, 2020 at 10:08pm
They support it otherwise the gay community would come for them. The bible says they will come a time many will have to pick side, pick their group, well its clear how many are making their choices now, some of you make excuses because you either one or some day will be on that side, others choose not to speak or afraid to speak because they are under command of the gay community they have to compromise because thats the only way you can survive