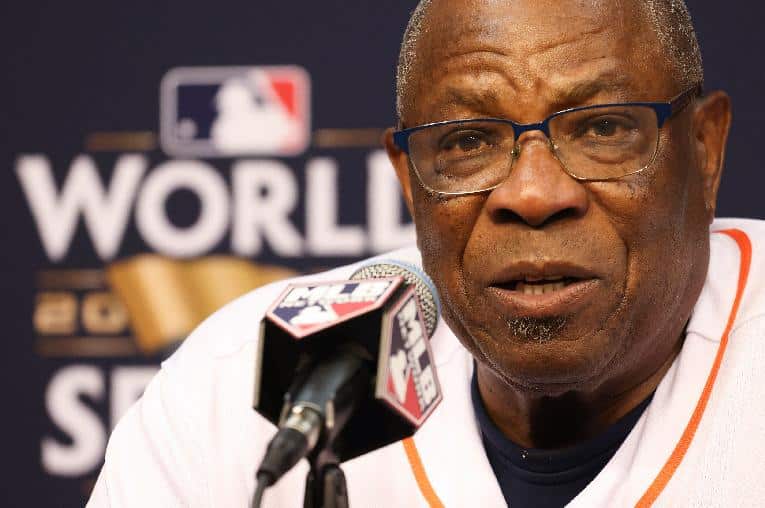 On Wednesday, The Associated Press reported that there would be no US-born Black players in the World Series for the first time since 1950, three years after Jackie Robinson broke the Major League Baseball color barriers.

Baker, who is one of two Black MLB managers, was asked for his thoughts about the AP report at the Astros media day on Thursday. “Well, I don’t think that that’s something that baseball should really be proud of. It looks bad,” Baker said. “It lets people know that it didn’t take a year or even a decade to get to this point.”

Ahead of Game 1 at Minute Maid Park in Houston, the Astros and Philadelphia Phillies announced their 26-man World Series rosters on Friday, and neither team’s rosters include any US-born Black players.

Astros outfielder Michael Brantley, a Black player, likely would’ve been on the roster but suffered a season-ending shoulder injury earlier in the season.

Meanwhile, the Phillies had no Black players on their Opening Day roster this year for the first time since 1959. Roman Quinn, who is Black, was a backup outfielder with the Phillies this season, but was released after playing in 23 games.

Despite the reality, Baker offered an encouraging take highlighting the recent draft numbers and players in the MLB’s academies. “But there is help on the way. You can tell by the number of African American No. 1 draft choices. The academies are producing players. So hopefully in the near future, we won’t have to talk about this anymore or even be in this situation,” the Astros skipper concluded

In the 2022 MLB Draft, for the first time in draft history, four of the top five selections were Black players, according to the MLB. All four of the players are alumni of the DREAM Series, which is a diversity-focused development program, funded in part by MLB & USA Baseball, the national governing body for organized baseball in the US. In total, nine Black players were selected in the draft, the most by total percentage since 1992.

Furthermore, between 2012 and 2021, 56 of the 319 players selected in the first round of the draft were Black or African American, with a large percentage coming from MLB-led youth and amateur baseball development programs, according to Major League Baseball.

MLB reported that 38% of players on Opening Day rosters this season were players of color, with 7.2% of those being Black or African American.

While no players will be US-born African Americans, there will be Black players in the Fall Classic, including Afro-Cuban slugger Yordan Alvarez of the Astros. Players from eight different countries will be represented in the World Series this year.

Get use to it Latinos are taking over for the black population in everything. We are 3 rd class negroes now. Our only hope is the put some more melanin in these latin females or find another country to live in

Look at what is making headlines!!!!!  Is this all blacks are worth?  Playing fuc$ing games.  Man it's high time we put away the balls, grow the freak up and see the world is serious and it ain't about games all the time.  We as blacks have an illicit relationship with balls....footballs, baseballs and all other balls.  Games are for children.  There are more serious issues than blacks being in a world series.

Get some secret free psn codes and shut up already geez