BANGKOK — Dunkin’ Donuts has apologized for the “insensitivity” of an advertising campaign in Thailand featuring a woman in blackface makeup to promote a new chocolate flavored doughnut.

The Dunkin’ Donuts franchise in Thailand came under criticism Friday after Human Rights Watch called the advertisements “bizarre and racist.”

The company’s chief executive in Thailand initially defended the campaign, but the U.S. headquarters quickly followed up with an apology. 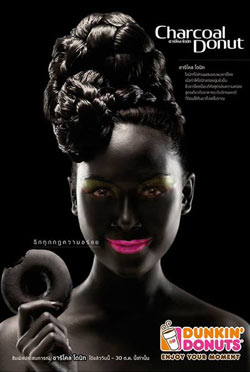 “We are working with our Thailand franchisee to immediately pull the ad. DD recognizes the insensitivity of this spot,” Dunkin’ Donuts said in a tweet posted on its official U.S. website after complaints erupted on Twitter, in a variety of blogs and in mainstream American media.

The local franchise launched the advertisement earlier this month to promote its new “Charcoal Donut.” In posters, TV commercials and on Facebook, the campaign shows a smiling woman with blackface makeup, bright pink lipstick and a jet black 1950s-style beehive hairdo holding up a bitten black doughnut. The slogan in Thai reads: “Break every rule of deliciousness.”

Critics say the image is reminiscent of 19th and early 20th century American stereotypes for black people that are now considered offensive symbols of a racist era. The New York-based Human Rights Watch said it was shocked to see an American brand name running an advertising campaign that would draw “howls of outrage” if released in the United States.

“It’s both bizarre and racist that Dunkin’ Donuts thinks that it must color a woman’s skin black and accentuate her lips with bright pink lipstick to sell a chocolate doughnut,” said Phil Robertson, the deputy Asia director for Human Rights Watch. “Dunkin’ Donuts should immediately withdraw this ad, publicly apologize to those it’s offended and ensure this never happens again.”

The campaign hasn’t ruffled many in Thailand, where it’s common for advertisements to inexplicably use racial stereotypes. A Thai brand of household mops and dustpans called “Black Man” uses a logo with a smiling black man in a tuxedo and bow tie. One Thai skin whitening cream runs TV commercials that say white-skinned people have better job prospects than those with dark skin. An herbal Thai toothpaste says its dark-colored product “is black, but it’s good.”

Hours before the apology was issued by Dunkin’ Donuts headquarters, the company’s chief executive in Thailand dismissed the criticism as “paranoid American thinking.”

“It’s absolutely ridiculous,” the CEO Nadim Salhani said in a telephone interview. “We’re not allowed to use black to promote our doughnuts? I don’t get it. What’s the big fuss? What if the product was white and I painted someone white, would that be racist?”

Salhani said that the Thai franchise of Dunkin’ Donuts operates independently of the American operation and that doughnut sales have increased about 50 percent since the campaign was launched around two weeks ago, which he attributed to curiosity about the new advertisements.

“Not everybody in the world is paranoid about racism,” said Salhani, a Lebanese expatriate in Thailand who said his teenage daughter was the model featured in the campaign. “I’m sorry, but this is a marketing campaign, and it’s working very well for us.”

we have bigger fish to fry.

Comment by Sonya on September 3, 2013 at 8:29pm
Yes Ms. V. Dixon....I AGREE!!! Trayvon's case still has me feeling depressed about the justice system in America. Florida is known for racism & yet we still live or move there. Why? We should and could do more 2 protect our children. However, unless we are less judgmental racism will continue to spread in our society. So sad.....

Comment by Sufferahsmusic Media Prod on September 3, 2013 at 8:03pm

I don't see racism in this ad.

IT DID NOT LOOK THAT BAD BUT WHAT WE NEED TO DO IS STAY ON TRYVON CASE TO MAKE THEM DO THE RIGHT THING..

I don't why we making a big deal about this, since we have our own people out there bleaching they skin. As for buying Dunkin Donuts its not healthy for us any way. In stead of complaining why don't some one open up a black owned donut store and sell at a reasonable price that the average family can afford. What ever happened to black owned pride and helping the black communities? Hmmmm....