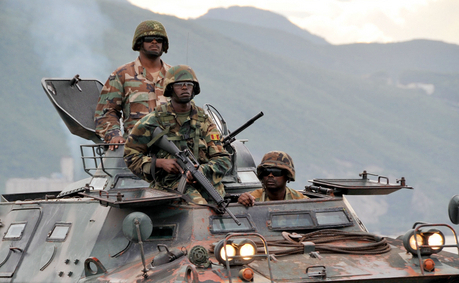 Christopher 'Dudus' Coke, the No. 1 target which sparked an unprecedented assault by the Jamaican army on Tivoli Gardens and other crime havens, is still missing, even as dozens of fatalities were reported from gunfights across Kingston in three days of intense urban warfare.

The operation, which was bolstered by police firepower, started at 10 o'clock Monday morning and splintered into major battles being waged in Woodford Park and Fletcher's Land as the Jamaican capital remained under siege.

Hinds did not say if the police knew the whereabouts of Coke, who is wanted in the United States to answer gun and drugs charges.

"The security forces had previously encouraged the individual (Coke) to surrender himself and, in fact, made known the opportunity to surrender," National Security Minister Dwight Nelson told the media briefing.

He said the security forces were still determined to execute the arrest warrant on Coke who is facing possible extradition.

with thugs manning barricades at entrances to the community.

Nelson said the JDF was greeted with gunfire when soldiers attempting to enter Tivoli were forced to defend themselves on a scale and magnitude which included heavy artillery.

Soldiers later told The Gleaner that they were engaged in a more than five-hour gun battle with the criminals.

One soldier was fatally shot during that battle while five others suffered gunshot wounds. Another soldier was injured in an undisclosed accident.

Several civilians were shot in that battle, with the official numbers being 26 killed and 25 injured. However, late yesterday, medical sources told The Gleaner that the civilian death toll had climbed to 44, with the number of injured moving to 37.

The deaths included two men reportedly found in a neighbouring community with tags on their bodies, indicating they had been shot for refusing to participate in the fight to defend Coke.

The police also reported that 211 civilians - including six women - had been detained, and a large number of firearms, ammunition, binoculars, army fatigues and ballistic vests seized.

However, the cops were unable to provide specific data on those seizures up to press time. They were also unable to say if the powerful Grizzly Big Boar rifle, which was reportedly in the hands of criminals in Tivoli, was among the weapons seized.

"We are still doing some searches and I do not want to go into the numbers," Hinds told journalists.

"There is a rifle that was seized and the persons on the ground said they could not describe it, but I would not want to say if this was the one," Hinds said.

Comment by LuvBug Movement on May 27, 2010 at 12:02am
for real sufferah... give it a rest on the tunes man... at least dont have it on auto play so if someone wants to hear it they can instead of being forced to.

Comment by Dr. Ray Blanchette on May 26, 2010 at 7:45pm
@Sufferahsmusic I find your music promotion offensive and insulting to myself and the serious people who choose to read these post on Caribbean Fever. You pretend to have interest in the blog post discussion, but you're not concerned or interested at all. All your doing is promoting your crap music on EVERY SINGLE DAMN POST. STOP IT. I don't want to have to turn your S*** OFF every time I read a post. People are reading about and addressing very serious issues and are expressing heart felt opinions THAT AFFECT A GOOD MANY OF THE READERS HERE and there we have you promoting your GARBAGE. Get your own network, or website, or WHATEVER and promote your s*** there. Your're like a damn phone call that nobody wants to answer. Can't you take A HINT!