Drake Denies Getting Planked By Chris Brown Over Rihanna "I Definitely Didn’t Get Elbowed In My Face By Chris Brown. Somebody Would’ve Got Knocked The F*c* Out" [VIDEO] 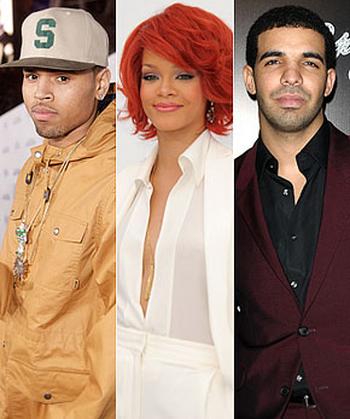 Two weeks ago the internet was buzzing with rumors that Chris Brown had knocked Drake out with an elbow during a dispute over Rihanna at some point in the past.

The rumor got started by DJ Whoo Kid, who told Radio 1Xtra's Tim Westwood that the incident happened, but was swept under the rug by the parties involved.

"I think [Drake] got elbowed too by Chris Brown, but that never came out," Whoo Kid said at the time. "In the chin, like the corner left part. Man down, simple as that."

Drake is disputing Whoo Kid's claims. In a new interview with The Daily Beast, Drizzy tries to set the record straight.

“I respect Chris Brown. I’d like to call myself a friend. I don’t know if I’m allowed to do that,” said Drake. “But I definitely didn’t get elbowed in my face. Somebody would’ve got knocked the f*c* out.”

Personally, I am not a fan of Chris Brown, Drake nor Rihanna!  I don't listen to any of their music because it is kiddie music!  Secondly, why would I care who elbowed who?  Fights go on everyday across the world!

SOMEBODY ALWAYS TRYING TO START SOME BULLSHIT, WHY WASN'T THIS TALKED ABOUT WHEN IT HAPPENED???