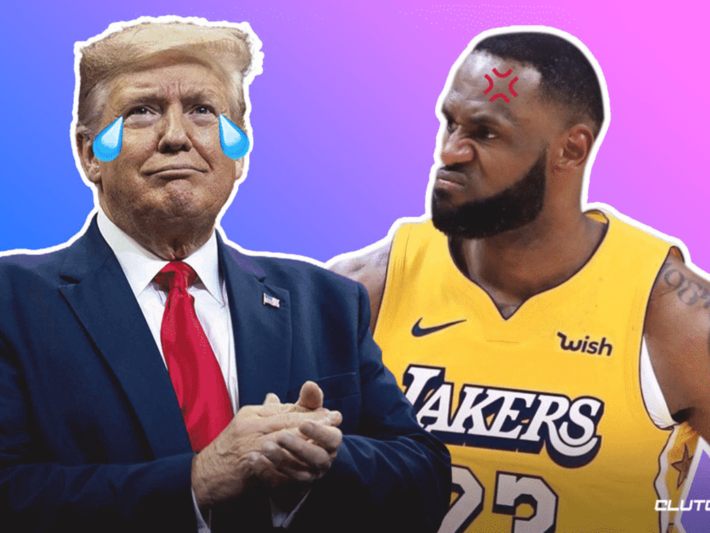 Former President Donald Trump faced backlash after he made a joke about basketball player LeBron James -- saying he could get sex reassignment surgery.

Trump made the comments at a "Rally to Protect Our Elections," in Arizona.

"If I were a coach, I wouldn't be talking to too many women as we know women," he said. "I'd be getting some of these people that ... they're 'women.'"

Trump then said: "Somebody said that if LeBron James ever decided to get the operation, how would he be on the court? How would he be?"

"LeBron James, you can have him," Trump continued. "Did you see the basketball ratings that were terrible? They went up after his team was defeated."

Trump did not appreciate LeBron speaking out against social justice and clowned him even when he was president.

"How about basketball? How about LeBron?" Trump said last year.

And by the way n***** learn how to speak, Lebron has done for his community not black people you damn monkey

Lol what have biden done for you lately, just like slave you have no idea about biden years in politics and if you did you dont care but trump is the worse president, white boys were just killing innocent black men under obama and niggers like you just sit there like a useless dog, niggers lile you dont have a voice vaughn Monkey mitchell

vaughn mitchell you are porch monkey if you are so black tell us what have you done for the community during your 60 years, we can google lebron, what have you done you dumb n***** sit your monkey ass down so i can throw you a dry banana damn slave n*****

It’s Official if i had a white friend than i wont worry, but dont you have to go punch the clock for a white person, niggers like you can talk all that white talk but you cannot fo without white people, the project you live in is own by white people, s*** if you own a home its by white people, look at your bills and see who you are paying, now sit your n***** ass down lol, you dont matter

Comment by vaughn mitchell on July 28, 2021 at 10:45pm
Definition of true black man. LeBron James, sell made Billionaire, build a school in his hometown of Akron Ohio, where kids pay no fee, and get free breakfast and lunch. A brand new school. Kept it real with his childhood friends, brought them in the game, they became agents, now millionaires. You don't hear nothing negative about him in the media, no drugs, not doing anything illegal . But this one racist ass white politician who can't stand LeBron, have to come out with some I am trying to be a comedian with some transgender joke, when his wife is butt naked on the front cover on a magazine. The worst president in history, the one man who if he become president again will take this country back to the days of civil war. But folks all you people that like to agree with Mr1dick, just read how he try to bring down LeBron James, have done more for black people that this racist uncle with a black fist, acting like he is black when we know he is a under cover racist white troll.

you mufuckers are mad because its trump, these days those negros always end up a white boy's b**** for either the love of money, power, or popularity to be around white people, its hard to find a true black man these days, you have to know who you are around, they are sold out, no future because of no past