RIGHT NOW The Electoral College has affirmed Donald J. Trump as the nation’s 45th president, pushing him past the 270-vote threshold for election, with scant evidence of the anti-Trump revolt among electors that some of his critics had hoped would occur.

Normally a political footnote, the electoral vote took on unexpected import this winter after Mr. Trump’s upset of Hillary Clinton, who won the popular vote, spawned a determined effort to block his path to the presidency by grass-roots advocates who saw him as unfit for the White House and, to some, a threat to the political system.

Presidential electors — and particularly Republican electors, who are bound by tradition and often state law to support Mr. Trump — were inundated with phone calls, emails and even threats demanding that they vote for someone else. Leaders of groups that were lobbying the electors had privately believed they had a chance to persuade enough Republican electors to defect, denying him an Electoral College majority and throwing the election to the House of Representatives. But by late Monday, only a handful of electors had broken ranks. A full vote tracker is here. 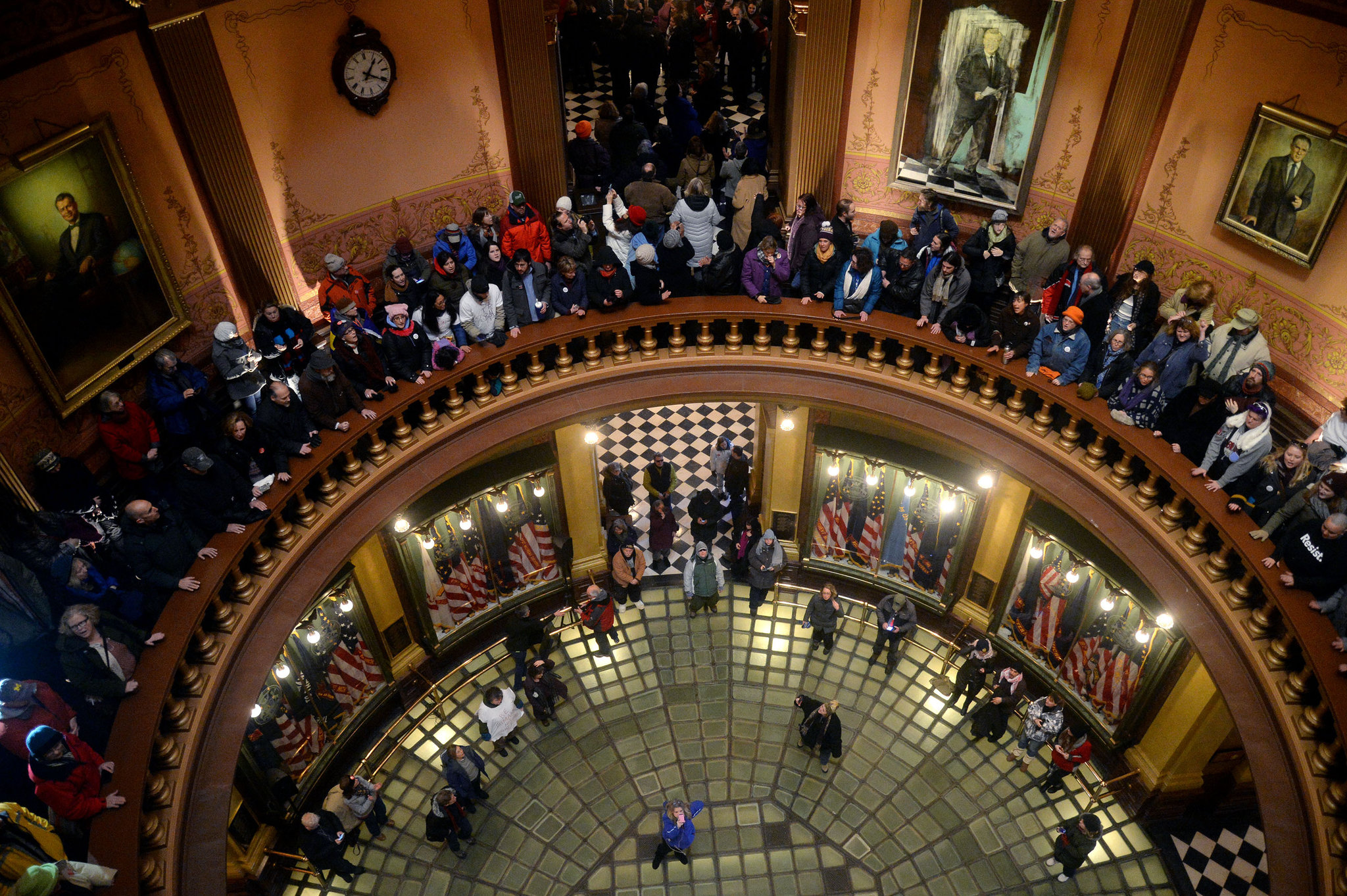 Protesters gathered at the Capitol in Lansing, Mich., before the state’s 16 electors cast their votes.

The chants of protest inside the Michigan capitol building never stopped. Not when the state’s 16 electors headed up the stairs to the state Senate chamber to start their meeting. Not when the doors to the chamber were closed. Not even as the proceedings went forward — all 16 votes going, as expected, to Mr. Trump.

State law requires Michigan electors to vote for the candidate who won the state, which Mr. Trump did by only about 11,000 votes. Still, a group of protesters that gathered here on Monday for several hours said they had hoped there might be one elector, maybe even two, who might vote a different way. “Vote Your Conscience!” they chanted, gathering on different floors of the building.

Many here said they had never before attended a meeting of the electors. They had never thought to before, they said. And there were signs in the capitol that this meeting is not usually a focal point for demonstrators: Security officials outside the state Senate chamber looked vaguely uncomfortable as the protesters chanted right outside the room, and, through an open door, Republican officials could be seen settling in for their vote. — MONICA DAVEY 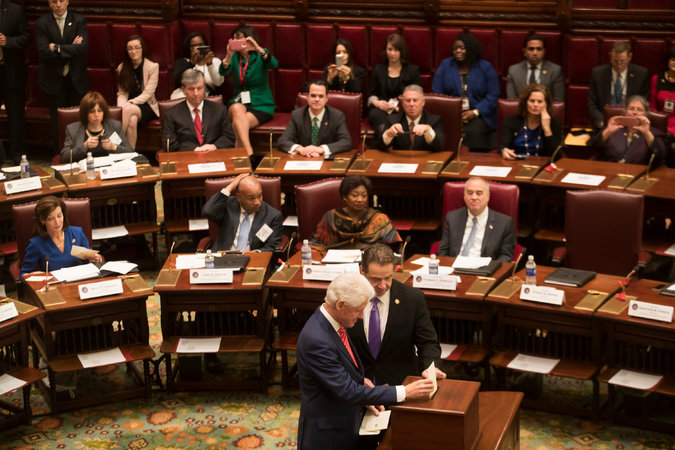 Former President Bill Clinton and Gov. Andrew M. Cuomo cast their votes as electors at the New York State Senate in Albany. Mr. Clinton said he had “never cast a vote I was prouder of” than the one for his wife, Hillary Clinton.

Former President Bill Clinton cast the state’s first electoral vote for his wife, Hillary Clinton, in a bittersweet scene played out in the state Senate chamber in Albany. Mr. Clinton, smiling, sealed the envelope with Mrs. Clinton’s vote — one of 29 she won in her home state – just before Gov. Andrew M. Cuomo, also an elector, praised him as “always kind, always generous” in front of a partisan Democratic crowd in a solidly blue state.

“The president taught an entire generation of elected officials what it means to be to a professional and effective elected official,” said Mr. Cuomo, who was the Secretary of Housing and Urban Development for the Clinton administration in the 1990s. “He showed that government mattered.” Mr. Cuomo also praised Mrs. Clinton – a Senator from New York from 2001 to 2009 — as a role model and “a great friend to this state,” citing her work after 9/11.

In brief remarks to reporters after the event, Mr. Clinton said he had “never cast a vote I was prouder of” than the one for his wife.

In the end, however, Mr. Clinton suggested that his wife’s candidacy was undone by Russian hacking as well as an announcement just before the election by the F.B.I. director, James B. Comey, that his agency would review new emails related to a closed investigation of her use of a private server. (Two days before the election, Mr. Comey reiterated an earlier finding that Mrs. Clinton’s activities had warranted no legal action.)

“At the end, we had the Russians, and the F.B.I. deal, she couldn’t prevail against that,” said Mr. Clinton, heading toward the elevators in the State Capitol. “But she did everything else. And still won by 2.8 million votes.” 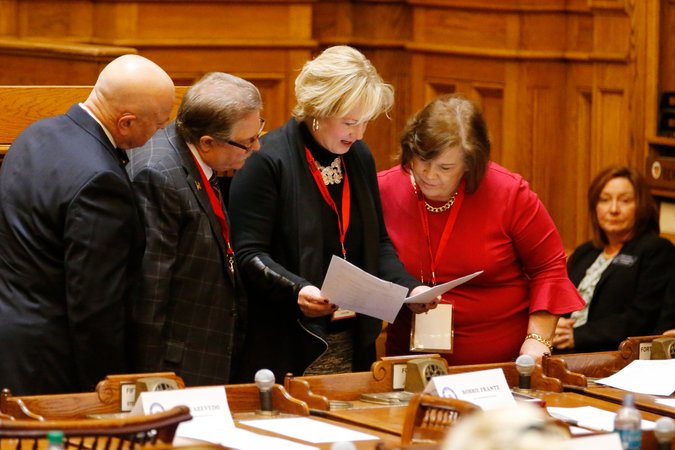 All 16 electors cast their vote for Donald J. Trump in Atlanta.


Georgia and Tennessee: A Trump sweep.

Mr. Trump won the unanimous votes of 16 electors in Georgia and 11 in Tennessee, states he handily won in the November election.

Protesters gathered outside the state capitol buildings in Atlanta and Nashville before the ballots were cast, and in the House chamber in Nashville, “there were a few protesters in the gallery, and a couple of times they would try to say something or shout — but nothing outrageous,” said Adam Ghassemi, the spokesman for the secretary of state.

Tennessee’s electors were bound by state law to vote for the winning presidential candidate. Georgia’s were not, but before voting, electors there had to select a replacement for an elector who earlier has resigned, saying he could not vote for Mr. Trump. — MICHAEL WINES

Unlike most states, Maine does not award all four of its electoral votes to the popular vote winner. It gives two votes to the winner of the state’s popular vote, and one each to the winner of the state’s two congressional districts. The elector from the state’s Second Congressional District is expected to support Mr. Trump, who won the most votes in that district. Another elector, David Bright, wrote on Facebook on Monday that he would vote for Mr. Sanders. 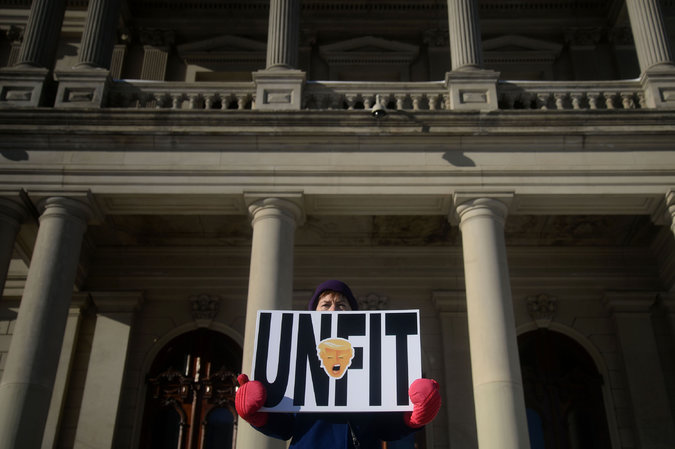 
Mr. Sanders was defeated by Mrs. Clinton in the Democratic primary, but handily won the caucuses in Maine, and the elector, David Bright, wrote that he wanted to send a message to people who cast their first votes for the Democratic Party to support Mr. Sanders.

“I cast my Electoral College vote for Bernie Sanders today to let those new voters who were inspired by him know that some of us did hear them, did listen to them, do respect them and understand their disappointment,” wrote Mr. Bright, whose comments were reported by The Portland Press Herald and the The Bangor Daily News. The state’s other two Democratic electors were expected to support Mrs. Clinton. — JESS BIDGOOD 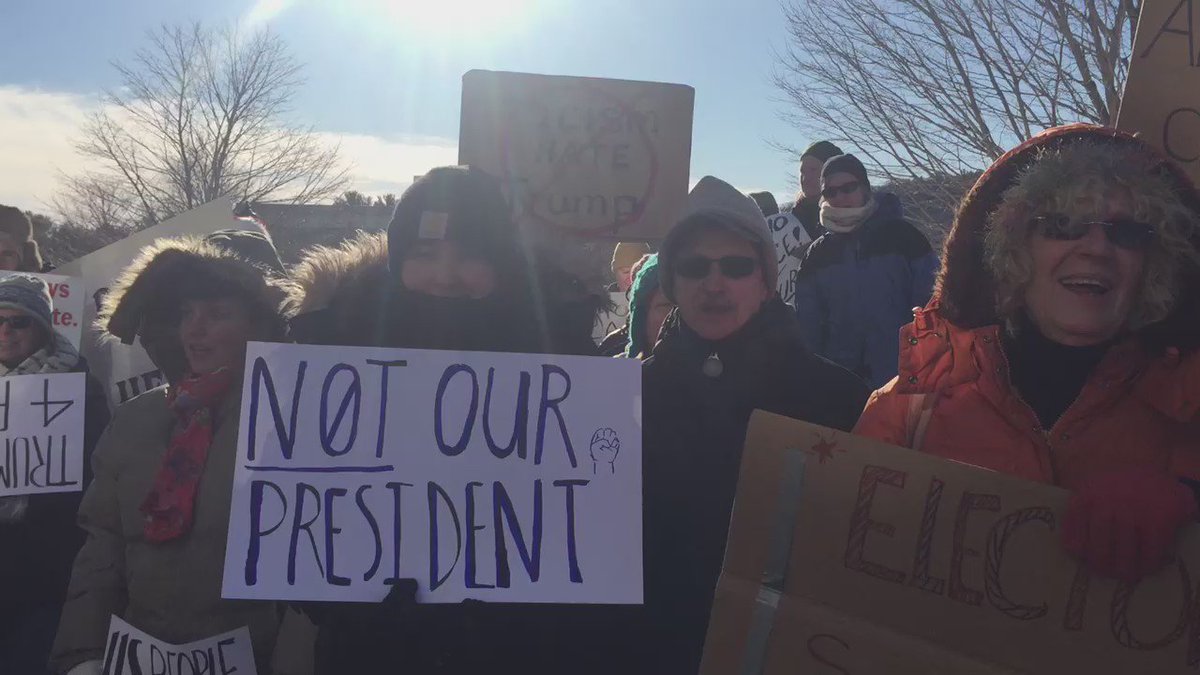 In Harrisburg, hundreds of protesters chanted and waved signs on the steps of the State Capitol and in the lobby, but they were fairly subdued, acknowledging that they did not expect to affect the outcome.

Pennsylvania played a crucial role in the election, one of three states — with Wisconsin and Michigan — that Mrs. Clinton was expected to carry, but that Mr. Trump won by less than 1 percent.

When the electors cast Pennsylvania’s 20 votes for Mr. Trump, the legislative chamber echoed with a long round of applause, followed by shouts of “shame on you” from the visitors’ gallery. 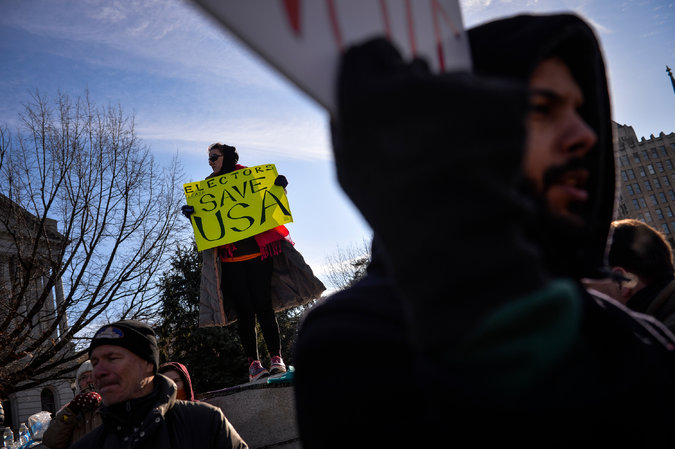 A protester outside the State Capitol in Harrisburg, Pa.

Electors in Madison cast all 10 of the state’s electoral votes for Mr. Trump and Mr. Pence, as was widely expected.

The meeting drew a crowd of several dozen to the Capitol, and a few in the audience booed and chanted “Shame!” after the results were announced. A handful of protesters were escorted out of the room by the authorities, but most stayed seated and the meeting continued with only a few slight pauses. The meeting adjourned after 19 minutes. — 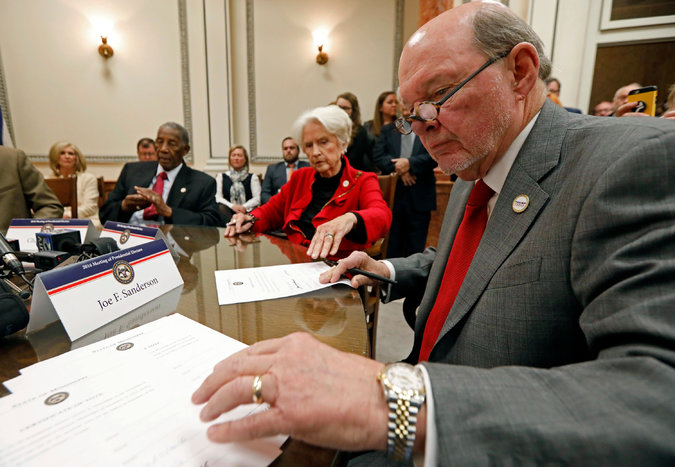 Mississippi’s six electors unanimously and uneventfully cast their ballots for Mr. Trump, who carried the state in November, according to the spokeswoman for the secretary of state, Leah Smith.

A handful of protesters were outside the state capitol in Jackson, and four quietly witnessed the vote in a meeting room inside.

Among the electors, The Associated Press reported, was Charles Evers, the former Republican mayor of Fayette, a talk-radio host and the brother of Medgar Evers, the anti-segregation activist whose murder in 1963 was a landmark in the civil-rights movement. — MICHAEL WINES

Most meetings of electors are being held in state capitals, usually in legislative chambers where public seating is limited. A number of states are live-streaming voting, including (but not limited to) California, Florida, Louisiana, Illinois, Washington, Virginia, Maryland, Indiana and Tennessee. The offices and websites of individual secretaries of state can offer more information on whether and where meetings will be broadcast.


Electoral College members in Arizona cast their ballots for Mr. Trump in Phoenix.

Arizona’s 11 electors were not obligated to vote for the winning candidate, which explains why so many protesters gathered on both sides of the State Capitol for a last-ditch — and long-shot — push to get them to change their minds.

They carried signs that read, “Country before party” and “Electors: Save us, dump Trump.” They brought their children, their dogs and what was left of their hopes.

Karen O’Brien, 54, who voted for Mrs. Clinton, said, “I’m praying that we can get the electors to flip their votes.”

It did not work.

Inside, Secretary of State Michele Reagan, a Republican, asked the electors, “Are you ready to tie up this election with a big red bow?”