Maybe money can’t buy love, but allies of President Donald Trump may think it can buy votes from Black Americans.

Allies of the president are organizing events in Black communities, using their time there to praise Trump and hand out tens of thousands of dollars to those who show up, Politico is reporting.

The first such event took place last month in Cleveland, where raffle winners were bestowed cash gifts of several hundred dollars each. More such events are in the pipeline and one that was scheduled for Virginia this month has been postponed, according to the news organization.

Political experts have predicted that this year’s White House race will draw a record turnout and that Black voters — Black women in particular — will be key. Experts have said that smart candidates will wisely court Black voters along the road to Election Day in November. The Trump campaign has been placing time and money into influencing Black voters. Late last year, Trump spoke at an HBCU to tout his record with exonerating Black inmates.

The events featuring the cash giveaways are organized by a charity known as the Urban Revitalization Coalition, Politico reports. This set-up allows donors to remain anonymous and make contributions that are tax-deductible, according to the news organization.

The arrangement, however, raises questions about the coalition and its tax-exempt status because it does not appear as if the group is measuring charitable need of the cash recipients.

“Charities are required to spend their money on charitable and educational activities,” Marcus Owens, former director of the Exempt Organizations Division at the internal Revenue Service, told Politico. “It’s not immediately clear to me how simply giving money away to people at an event is a charitable act,” Owens said.

For its part, the coalition says it requires anyone who receives a gift from the group of over $600 to fill out a W-9 IRS form. 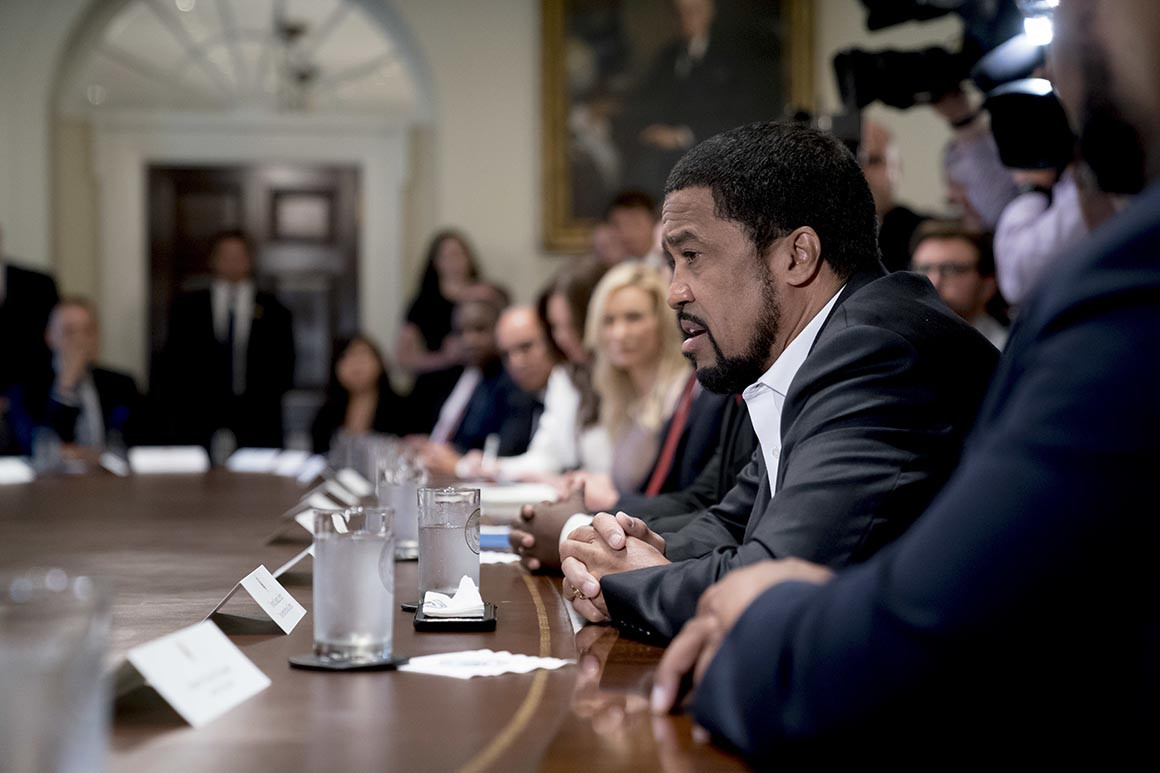 Darrell Scott, CEO of the Urban Revitalization Coalition and a pastor in Cleveland, would not, however, respond to questions by Politico about whether the giveaways met the legal standard for a charitable act. Scott also declined to name the organization’s donors.

“I’d rather not,” he told Politico by telephone. “They prefer to remain anonymous.”

Scott has been one of President Trump’s key Black supporters, having aligned with him before his campaign for the White House. The Urban Revitalization Coalition was registered in Delaware in 2017 and promoted the administration’s Opportunity Zone tax break program, Politico reports.

I choose to think that the world is not divided by colors, race or any other elements of pseudo mightiness. So I don't support these discussions. The only reason I decided to stop by here, is that because of you and your short-sightedness you might soon have difficulties to receive loans from your banks. So you really must have a backup plan. Here http://protectwhatisprecious.com/community/what-is-happening-to-all... you can see some useful discussions about taking loans in the Philippines.

You know, Trump's policy has ever been interesting to me because I rarely can explain what he's doing. I just don't see the reason for the action. I try to be a more reasonable ruler and I usually use this website to get business registration in Hong Kong without any difficulties.

Comment by mr1stroke on February 2, 2020 at 2:11pm
The same sell out who are calling him a racist, when you are about business you dont get personal with no one, business is doing great those business people are not calling him racist or care about what he does in his personal life, only those with agenda and those weak and missguided ones, im about business i support policies, i dont need petty cash or hand outs i have a business to run, but let see how that works for those who keeps calling him racist, either he is your friend or the president, you choose, i wish those same people can tell me what white person in America is not a racist, if the democrats are not racist what have they done for you lately, why do you have so many issues.

Damn, I heard the term sellouts, but this is crazy!

Comment by vaughn mitchell on January 30, 2020 at 3:03pm
Those thirsty black people better understand when the I.R.S. come calling they will pay all that money back from taxes. Oh wait it's Cleveland, don't worry they better save that money. Thirsty black pastor, and thirsty ass black people, they need to get pimped slapped me

Comment by mr1stroke on January 30, 2020 at 9:40am
Robert its not the democrats that i blame its the ignorant nobody self proclaim educated who wont question times and actions, how long have they been voting democrats, what the democrats done for them? Well like you said all i have been seeing are crimes, poverty and hate, they are taking the number one investment from the black community which is home owner ship.

The niggers are so dumb they cannot understand political language, when the democrats talk to black people they say they will provide jobs opportunities, but when they talk to other communities like the Jews they promise them business opportunities, they promise the black community better education but cut funding and consolidate different schools and one building while they close down libraries and hospitals, they promise affordable housing to black people while they promise home ownership to other communities, something i post on here few years ago and i even comment about plenty of times, states like NY says they need $40 billion to fix public housing but they cant afford it for repairs is to privatize NYCHA well guess what niggers never saw it coming its a set up, to enslave them all over again.

The government knows who lives on the projects in NY do you think they will spend that type of money when they can give their selves a raise, so the best way to do it is to push the people into homelessness and those that can afford it they will squeeze every penny put of them, the same state that says they cannot afford it will fund the private companies while they raise rent, set restriction and kick them out, now any one who disagree can prove me wrong with the facts, any one who says the democrats could not pass laws to change things and better the black community they need to bring me their best politicians and pastors and i will embarrass them by proving how they could pass laws to change the issues so if any one believe in their politicians lets have a town hall just me and them, bring 10 or 20 and let see what they have to say i will let you ask the question since youre so smart

Comment by Robert on January 30, 2020 at 9:07am
Where can I get my donation? Democrats have only brought my community poverty ,high crime and more empty promises.

Comment by mr1stroke on January 29, 2020 at 11:43pm
Lol and the negros were happily taking it, thats the one time they dont care about racist as long as they get hand outs, look how long they have been voting for those democrats and they get nothing in return except apologising for being racist, bit dont tell the true niggers that s*** they will argue how good the democrats have been ti the black community