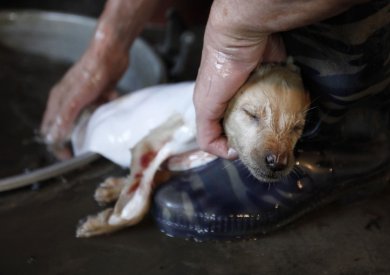 China is the first to draft a law against animal abuse, aiming to protect animals from being hurt or killed. Dog meat has been a source of food in some areas of China since 500 BC and possibly even earlier.

The draft was completed by a group of experts and was due to be raised for legislation in April. The proposal included jailing people who eat dog meat for up to 15 days.

Dog meat is an renowned cuisine in some parts of China, as certain breeds of dogs are raised up to 3 or 4 months old and slaughtered on farms. Eating dog is a socially acceptable practice in parts of southern China.

Check out some graphic photos of dogs being slaughtered in China. 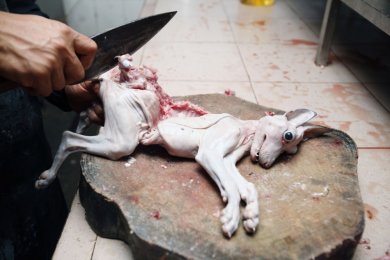 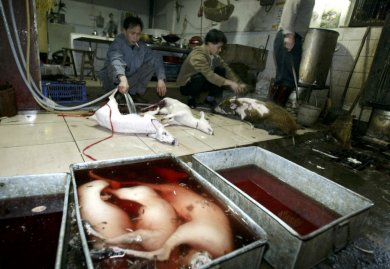 THAT IS WHAT THE PEOPLE EAT.

I DO NOT THINK THEY WILL BE ABLE TO ENFORCE IT.

gwaun mr chin do you ting

who eat meat a bat

the cornel and his chicken

Comment by ghost leigon on July 5, 2011 at 11:52am
they eat guinea pigs in Peru. In some places its set up like a lobster tank in seafood restaurant, you can go and choose your live guinea pig and wait while its killed cleaned and brought to your table. Its been a delicacy for centuries.  At some what you consider a pet in one part of the world is someone's main course special in another.

If I ever make it to China, I'm not EVER eating any unidentiable meat.  If it's fish, it betta have a head.  If it's chicken, it gonna only be the whole wings.  I wonder if they fry the dog meat in the same oil as the chicken wings?