Does This Teacher Need to be Fired? – Her Assignment Compares Pres. Obama to Monkeys! | WATCH 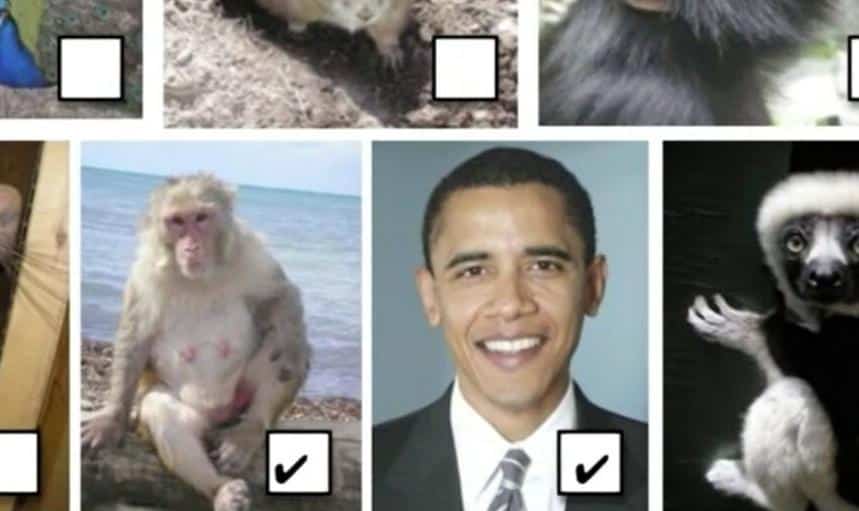 A biology teacher at a Michigan private school for gifted students is on administrative leave after distributing an assignment worksheet last week in which a picture of former US President Barack Obama was included among pictures of several animals, including primates

The teacher’s choice to use the curriculum with the “disturbing racial offense…was inconsistent” with the school’s mission and philosophy, the Roeper School said in a statement to CNN.

Roeper’s middle and high school campus is located in Birmingham, Michigan, a suburb north of Detroit, and is described on its Twitter page as “a uniquely personalized, coeducational school for gifted and talented children in preschool through grade 12.”

“We sincerely apologize for its use and the harm it has caused,” the school said in its statement. “While the teacher has taken responsibility and admits the mistake of not properly vetting the resource, we know that is not enough and she has been placed on administrative leave until further notice.”

CNN obtained a copy of a letter that Head of School David Feldman sent home to Roeper parents on May 17, in which he said he “sincerely” regrets the use of the worksheet and the harm it caused.

“We talk about our commitment to doing the important work of educating ourselves and the community in diversity, equity, inclusion, and justice, and yet on this occasion, we did not live up to our core values,” Feldman said in the letter.

“Our students deserve to learn in an environment that is safe and where they are treated with dignity. And our adults must continue to model how to listen when a community member is hurt, apologize when necessary, and take action to ensure it does not happen again.

“It appears the document was created in 2010 by two undergraduate students as part of an independent study course in evolutionary anthropology. To be clear, this was a student paper. It was never used as a lesson plan in a Duke class or by a Duke faculty member, nor was it promoted as a teaching tool,” Kramer said.

In another letter obtained by CNN, Feldman announced classes were canceled on May 19 as the school was receiving threats on social media.

“Many of you may be aware that a news story about the lesson is now circulating widely online. Unfortunately, this has prompted threats to our community’s safety which we are taking very seriously,” Feldman said in that letter.

A spokesperson for the Birmingham Police Department would not comment on specific threats made to the school.

Kevin Carlson, the parent representative for the school’s board of trustees and a civil rights attorney, declined to comment.

Comment by GWENDOLYN on May 23, 2022 at 3:25pm
HE’S DISGUSTING, AND TH@T QUESTION SHOULDN’T EVEN BE A QUESTION. “SHOULD HE BE FIRED” , U FREAKING THINK. YES INDEED AND HE SHOULD ALSO BE LOCKED UP IN A CAGE LIKE A MONKEY HOW ABOUT THAT.

@Yasmin, your comments speak volumes,,, previous comments I've read from you "Africans are monkeys" as a black man it is ok, whatever race you are a part of it just shows that you are a coward and afraid of us, this nonsense and people like you will never change, if you feel so superior go out in public and show yourself don't be hiding in the shadows making your racist comments

The question is weather or not the teacher should or shouldn't be fired.  But it's not the teacher at fault here, it's the school.  If this wasn't acceptable practice in the school's curriculum, then the teacher wouldn't have done it.  This is what we heard about, but I can only imagine what we didn't hear about all these years.  Nothing surprises me these days.

Comment by vaughn mitchell on May 21, 2022 at 6:20pm
This is why they want to ban their so call critical race theory that teaches about racism, slavery. But promote racism, if that teacher is not fired, I am suing the school, and file a civil rights lawsuit.