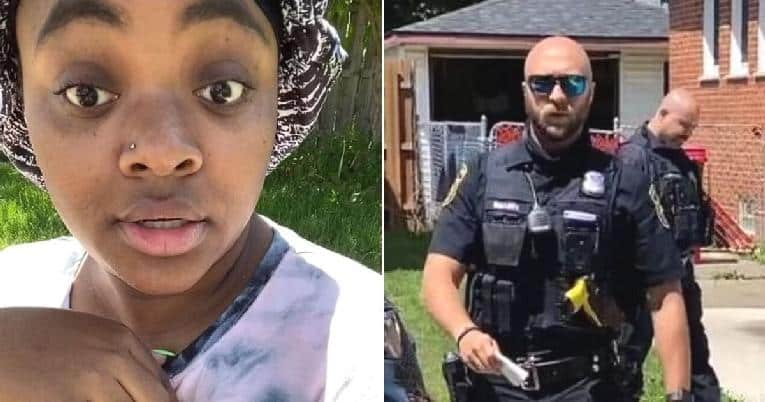 Diamond Robinson, as Fox 2 Detroit, reported, was using her phone on Thursday (05- 27-21) in her neighborhood of Eastpointe and as she walked up and down her block, a new resident – a white woman – asked her to lower her voice or end the call altogether. Robinson’s response was tell the person to “get out of my face” and continued with her cal. And yep, you guessed it, the new neighbor called the cops

When police arrived moments later, Robinson told them that she was documenting the encounter on Facebook Live.

“And I hope you know this is all being recorded,” she is heard saying in the video. “I’m not doing anything wrong by walking up and down the street, talking on my phone.”

We don’t know if it was legal, but Robinson wended up getting a $385 ticket for public nuisance, which she believes was racially motivated.

“You can’t tell me that I’m not being harassed because baby I am…,” she said. “I’ve been living in Eastpointe for five years, and I know what public nuisance is…There’s no way police should be called on me when I am on my own property, in my own neighborhood, on my own block.”

The unnamed neighbor so far hasn’t commented on the situation, but noted that the ticket “speaks for itself.” As for the officers’ response, they said Robinson would have her day in court.

Robinson — who has since installed security cameras outside of her home — is preparing for the forthcoming court date to contest the citation.

“A lot of these things are being pushed under the rug and they don’t need to,” she told Fox 2 Detroit. “We can sit here all day, and we can chant, we can riot, and we can do all of those things. That is not going to make a change if you don’t speak up at that time, at that moment.”

Comment by Lori Graham on May 30, 2021 at 7:55pm
Wrong for giving her that Ticket Racism at its Finest