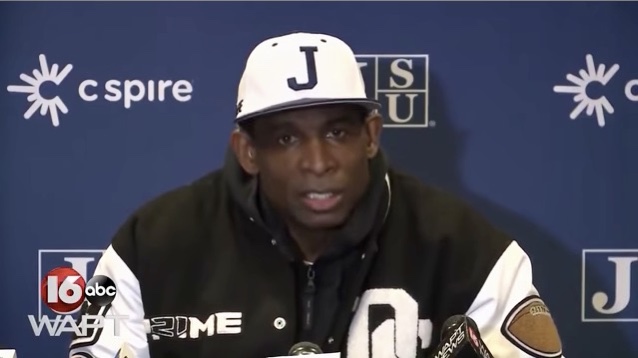 Deion Sanders was flying high Saturday after winning his first game as Jackson State University’s football coach 53-0 over Edward Waters. Then, he got to the locker room at Mississippi Veterans Memorial Stadium and discovered that his personal belongings – including his credit cards, watches and wallet – were gone.

His anger and frustration was apparent during his post-game news conference, where he told reporters that his belongings were “stolen.”

But after the presser, JSU said in an emailed statement that Sanders’ belongings “were misplaced and have been found.”

Sanders was not happy and whipped out another tweet stating, “Whomever putting out the lie that my belongings wasn’t stolen is LYING. My belongings were taken out of a zipped bag in my office and more items were taken as well from my office. We have retrieved them since being reported. My Staff member witnessed the crime.”

On Sunday evening, Sanders addressed a tweet noting JSU’s press release that football staff had “secured” his belongings, and a “miscommunication” led Prime Time to believe his things were stolen.

He responded that his property was indeed stolen, but, “they got it back.” He added, “My assistant caught the gentleman in the process of stealing it but she was alone.”

A JSU spokesperson said that a police report will not be filed.

This marks the second time that Sanders has had property stolen during his JSU tenure. In January, a boombox was stolen from his vehicle and later returned.

With so much fake stuff going on now a days, it is hard to tell where facts end and fiction begins. By the way, Prime Time, you look like a high school football player. I guess you are taking very good care of yourself.  All the Best; maybe we will see you and MC Hammer dancing to the sound of Too Legit To Quit.