As emergency teams provide relief to residents affected by a 5.9 magnitude quake that struck the northern part of Haiti, damaging and destroying buildings, the death toll has risen to 12.

Authorities said that about 188 other people were injured when the tremor occurred around 8:11 p.m. on Saturday, 11 miles northwest of Port-de-Paix, off Haiti’s northern coast. Most of the deceased were in that coastal city, which is about 136 miles from the capital of the French-speaking Caribbean nation.
Homes were destroyed in Port-de-Paix, Gros-Morne, Chansolme and Turtle Island.

The quake was also felt lightly in the capital, as well as in the neighbouring Dominican Republic – with which Haiti shares the island of Hispaniola – and in eastern Cuba, where no damage was reported.

After the tremor, which occurred almost nine years after a 7.0 magnitude quake shook Port-au-Prince and left more than 300,000 people dead, President Jovenel Moïse appealed for calm.

“I urge the population to keep calm . . . . The [disaster] risk management system and the regional branches of the Civil Protection are on standby to assist the inhabitants of the affected areas,” he posted on Twitter.

Then yesterday, as survivors were shifting through the rubble of Saturday’s tremor and relief was being provided to affected residents, the first significant aftershock – a 5.2 magnitude tremor – occurred in around the same location. Its epicentre was located 9.8 miles north-northwest of Port-de-Paix and it had a depth of 10 kilometres.

“The Secretary-General is saddened to learn of the tragic loss of life and injuries caused by the earthquake in north-west Haiti on 6 October,” said a statement issued by Guterres’ spokesperson yesterday.

“The United Nations stands ready to support the Government of Haiti in the response efforts.”

Saturday’s quake was the strongest earthquake to hit Haiti since the 2010 quake. A bed is covered by rubble from a wall that collapsed during a magnitude 5.9 earthquake the night before, in Gros Morne, Haiti, Sunday, Oct. 7, 2018. Emergency teams worked to provide relief in Haiti on Sunday after the quake killed at least 11 people and left dozens injured.

Emergency teams worked to provide relief in Haiti on Sunday after a magnitude 5.9 earthquake killed 11 people and left 135 injured.

The country’s civil protection agency said that at least seven people died in the coastal city of Port-de-Paix and three people died in the nearby community of Gros-Morne in the province of Artibonite. It said that the injured were being treated at medical centers in the northern part of the country.

“I feel like my life is not safe here,” said nun Maryse Alsaint, director of the San Gabriel National School in Gros-Morne, where several classrooms were severely damaged.

She said that about 500 students would not be able to return to school on Monday.

It was felt lightly in the capital, as well as in the neighboring Dominican Republic and in eastern Cuba, where no damage was reported.

Rescue workers in Haiti said they were not looking for any more victims, although residents appeared to be jolted by the shake.

In Gros-Morne, some people walked along the street while looking up at the cracked exterior walls of homes. Dozens of others sifted through debris before hauling away rebar to recycle and sell.

The civil protection agency issued a statement saying that some houses were destroyed in Port-de-Paix, Gros-Morne, Chansolme and Turtle Island. Among the structures damaged was the Saint-Michel church in Plaisance.

Damage was also reported at the police station in Port-de-Paix, and parts of a hospital and an auditorium collapsed in Gros-Morne. Parliamentarian Alcide Audne told The Associated Press that two of the deaths occurred in the auditorium.

Haiti President Jovenel Moise indicated in his Twitter account Sunday that civil protection brigades were working to clear debris and help victims. He also said the government had sent water and food.

Impoverished Haiti, where many live in tenuous circumstances, is especially vulnerable to earthquakes. A vastly larger magnitude 7.1 quake damaged much of the capital in 2010 and killed an estimated 300,000 people. 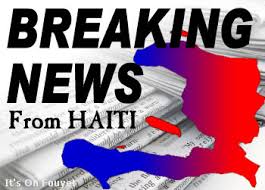 Quake strikes in the north-west of Caribbean island, damaging buildings, including a hospital, auditorium and police station


An earthquake that struck off the northern coast of Haiti has killed at least 11 people and injured more than a hundred when several buildings collapsed.

The 5.9-magnitude quake struck near the northernmost tip of Haiti late on Saturday, causing damage to buildings, including an auditorium that collapsed and a hospital, authorities and media reported.

The quake struck about 20 km (12.3 miles), north-west of the port of Port-de-Paix, the US Geological Survey said.


The police chief for the north-west region, Jackson Hilaire, said at least seven people were killed and more than 100 injured in Port-de-Paix. Another four people died in and around the town of Gros-Morne further south, including a boy struck by a falling building, said the mayor, Jean Renel Tide.

Rescue workers reported the collapse of part of a hospital and an auditorium as the quake hit on a rainy evening.

The quake was one of the strongest to hit Haiti since a 7.0-magnitude quake struck near the capital, Port-au-Prince, in 2010, killing thousands of people in the impoverished Caribbean country.

In a post on Twitter, Haiti’s president, Jovenel Moïse, urged people to remain calm after the civil protection agency said the quake caused injuries and panic in northern towns.

Le Nouvelliste newspaper said one person died when an auditorium collapsed in Gros Morne, and that detainees were released from a police holding cell that was damaged. Reuters could not immediately confirm the report.

The tremor damaged the facade of a church in the town of Plaisance and a house next door collapsed, Frantz Duval, a journalist with le Nouvelliste, said on Twitter.

Initial reports on social media said Saturday’s quake was felt in Port-au-Prince but had not caused major damage there.

Comment by vaughn mitchell on October 8, 2018 at 8:59pm
That country is always getting earthquakes. Damn