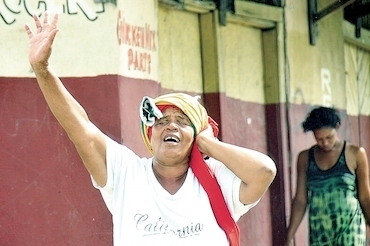 THE number of civilians confirmed killed in the security force operation in West Kingston has reached 44.

Political Ombudsman Herro Blair, speaking on RJR 94 FM, said that he had counted 35 at the morgue with another nine bodies awaiting collection.

Meantime Public Defender Earl Witter is questioning the disparity between numbers killed and the number of firearms seized. Security forces have so far accounted for four firearms seized.

Witter added that he saw no sign of bodies being burned as alleged by persons claiming to be residents who called media houses during the assault on Tivoli Gardens and Denham Town which began Sunday.

One soldier and seven members of the security forces were injured after security forces entered the West Kingston communities to execute a search warrant for reputed local area don Christopher 'Dudus' Coke.

Coke is wanted for extradition to the United States on gun and drug trafficking charges. He is still at large.

Comment by okusitino finau on May 27, 2010 at 12:05am
unity is needed in this hour of chaos....my prays are with the people of Jamaica, and the children of the world who have to live in this atmosphere!!!! jah bless the children! 1luv

More Peace! Stop these wars and killings... Jah will Guide

Comment by Sweet D on May 26, 2010 at 8:41pm
@Dr. Ray Blanchette THis music is very much annoying. Its on every single blog I read and I constantly have to scroll so far to turn it off.

Comment by Dr. Ray Blanchette on May 26, 2010 at 7:50pm
@Sufferahsmusic I find your music promotion offensive and insulting to myself and the serious people who choose to read these post on Caribbean Fever. You pretend to have interest in the blog post discussion, but you're not concerned or interested at all. All your doing is promoting your crap music on EVERY SINGLE DAMN POST. STOP IT. I don't want to have to turn your S*** OFF every time I read a post. People are reading about and addressing very serious issues and are expressing heart felt opinions THAT AFFECT A GOOD MANY OF THE READERS HERE and there we have you promoting your GARBAGE. Get your own network, or website, or WHATEVER and promote your s*** there. Your're like a damn phone call that nobody wants to answer. Can't you take A HINT!

Comment by Proudlady on May 26, 2010 at 5:50pm
This is sad. Why so many people must die over and for one man? He must be someone very special for all of this to take place. :-( Very depressing to see where this is going.