Francisco Garcia, seen in the black t-shirt and Yankees cap, kneels on a man's head after punching him during social distancing enforcement in the East Village

More than 90 percent of those arrested for violating social distancing rules in New York City during the first six weeks of the pandemic were black or Hispanic, according to leaked data that the Mayor's Office and the NYPD have declined to release, despite promises to make it publicly available.

On Thursday night, CBS2 reported that police issued 368 summonses and arrested 120 people for social distancing offenses between March 16th and May 5th.

Black New Yorkers, who make up a quarter of the city's population, accounted for more than two-thirds of those arrests; 24 percent of those arrested were Hispanic; white people made up just seven percent of all arrests.

The stark disparities were also evident in an analysis released on Friday by the Brooklyn District Attorney's Office, which found that 39 of 40 people arrested in the borough for social distancing violations were people of color.

While the de Blasio administration has pledged to publicly release their own demographic breakdowns this week, they still had not done so as of noon on Friday. A spokesperson for the Mayor's Office said the reported data was preliminary. [UPDATE: The NYPD has released a partial breakdown of summonses by race, which also show intense disparities. Scroll down for those numbers.]

Public Advocate Jumaane Williams accused the mayor of intentionally withholding the figures for political reasons. "The administration stalled to deliver this data, and now we know why," he said in a statement. "After weeks of pressure, this reveals what we we suspected, feared, and warned against."

The numbers bolster mounting allegations of unequal policing during the public health crisis, raised by a number of black leaders and officials in response to videos showing brutal police encounters in the last week.

This evening in Manhattan, an NYPD officer approaches a group of people filming an arrest, deploys his taser indiscriminately, then grabs a young man and, without provocation, slams him to the ground, starts beating him and, with another cop, handcuffs him. 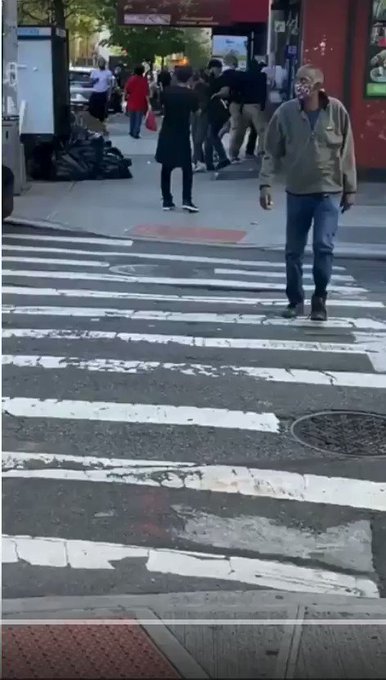 4,575 people are talking about this

In one confrontation on Saturday, which the mayor described as "particularly heinous," NYPD Officer Francisco Garcia was seen beating a black NYCHA caretaker who'd witnessed a social distancing stop on the Lower East Side — sending him to the hospital, and prompting an internal affairs investigation. Garcia, who has been sued at least seven times for misconduct, was placed on modified duty, but has not yet been suspended.

The following day, officers in East New York's 75th Precinct punched a 20-year-old in the head, then threatened his friends with arrest for standing on a stoop without masks. Another video in the same precinct surfaced this week showing officers and an NYPD Commander — many of them not wearing face coverings — violently arresting bystanders for little discernible reason.

Pastor Gilford Monrose, who leads the 67th Precinct clergy council in Flatbush, said he’d received an influx of calls from community members about aggressive arrests. “It’s another form of stop and frisk. It’s another excuse,” he said this week.

De Blasio has brushed off those criticisms, characterizing recent videos as isolated incidents. "I’m not going to sacrifice saving lives because people are fearful of something that loomed in the past," he said on Thursday.

In response to the Brooklyn DA's figures, the mayor said he would not accept disparities in enforcement. But he declined to criticize the department's overall enforcement strategy, and disputed that the evidence of discriminatory arrests represented a significant problem.

"There’s been a huge amount of restraint by the NYPD, that’s just factually obvious from the numbers," he said during his daily press briefing.

Passing out masks to white folks not social distancing, while literally having their foots on our necks.

This is beyond ridiculous at this point. 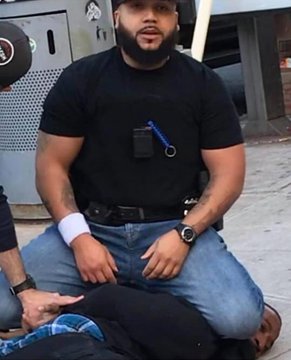 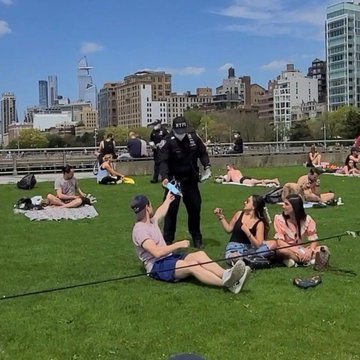 18.1K people are talking about this

According to public defenders with the Legal Aid Society, the number of summonses and arrests likely understates the scale of enforcement in black neighborhoods. They say police have used alleged social distancing infractions as a pretext to arrest people... for minor offenses, such as marijuana possession, or on nebulous charges like obstructing governmental administration.

The Brooklyn DA’s office has declined to prosecute low-level cases during the COVID-19 cases. A spokesperson for the NYPD described that decision as “troubling” to Gothamist.

Asked about recent instances of brutality, NYPD Commissioner Dermot Shea maintained there was no pattern of disparate enforcement against communities of color, claiming the "the common denominator here is starting with a lack of compliance."

Police reform advocates say the unequal enforcement — like similarly lopsided arrest totals for marijuana or fare evasion — is the predictable result of the continued over-policing of black and Hispanic neighborhoods.

"The stark racial disparities reflected in the initial release of NYPD social distancing enforcement confirms what Black and other New Yorkers of color already knew," said Joo-Hyun Kang with Communities United for Police Reform. "NYPD enforcing social distancing will harm public health and inevitably result in racial disparities and violent policing of Black and other communities of color."

Repeated requests to the NYPD for complete demographic and neighborhood data on social distancing were not returned. We’ll update this story if we hear back.

UPDATE: Following publication of this story, the NYPD released partial data showing the racial disparities in social distancing enforcement across the city. Between May 5th and March 16, police issued 374 summonses for “acts likely to spread disease and to violate emergency measures.” The vast majority of the summonses were issued to people of color — 193 to black men and women and 111 to Hispanics. Brooklyn led all boroughs by far with 206 summonses, followed by the Bronx with 99. Just 41 people were cited in Manhattan, 28 in Queens, and none in Staten Island. The NYPD did not include demographic data on those arrested, which Commissioner Shea previously vowed to make public. The figures were also not broken down by specific neighborhood. It's unclear what charges the alleged offenders face, beyond receiving a ”COVID-19 related criminal court summons.”

Comment by vaughn mitchell on May 12, 2020 at 1:01am
What does he care he is not getting elected, he is white, what did black people expect just because he has a black wife he would be different. He apologize to the Jewish community, but not to black people, who cops were attacking.