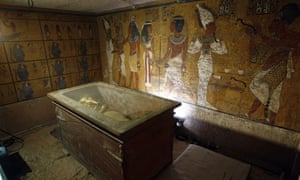 The sarcophagus of King Tutankhamun in its burial chamber after the mummy was placed in a glass urn designed to protect the remains of the ancient king from humidity and other contamination.

A dagger entombed with King Tutankhamun was made with iron from a meteorite, a new analysis on the metal composition shows.

In 1925, archaeologist Howard Carter found two daggers, one iron and one with a blade of gold, within the wrapping of the teenage king, who was mummified more than 3,300 years ago. The iron blade, which had a gold handle, rock crystal pommel and lily and jackal-decorated sheath, has puzzled researchers in the decades since Carter’s discovery: ironwork was rare in ancient Egypt, and the dagger’s metal had not rusted. 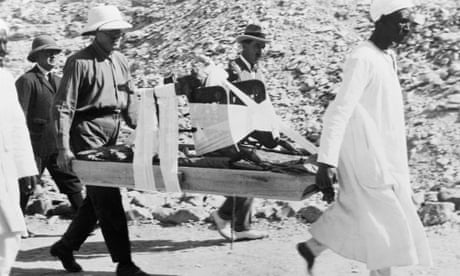 
Italian and Egyptian researchers analyzed the metal with an X-ray fluorescence spectrometer to determine its chemical composition, and found its high nickel content, along with its levels of cobalt, “strongly suggests an extraterrestrial origin”. They compared the composition to known meteorites within 2,000km around the Red Sea coast of Egypt, and found similar levels in one meteorite.

That meteorite, named Kharga, was found 150 miles west of Alexandria, at the seaport city of Mersa Matruh, which in the age of Alexander the Great – the fourth century BC – was known as Amunia.

The researchers published their findings on Tuesday in the journal Meteoritics & Planetary Science.

Although people have worked with copper, bronze and gold since 4,000BC, ironwork came much later, and was rare in ancient Egypt. In 2013, nine blackened iron beads, excavated from a cemetery near the Nile in northern Egypt, were found to have been beaten out of meteorite fragments, and also a nickel-iron alloy. The beads are far older than the young pharaoh, dating to 3,200BC.

“As the only two valuable iron artifacts from ancient Egypt so far accurately analyzed are of meteoritic origin,” the team that studied the knife wrote, “we suggest that ancient Egyptians attributed great value to meteoritic iron for the production of fine ornamental or ceremonial objects.”

The researchers also stood with a hypothesis that ancient Egyptians placed great importance on rocks falling from the sky. They suggested that the finding of a meteorite-made dagger adds meaning to the use of the term “iron” in ancient texts, and noted around the 13th century BC, a term “literally translated as ‘iron of the sky’ came into use … to describe all types of iron”.

“The introduction of the new composite term suggests that the ancient Egyptians were aware that these rare chunks of iron fell from the sky already in the 13th [century] BCE, anticipating Western culture by more than two millennia,” the researchers wrote

Egyptologist Joyce Tyldesley, of the University of Manchester, similarly argued that ancient Egyptians would have revered celestial objects that had plunged to earth.

“The sky was very important to the ancient Egyptians,” she told Nature, apropos of her work on the meteoritic beads. “Something that falls from the sky is going to be considered as a gift from the gods.”

The high quality of the blade suggests that Tutankhamun, who lived during the latest stage of the Bronze Age, was supported by ironworkers who were skilled despite the relative rarity of the material.

The blade may not be the only item derived from falling rocks in Tut’s tomb.

In 2006, an Austrian astrochemist proposed that an unusual yellowish gem, shaped as a scarab in King Tut’s burial necklace, is actually glass formed in the heat of a meteorite crashing into sand.

“It would be very interesting to analyze more pre-Iron Age artifacts, such as other iron objects found in King Tut’s tomb,” Daniela Comelli, of the physics department at Milan Polytechnic, told Discovery News. “We could gain precious insights into metal working technologies in ancient Egypt and the Mediterranean.”