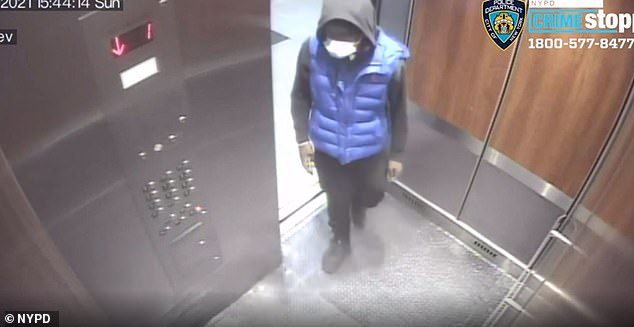 A shocking video captured the moment an 85-year-old woman was slammed into a wall inside a Bronx apartment building after a cold-hearted thief dragged her out of an elevator by her cane and rifled through her purse.

The NYPD shared surveillance video on Monday of the robbery at the building on E. 149th St. and Morris Ave. in Mott Haven at 3:10 p.m. Sunday as the city's spiraling crime keeps sinking to new depths.

The attack came on the same day as four violent incidents were reported in various locations throughout the crime-ridden subway system, including one where a man was pushed on the tracks but managed to climb to safety.

In the attack on the elderly woman, the callous thief, who was wearing a surgical mask on his face and a hoodie to hide his identity, walked into the elevator of the complex on the first floor and road with the elderly woman up to the sixth floor.

He then got out when the doors opened, appeared to look down the floor's hall to make sure no residents were out of their apartments and then went back inside the elevator to steal the elderly woman’s purse.

To make her let go of her meager possession, the thief pulled the victim by her cane into the hallway wall, knocking her to the ground. 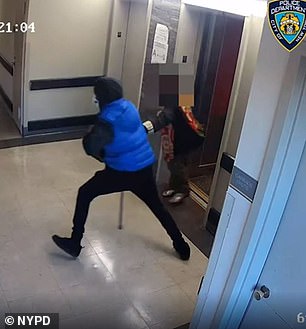 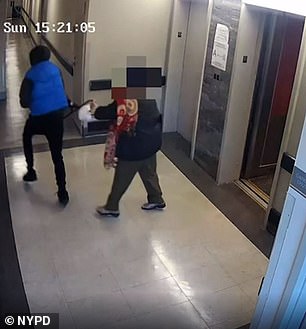 The cold-hearted thief, whose was wearing a surgical mask and a hoodie to hide his identity, walked into the elevator of the complex on the first floor and road with an 85-year-old woman up to the sixth floor before dragging her out of the lift by her cane and stealing her purse

The thief can later be seen reentering the elevator after the incident, with an unclear amount of cash in hand 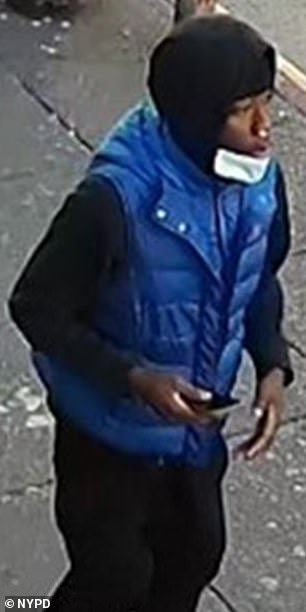 Later in the day, the thief was seen entering the elevator again with a stack of cash in his hand, believed to be from the purse. The amount of money he stole is unclear.

The NYPD told Dailymail.com that no arrests have been made.

The suspect was last seen wearing black sweatpants with a blue puffer jacket.

Anyone with information is asked to call Crime Stoppers at 1-800-577-TIPS.

In the subway system, the first attack took place at around 2.30 a.m. Sunday in Brooklyn, where an unidentified male suspect threw a container of liquid at an MTA subway conductor on a northbound R train at the 77th Street station.

The conductor was taken to NYU Langone Hospital. No arrests have been made.

In TriBeCa, another male suspect stabbed a 29-year-old woman on a southbound C train near Chambers Street at 8am.

The man punched the victim twice in the back of the head before she pushed him back. The man then took out an unknown sharp object and stabbed her in the left abdomen and left groin, police said.

The woman was brought to Bellevue Hospital. She is in stable condition, according to the NYPD, who said the suspect fled the scene. No arrests have been made.

At 11 am, a 31-year-old Delaware man traveling in Brooklyn got off at a southbound R train at the 36th Street and Fourth Avenue station and was pushed onto the subway tracks while he was waiting for another train in an unprovoked incident.

The NYPD confirmed the victim managed to pull himself from the tracks before being brought to NYU Langone with a possible fractured wrist. The suspect fled on a southbound R train and was later arrested.

Later that night, police said a male suspect fired about four gunshots inside the East Broadway station in Lower Manhattan.

The NYPD said the suspect had gotten into a heated exchange with several other people in the station. No injuries or deaths were reported.

Police are still looking for the suspect who fled the scene. 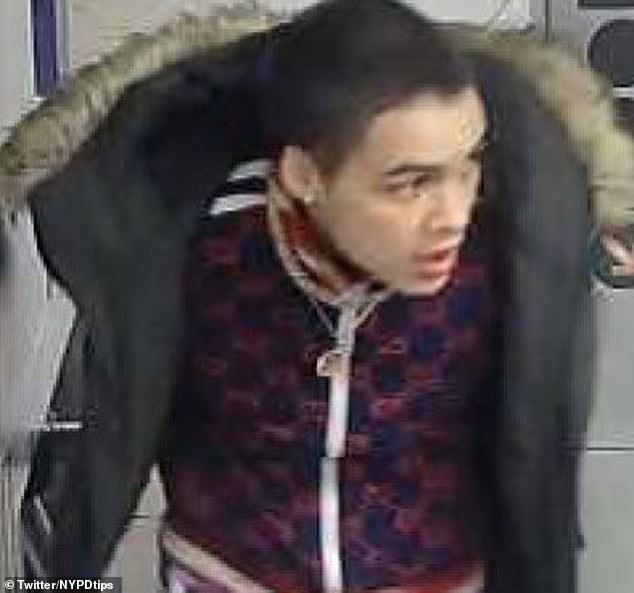 In 2021, crime statistics published by the NYPD show that nearly all types of crimes, including shootings, murders and auto grand larceny, have all nearly doubled in the Big Apple since pre-pandemic times.

There have been 1,470 shootings, 443 murders and 9,595 cases of auto grand larceny, according to the latest data for the year. 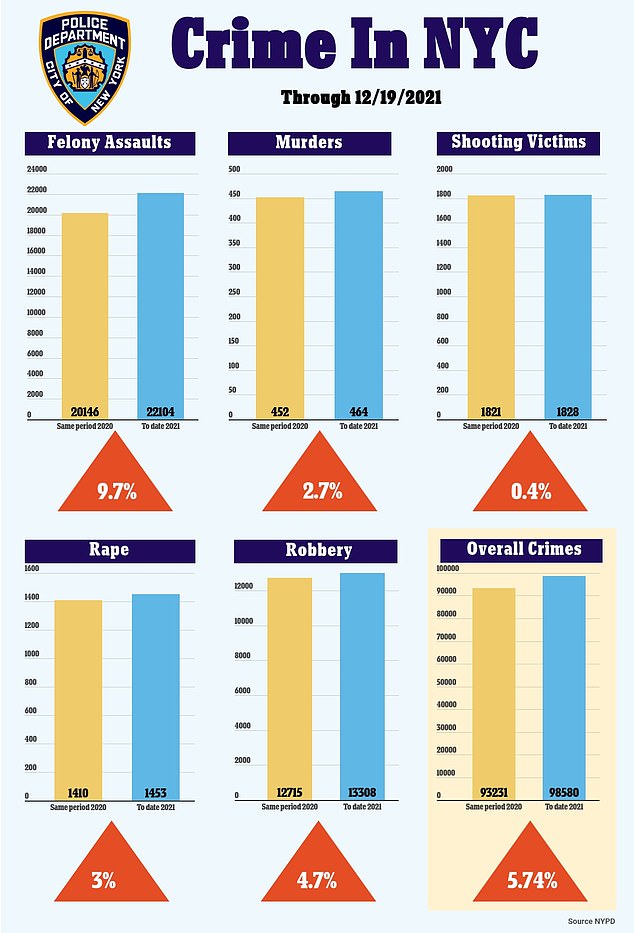 Crime statistics published by the NYPD show shootings, murders and auto grand larceny have all nearly doubled in the Big Apple since the start of the coronavirus pandemic. As of Dec 19, the city's murder rate is up by 2.7 percent compared to the same period in 2020

Comment by vaughn mitchell on December 28, 2021 at 4:20pm
His black ass is caught. Facemask down, he better turn himself in, cause if the cops get him and beat his ass, no one will say a word.

Comment by mr1stroke on December 28, 2021 at 2:08pm
There is nothing new, NY is a dump and for the next year, the crimes will be so high and fast, watch how many will be crying and begging for mercy on National TV, the life you build is the life you live, you make poor political decisions, relying on dumb politicians, allowing your human rights to be violated by con politicians like Cuomo, you live without class allowing those who are destroying the community to live next to you freely without taking action, you don't care about your own community which is why you don't have a community, if you don't invest in your self why should you care, how many of you own a home, of course no one cares about some project apartments or any building apartments that they don't own, white people will call the cops on you in a minute not only because you are black when they see you in their neighborhood but because they are also protecting their investments, so get used to the high crimes areas