In a bizarre turn of events, MSNBC's Lawrence O'Donnell interviewed an empty chair on his program Monday night, after scheduled guest Craig Sonner reportedly fled from an MSNBC studio in Orlando just moments before the show began.

Sonner represents George Zimmerman, the former neighborhood watchman who shot and killed 17-year-old Florida resident Trayvon Martin in February. His appearance on O'Donnell's program would have been just the latest in a string of high-profile media interviews over the past several days, as he's attempted to shift the the narrative surrounding the case. In previous conversations, Sonner has continually insisted that the shooting was motivated not by race, but was instead a matter of self-defense -- though the attorney has declined to answer several questions about the specifics of his client's defense.

O'Donnell characterized Sonner's previous interviews as lacking in rigor, and claimed that it was his more aggressive approach to interviewing that scared the attorney away:

Craig Sonner has been the first guest in the history of this particular show, to get scared, to be terrified, so terrified of coming on this show that he has literally run away. He's in our car right now, taking him home from our studio, afraid to face the questioning he would face on this show. Watch out for wherever Craig Sonner shows up next on television, because wherever he shows up next on television has an obligation to put him through serious questioning about what he's doing and what he knows, and the contradictions in the things he's already said on television.
Later on during the segment, O'Donnell turned to Sonner's empty chair and began reciting the many questions he had planned for the aborted interview. Those questions included:

•"Does George Zimmerman have a job?"

•"Did you represent him when he was arrested for assault on a police officer in 2005?"

•"Your client was not injured enough to go to the hospital that night. You say he sought some sort of medical treatment the next day. Do you have those medical records that you can show us?"

Watch the entire interview below: 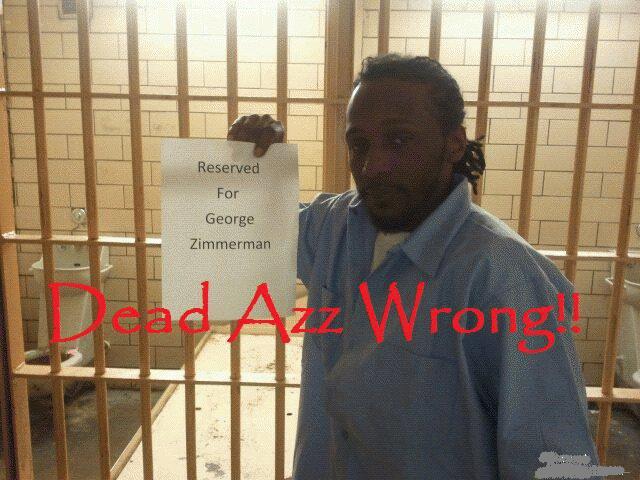 ARREST THAT BASTARD ZIMMERMAN AND LET THE INMATES TAKE CARE OF HIS ASS!!!

THESE RACIST IGNORANT REDNECKS DOWN SOUTH ARE OUT OF CONTROL!!!

TRAYVON'S PARENTS NEED TO START A CIVIL SUIT AGAINST ZIMMERMAN; SUE THE POLICE DEPARTMENT FOR NOT HANDLING THIS CRIME CORRECTLY; SUE THE STATE OF FLORIDA.

LORD GOD WHEN WILL THIS MADDNESS STOP???

And now we know why George Zimmerman didn't get arrested..
According to court records: George Zimmerman is the son of retired Virginia Supreme Court magistrate Judge Robert J. Zimmerman, his mother Gladys Zimmerman is a court clerk....He has three closed arrests
7/18/05 for resisting an officer w/violence, and battery on a law enforcement Officer div 10...
8/9/05 for domestic violence div 44...
8/10/05 for domestic violence div 46..

I knew that they was going to do that to him “Trayvon”, I said before that these white folks in the south are no good and mean is hell. These folks have no shame whatsoever showing their contempt and hatred for black people.

Comment by www.jaxsprats.com on March 27, 2012 at 11:46am
They are committing a malicious campaign to discredit Trayvon Martin's image which is inhumane and despicable. Justice for Trayvon Martin.