The five Cleveland cops who took part in the 137-shot, execution-style fusillade that killed an unarmed couple over a traffic violation will all get their jobs back.

In what can only be referred to as a travesty of justice and a disgrace to the integrity of police departments nationwide, five officers who took part in the 137-shot, execution-style fusillade that killed an unarmed couple — will get their jobs back.

The sixth cop, Michael Brelo will remain free from jail but has been fired. He has since become a gypsy cop, scrounging for a job at any department that will hire him.

The shooting came at the end of a November 12, 2012 high-speed chase involving more than 100 officers and 62 police vehicles to go after Timothy Russell and Malissa Williams. The pursuit began when officers standing outside police headquarters mistook the sound of Russell’s backfiring Chevy Malibu for gunfire. When the car stopped outside city limits, officers opened fire, perforating Russell with 24 shots and Williams with 23.

The shooting lasted 19.3 seconds. For anyone who’s ever been to a shooting range or is familiar with firing weapons, 19.3 seconds would seem like an eternity as all those rounds were flying down range. To discount the malicious intent of these officers continuing to fire after the first few seconds is outright criminal. 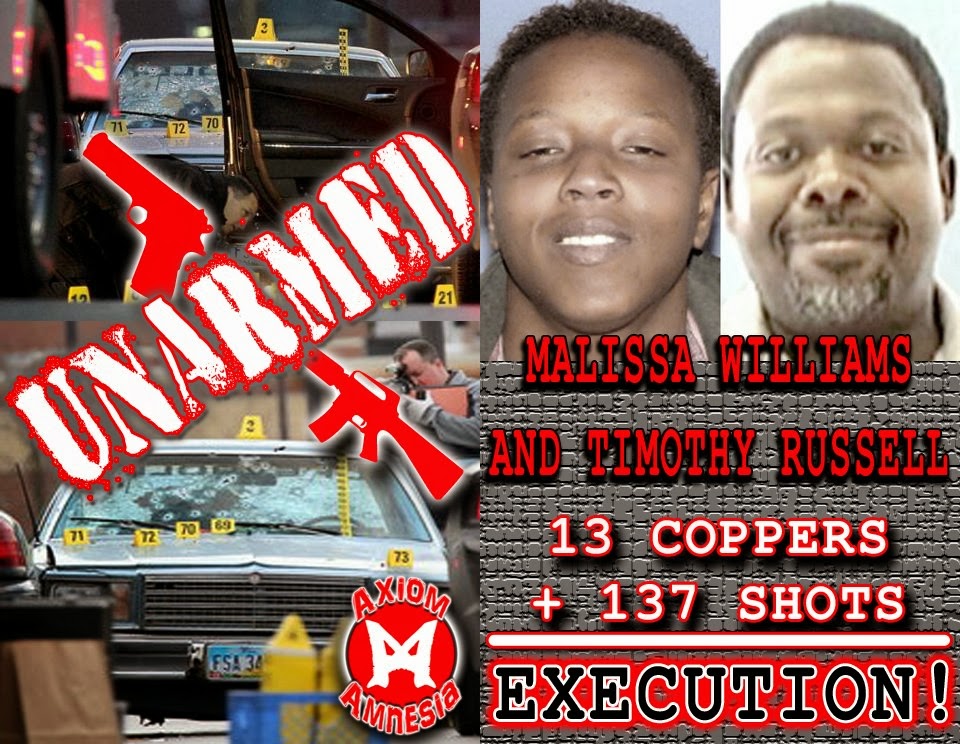 Neither of the victims were armed, or suspected of anything more serious than traffic violations resulting from the pursuit. A search of the vehicle following the double homicide revealed a crack pipe. Both Russell and Williams had been diagnosed as mentally ill.

The city has since paid $3 million each to the families of Russell and Williams to settle a lawsuit.

Brelo, the ring-leading murderer, fired 49 rounds, including the last 15 after he jumped up on the hood of the car in a wild west fashion. In spite of this horrifying display of aggression, a judge acquitted him of manslaughter charges at trial.

Officers Wilfredo Diaz, Brian Sabolik and Michael Farley and detectives Christopher Ereg and Erin O’Donnell fired the remaining shots in a gross display of excessive deadly force. They were also all acquitted.

Brelo was acquitted in a bench trial after W. Ken Katsaris, a retired sheriff and “expert witness” specializing in testimony tailored to exonerate police officers, testified that Brelo’s only mistake was to expose himself to potential danger, thereby potentially inhibiting his colleagues as they unleashed gunfire in the direction of the vehicle.

By leaping on top of the hood of the car, Brelo was “taking action that is not trained, not recognized, not safe, and put all of the other officers in the vicinity of his becoming a victim and their [the other officers] having to attempt to now engage to save his life,” Katsaris testified before trial judge John P. O’Donnell, who in predictable fashion exonerated the officer.

“We believe that the City’s decision to terminate the other five officers was justified and should have been upheld,” Cleveland Mayor Frank Jackson said in a statement this week. “We acknowledge that the arbitrator concluded that those officers committed serious policy violations; however, we are reviewing our options regarding the officers whose terminations were not upheld.”

Naturally, the police funded defense attorney is defending the decision and disgustingly referring to the officers — who murdered an unarmed couple over a traffic violation — as exemplary.

“It was a difficult case for both sides and a gratifying outcome,” defense attorney, Patrick D’Angelo, who represents the Cleveland Police Patrolmen’s Association, the union of rank-and-file officers, said. “We realize we didn’t prevail in everything that we were seeking but we saved the career of five fine officers.”

In the eyes of the police union, six cops dumping 137 rounds into an unarmed couple is ‘fine’ work.

“Hopefully after further deliberations by both parties, this should be the end of this saga,” D’Angelo said. “Hopefully there will be no appeal and we can go forward.”

As for Brelo, he is still eligible to be hired by other departments. For unloading 49 rounds into an unarmed couple, 15 of which a court, the department, and the arbitrator all agreed were ‘egregious’ in nature, Brelo could very well be back on the street in no time.

“Indeed Officer Brelo never offered a reason or an explanation for these actions,” Arbitrator William Heekin wrote in his ruling. “Accordingly and upon finding that this clearly constituted an excessive use of deadly force, the contention of the City that it amounted to egregious misconduct where as a result the City no longer has trust and confidence in his ability to carry out the duties and responsibilities of a police officer is accepted.”

For clearly using excessive deadly force, however, Brelo and his murderous accomplices will face no consequences.

“It’s tragic that it went down this way, but at the end of the day, two people high on crack cocaine, high on marijuana, one of them intoxicated, made the decisions that they made and we responded to them,” union spokesman Steve Loomis said after the officers were acquitted. “And we responded within our training.”

As the late William Grigg noted in his coverage of this case for the Free Thought Project last year:

This is precisely the problem: Cleveland police, like their comrades nation-wide, are trained to kill people for reasons that will not withstand rational scrutiny — and they are expected to be rewarded  for doing so.

d for doing so.

tempo Correction, they did it in South Africa and the Israelis do it to the Palestinians and by the way, police in America go to train in Israel 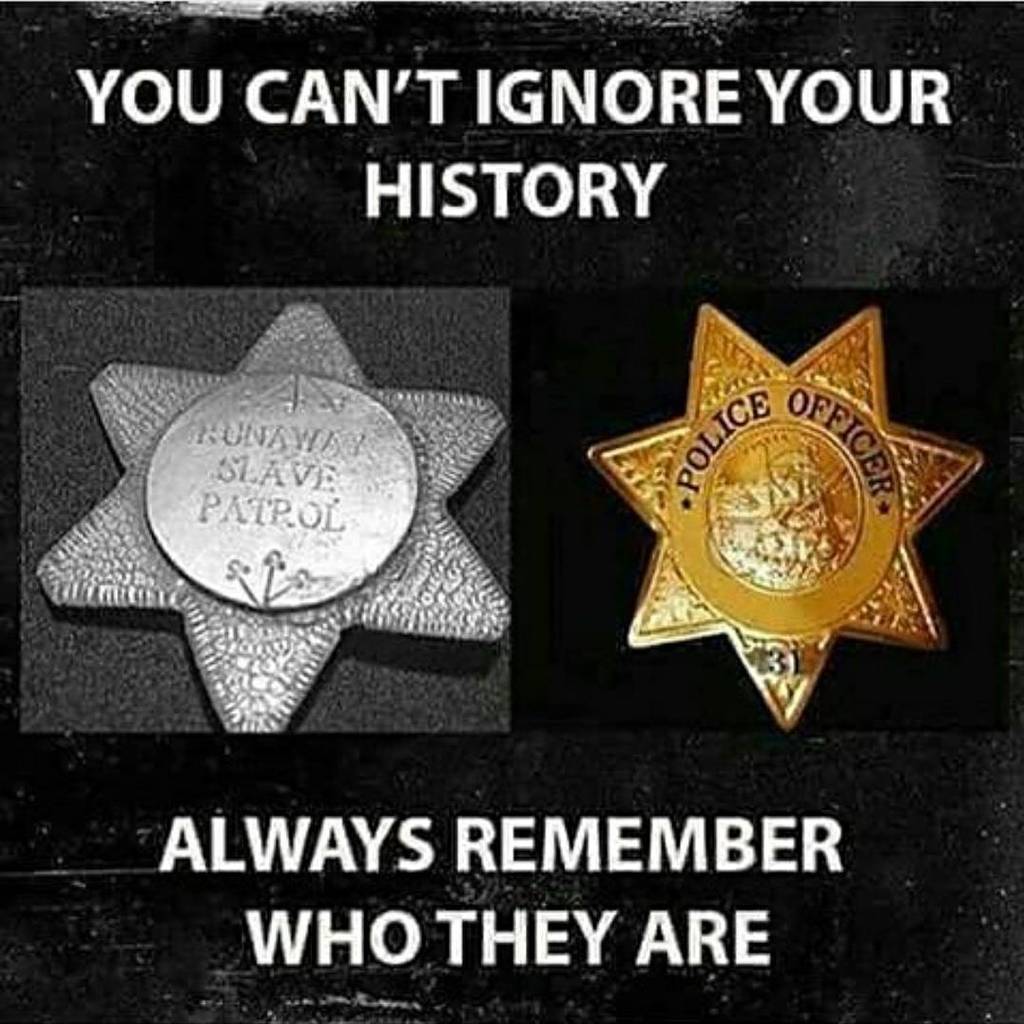 Comment by Omar on June 19, 2017 at 3:21pm
@Keny. GUILTY ON ALL COUNTS. Some of my melinated Brothers & Sistahs have forgotten what's going on in their homeland. The current occupying military regime cares not for the original habitants still living on their soil and wish nothing more then to exterminate us all. Either that or relocate us. To be honest, I don't think they want us to be situated anywhere in the world. If they had it their way, we'd all just evaporate into thin air.