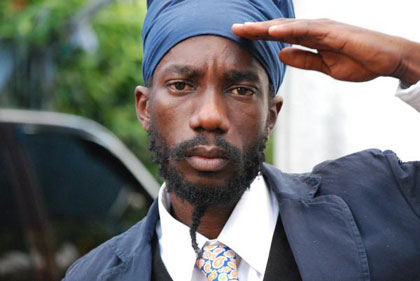 Popular Rastafarian reggae artiste Sizzla Kalonji was arrested on Wednesday by police personnel from the St Andrew Central police following reports that gunshots were fired at a group of persons at a river in August Town.

"The incident occurred sometime around 8:15 p.m and we responded and Sizzla was arrested about 15 minutes later," DSP Knight said before adding that Sizzla is in the process of being interrogated and his hands were also swabbed for gunpowder.

Reports summarise that a number of persons were catching water at a river when an armed man approached them and fired several shots in their direction. No one was injured.

Further reports are that a number of persons subsequently reported to the police and identified Sizzla as the shooter.

Asked what is the theorised reason behind the shooting, Knight, though not confirming, explained that a number of areas in August Town are currently at odds.

"Well that is what happened based on the reports we have ... We are investigating but we know that a number of places like Judgement Yard, Goldsmith Villa and Hermitage have constant friction, so we are looking into that," Knight said.

This is not Sizzla's first run-in with the law.

In 2005, he was taken into custody and questioned in relation to 13 high-powered guns the police dug out of a hole in the Judgement Yard section of August Town.

He was held and interrogated for three days but was released as he denied having any knowledge of the guns.

Sizzla is known for songs like Black Woman and Child, Dry Cry, and Rise to the Occasion

Comment by earl brown on February 2, 2010 at 4:44pm
I would in no way condone any acts of violence especially with guns involve.But let us not be too quick to judge until the truth unfolds.

@ john Crow - To get rid of the gun culture requires dealing with the roots of the situation. Certain nations on Earth produce and market guns on an increasingly unacceptable level. WE, as Afrikans, owe it to Our ancestors and Our progeny to assist with the ongoing deconstruction and fundamental re-arrangement of Euro-America and its inhuman Capitalist economic system. As original peoples, WE know that the world is abundant in all things good and that guns do not have to dominate Our interconnected global consciousness. Unconditional love for Ja, Judgement Yard, Sizzla Kalonji and Moor Infinite Fyah pan de gun producers and traffickers of Our world ~

Comment by john Crow on January 31, 2010 at 2:39pm
Whether it is SIZZLA or not who fired the shots, that is not the question. Sizzla can take care of himself.
There is a larger concern. That is: How do we get rid of this gun culture that we have adopted in our communities?

Comment by Allison Moore on January 31, 2010 at 2:13pm
They are quick to put the story out to make SIZZLA of all people look so bad but where is the rest of the story?? people catchin water at the river and he just starts shooting? That sound like foolishness don't believe it

Comment by BabyGirlBubble**JamaicanPrincess on January 30, 2010 at 8:47pm
OK PEOPLE.. U HAVE TO GET HE FACTS STRAIGHT.. I WONT GIVE MY CLEAR APPROACH UNTIL I HAVE THE RIGHT FACTS. R THEY SURE IT WAS HIM WHO FIRED THE SHOTS?

Comment by priscilla patterson on January 30, 2010 at 7:52pm
what is this world comming to