Dissanyake's co-worker had just returned from making a bank run. When he exited his car two men hopped out of an SUV and attempted to rob him of the bank bag he was carrying. Dissanyake realized what was happening and ran outside to help.

"The first guy I saw, I just kicked him in the face," he said. "Then I punched the other guy." The five-time national MMA champion in his native Sri Lanka was still throwing punches and kicks alongside his co-workers when the would-be robbers decided to flee. During the commotion one of them gets left behind after Dissanyake knocks him flat on his face with a left hook. He continued to kick the man and held him until police arrived. 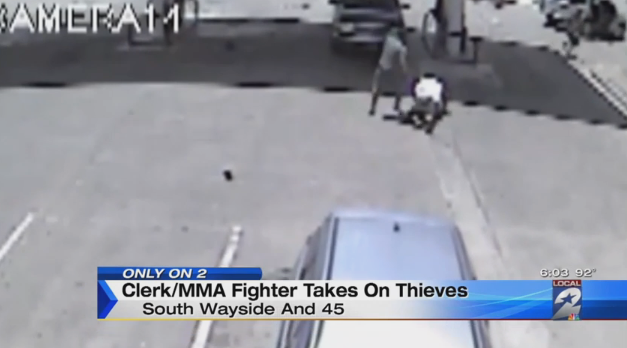 "I just kicked him until he lays down on the floor," Dissanyake told KPRC-TV. "Until he stopped moving cause I wasn't sure if he had a knife or a gun so I wanted him to stop moving."

The thief was charged with robbery with bodily injury. He was identified as 33-year-oldOdell Mathis. The incident happened earlier this month, but police just released the surveillance footage.

We need to see more of this, citizens getting involved.

I very much hate a petty theft h

The best part is, you know he'll be giving up the rest of his so called friends as they abandoned him to take a real ass whoopin.

Comment by Bombahdrop on July 27, 2014 at 8:39pm
Now spread the word, crime is not worth getting chop suey on yo ass. You want something you work for it. Thou shall not steal.