Albert N. Wilson was sentenced to 12 years in prison in Kansas after he was found guilty of raping a minor in the town of Lawrence on September 10, 2016. Wilson, 23, is a former student at the University of Kansas with no prior criminal history. The victim was in the area to visit a cousin who attended the University of Kansas, which is located in Lawrence. She was 17 years old on the night in question, Wilson was 20 years old. The victim lived in the Kansas City area and was a high school student at the time.

The pair met in a bar named the Jayhawk Cafe, more specifically in the downstairs section of the bar known as the Boom Boom Room. Wilson got into the bar thanks to a friend’s ID while the victim was not carded. The pair first met in the queue and later saw each other again inside. The victim, who said in court that she was extremely drunk having been drinking earlier in the night, alleged that Wilson coerced her back to his nearby home and raped her. In January 2019, Wilson was found guilty of rape by a jury of nine women and three men. A second charge of sexual assault resulted in a hung jury. Wilson was sentenced to 12 years on April 3, 2019.

In June 2016, then 22-year-old Brock Turner was sentenced to six months in prison after he was found guilty of raping an unconscious woman in January 2015. Prosecutors in the case had recommended that Turner, a student at Stanford University, serve six years in prison. While probation officials said that Turner should face a “moderate” county jail sentence, the Washington Post reported at the time.

1. Wilson Was Sentenced on the ‘Lowest End of Kansas Sentencing Guidelines for Rape’

On April 3, 2019, the Lawrence Journal-World reported that Douglas County District Judge Sally Pokorny sentenced Wilson to just over 12 years in prison for the crime. In addition, Wilson will be subject to lifetime supervision after his release and he will be forced to register as a sex offender. The Journal-World noted in their report that “Wilson’s sentence is the lowest end of what’s called for by Kansas sentencing guidelines for rape.”

Wilson maintained during the trial that the pair had had consensual relations. Wilson was asked during the trial why he told officers initially that he didn’t remember the night of the incident., Wilson spoke to directly to Prosecutor Amy McGowan saying, “I don’t know how to explain this, but I come from a different background than you, ma’am… I just felt like the police [were] against me at that point.”

Wilson was found guilty after the jury deliberated for six hours. In September 2016, Wilson was a student at the University of Kansas. He was represented in the trial by court-appointed attorney Forrest Lowry. Lowry said prior to sentencing, “It was a chance meeting. Obviously, my client misread what was going on. …If there was ever a case that deserved a departure of any kind, I think this is it.”

Prosecutor Amy McGowan described Wilson’s behavior on the night in question as being “very predatory.” McGowan added what Wilson was accused of doing “violated and changed” the victim. While Judge Pokorny said to Wilson, “You and your family may not agree with the verdict, but the verdict came back as guilty. This offense is a rape.”

2. While in the Bar, Wilson Is Accused of Lifting Up the Victim’s Skirt 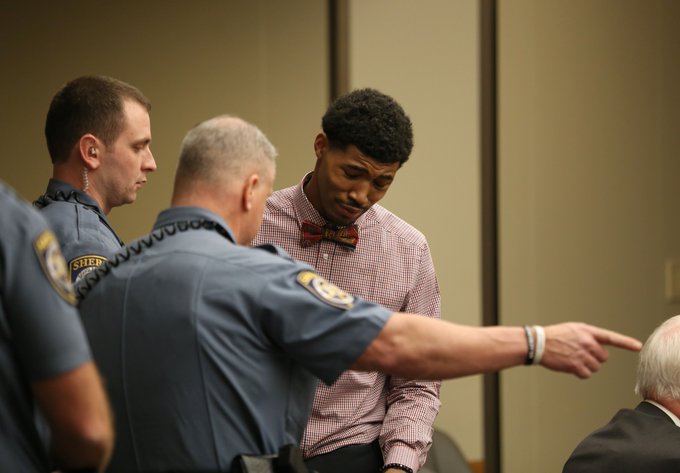 BREAKING: A former KU student has been sentenced to more than 12 years for raping a teen he met at a Lawrence college bar https://ljw.bz/2TTfCFt

Wilson was identified by police as the suspect in the rape after officers tracked down the identity of the real person in the ID that Wilson used to get into the bar.

Imagine this it’s 2009, 13 year-old Albert Wilson is beginning his 7th grade school year with his assigned summer reading To Kill A Mockingbird. As he’s reading, he stops and thanks God as he thinks to himself, “ill never have to face the racism that existed in 1936.”

BREAKING: A former KU student has been sentenced to more than 12 years for raping a teen he met at a Lawrence college bar https://ljw.bz/2TTfCFt

103 people are talking about this

The Journal-World reported on November 9, 2018, that the victim reported the rape on October 5, 2016. That reporting, based on the criminal affidavit, saw the victim say that she had been separated from her cousin by two men. The reporting says that the victim told police that both men touched both her and her cousin “inappropriately.” When speaking to police, the victim’s cousin backed up the victim’s statements about her level of intoxication. The cousin described the victim as speaking in a “very slurred and slow” manner. While another man who was at the bar said that the victim was so drunk, he had to hold her up.

Wilson has admitted the pair had engaged in sex acts, but not penetrative sex. A scientist with the Kansas Bureau of Investigation testified during the trial that Wilson’s DNA in the form of his saliva on the victim’s body. That came from when Wilson kissed the victim. No seminal fluid was found. The swabs used in the analysis were taken from the victim on the day after the rape took place, according to the Lawrence Journal-World’s reporting on January 9. That same reporting said that during Wilson’s testimony he said that he was in his home with the victim for around five minutes. Wilson said the pair were making out on his bed when he got a text message from his friend saying, “Where you at?” In addition to a missed call. Wilson said that he wanted to go back to the bar to see what his friend wanted. Wilson added that when he told the victim this she gave him a “mad look.” Wilson told the jury that he believed the victim made up the story that he raped her because the pair did not have sex.

The victim did not go to the police after she was examined. Police were not notified of the assault until October 2016.

When he was interviewed by police in November 2016, the Journal-Report reported that, Wilson said repeatedly that he did not remember what had happened on the night of September 10. After being indicted on rape charges, Wilson was freed on a $75,000 bond.

3. A GoFundMe Page Set Up for Wilson’s Appeal Has Been Deleted

A GoFundMe account that had been set up to help Wilson’s family to pay for his appeal has been deleted by the crowdfunding organization. At the time it was deleted, the page had raised $2520 of a $50,000 goal. The page says that “Albert faced an all-white jury.” Another section of the blurb reads, “There was no DNA evidence linking him to the crime.” The page also refers to Wilson as an “aspiring journalist and college student.” At the time of his arrest, Wilson was studying to become a sports journalist as an online student with the University of Kansas.

GoFundMe later said that the campaign was in violation of their policies for being “in support of, or for the legal defense of alleged crimes associated with hate, violence, harassment, bullying, discrimination, terrorism or intolerance of any kind.”

The page also notes that the retention fee for an appellate lawyer is between $15,000 and $20,000. The GoFundMe page ends with a quote from Dr. Martin Luther King Jr. that reads, “Injustice anywhere is a threat to justice everywhere. We are caught in an inescapable network of mutuality, tied in a single garment of destiny. Whatever affects one directly, affects all indirectly.” At the time of writing, a Change.org petitionregarding Wilson’s case has received over 13,000 signatures.

4. A Website Dedicated to Wilson Calls Him ‘A Man of Great Character’

A website dedicated to Wilson’s case, named “FreeAlbertWilson.com,” refers to Wilson as growing up “to become a man of great character.” That bio says that Wilson was raised by his mother and older brother. Wilson is also an uncle. The profile adds that “Albert was passionate about making an impact in the world and made it his goal to attend college.” Wilson was adamant about “breaking the cycle may black families face today.”

The Journal-World report from the day that Wilson was sentenced noted that he had many supporters in the courtroom. Wilson’s attorney noted that they would all speak to Wilson’s character. That article mentioned that Wilson played football at Wichita Southeast High School before attaining an associate’s at a local community college and then going on to the University of Kansas.

5. The Victim’s Mother Says Her Daughter Suffered PTSD After the Incident

Lawrence-based psychologist John Spiridigliozzi backed up the victim’s mother’s statements about her daughter’s trauma. Spiridigliozzi said, “She said she was raped … and it destroyed her,” the Journal-World reported on January 9. Wilson’s lawyer said in response to these testimonies that the jurors could only speculate about what caused the victim’s PTSD.

Comment by vaughn mitchell on April 9, 2019 at 3:33pm
She was not carded, the incident happen I. September, but she did not report it to the police until October, wow, no penetration, but kisses, and he get 12 years for rape. Yes it's Kansas. All white jury, he is black, he got F.

Must be some fast ass white girl, what she doing in somewhere they call a boom boom room at 17yrs. old. Now she scared of crowds, emotional problems, man please, no she to damn grown and the mother knows it. 12yrs. Crazy she got to be a white girl !!!!!!! Leave them one's the hell alone, brother's will never learn. I'd be surprised if she not a white girl.