Congress Approved "Negro" on 2010 Census Form (Watch Video) Can you believe this? 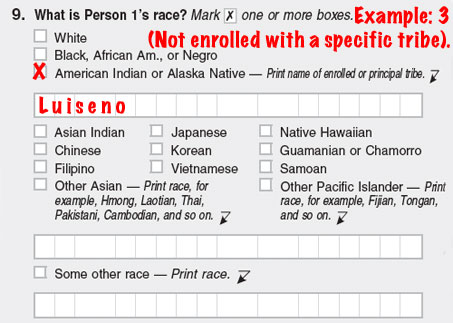 We may have elected an African American as President, but our congress still seems to have race issues.
On the 2010 Census form there is an option under the "Race" category that reads, "Black, African Am., or Negro."

WHAT could be the reason ?? How angry will Obama be?

The excuse offered up by a congressional member is that some of the older African Americans in the country still refer to themselves as "Negro," which I just don't think is true.

Comment by BabyBoy on January 31, 2010 at 3:04pm
Negro in spanish means black, and probanly where the word originated, there is really no difference using black or negro, except in the perceived conotation. If rappers were using it in their lyrics we would probably all be calling each other negro. N***** on the other hand has no legit origin that I know of, yet lots of us use n****/n***** like we might use son or bro, or dude, and thats cause rap mainly has taken the stigma away from the word, to the point even whites wanna be niggas.

Comment by www.jaxsprats.com on January 24, 2010 at 5:42pm
We are all african no matter what region on earth we were born n bred, we are black originally from africa, these labels are meant to keep us seperated and not embrace our true identity....keep the negroes confused is their game

Comment by www.jaxsprats.com on January 24, 2010 at 5:40pm
the negro is originally a spanish/latin word to describe a object not a person

Comment by Jessy on January 14, 2010 at 12:59am
It does not matter to me which box I check, Black, African-American or Negro. I'm proud to be labeled all of the above, hollaaaaaahh.

Comment by Rahmel Mulai El on January 13, 2010 at 3:04pm
"When you study Nationality & Birthrights, one begins to understand that Civilizations Laws come from Nations. And if you are not part of a Nation you don't come under National or International Law. Therefore, you are not recognized by the Nations of the Earth; because Law deals with the interchange between natural people across the planet, always has been that way. And they (Nations) have governmental principles that are universal in their character. They're not unique to us necessarily, they are universal in their character. So when you deal with other Nations, there are certain fundamental principles that are universal that they expect from you, when they communicate with you. And if you don't display a knowledge of them, then you are in violation of Divine Law, (which is where government law is derived), and are outside of the Law or considered what's called an “outlaw”, of which the natural citizens and government can do whatever they want to you and get away with it." —Taj Tarik Bey, G.S. . Moor Info: wwwrvbeypublications.com

Comment by Rahmel Mulai El on January 13, 2010 at 3:01pm
There is so much effort to educate the public and let them know Negro and Black is the same word just different language. There is ONE race (not 3) and it is broken up into Nationalities, you can't know someones National origin by looking at them (assumption). The Human race comes from The Original Asiatic Man & Woman, this is where all Nations are born (Caucasoid and Mongoloid as well). We meaning all Human Beings have a Mother Nation (unless you came from another planet), this is what you identify by (Chinese, Russian, French, Ethiopian,Kenyan, Moroccan, etc..) Anyone OUTSIDE of a National Identity is PROPERTY and/or considered not of the human race (sound familiar) and not CITIZENS. It's not personal or Racial it's the LAW of the Planet (not the"white man's law). you better learn because that time is coming. WAKE UP!!!!

Comment by cj_38baby on January 13, 2010 at 2:02pm
thats just folly black and negro has the same definitions its silly, just want to get the black race hypa due to the fact there is an african american who is the head of state."more power to the black people"