Rapper EVE has opened up about the difficult conversations she’s having with her white husband, Maximillion Cooper, about the protests across the nation over the killing of George Floyd.

During yesterday’s episode of “The Talk,” Eve added her voice to the chorus of Black women who, as of late, have been hitting up social media to whine the challenges they are having trying to explain to their white husbands/boyfriends what the Black community is feeling right now.

“I am in an interracial relationship. I am having some of the most difficult and uncomfortable conversations I think I’ve ever had, and vice-versa with my husband,” she explained, per The YBF. “But, at the same time, it’s a beautiful thing, because…I don’t know his life through his eyes. He doesn’t know my life through my eyes. All he can do is try to understand and try to ask the questions, and he wants to understand…but we have to be okay with being uncomfortable so that we can get to a solution.”

Eva also highlighted the peaceful protests that have been happening.

“There are some people that are having beautiful peaceful protests, with their fists in the air…and all different colors and genders, all together, on one knee, wanting to get past this. That’s what actually keeps me from getting too emotional.” She adds, “We are under rock bottom. The only thing we can do now is to build up.”

Of the four Minneapolis police officers present during Floyd’s arrest and murder, only former cop Derek Chauvin has been charged with third-degree murder and manslaughter.

We previously reported… the results of the private/independent autopsy ordered by the family of George Floyd has been released.

Floyd’s death has been ruled as a “homicide caused by asphyxia due to neck and back compression that led to a lack of blood flow to the brain.”

The Floyd family findings come in the wake of those from the Hennepin County medical examiner whose conclusion was “underlying health conditions” could have contributed to Floyd’s death and that there were “no physical findings that support a diagnosis of traumatic asphyxia or strangulation.”

“What we found is consistent with what people saw. There is no other health issue that could cause or contribute to the death,” Dr. Michael Baden, one of the medical examiners who conducted the independent autopsy, said in a statement.

The first memorial service for George Floyd will be held Thursday at North Central University in Minneapolis, New York Daily News reports.  The Rev. Al Sharpton will give the eulogy at the service

Eve is now a happily married woman after tying the knot with British entrepreneur Maximillion Cooper in Ibiza, Spain on Saturday, June 14.

"I'm so happy to make Eve my wife," Cooper told E! News. "The whole experience has been amazing and we are both so happy to have tied the knot. We met on the 2010 Gumball 3000 rally so it only seemed right to have the wedding at the finish of this years rally in Ibiza, which was the final stop on this years event. We couldn't be happier to celebrate such a special day with all our family and friends." Rapper Eve Steps Out With Maximillion And Future Step Kids

42-year old Cooper founded the Gumball 3000 rally in 1999, sharing his love for racing cars with many celebrities friends who have participated in the 3,000-mile event over the years. 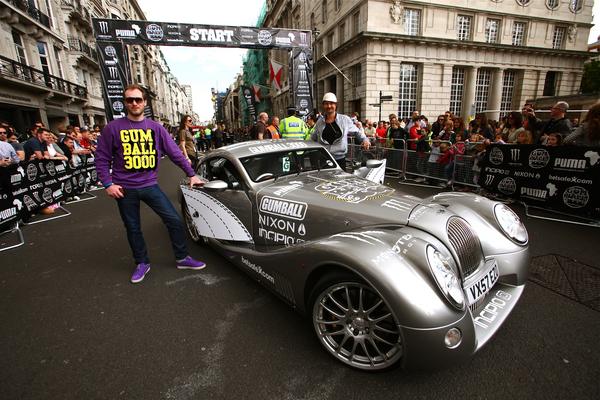 This is the first marriage for 35-year old Eve, real name Eve Jeffers. The "Let Me Blow Ya Mind" rapper began dating Max in 2010. Cooper was previously married and has four children with former business partner Julie Brangstrup. According to E! News, Cooper proposed on Christmas Day. Eve, real name Eve Jeffers, posted an Instagram photo on Monday (December 30) with her brother and mother. In the pic you can see a diamond ring on her finger. The "Let Me Blow Ya Mind" rapper has been dating the billionaire tycoon since 2010. This will be the 35-year old's first marriage. Cooper was previously married to former business partner Julie Brangstrup. They have four children together.

Comment by mr1stroke on June 6, 2020 at 7:19pm
Lol all those niggers are married white ate date whites know they can't talk about race, they never did before it was never important, why now you are there for the money and to feel special, damn insecure niggers i dont care if you live or die once you go white you are dead to me, i hate insecure niggers and racist white people, same thing all they know is destroy and hate

Comment by caribbeanrose on June 22, 2014 at 5:42pm
Congrats, I wish both of them a happy future together

f--- the negative comments, happiness for ever Coopers! enjoy life for what yall have as one couple now.!

Comment by Chimoi Taylor on June 16, 2014 at 10:53pm
YESSSSS ^_^ Congratulations Eve you go gurl ^_^ GOD BLESS you both. Wishing you many happiness, success, love, commitment, and longevity throughout your marriage. Congratulations to you both.

You gotta love the man that loves you back ladies... take it for what it's worth.

@tiffany anderson i hear that lol