Clinton’s Latest Lies Threaten Her Candidacy: Are the Elite Moving Away From Clinton? As the saying goes, if Clinton lips are moving, they are lying. They are America’s Bonnie and Clyde.

The Ultimate Lie: The Clinton Foundation In her latest round of lies which falls right into line with Benghazi, selling uranium to the Russians through the Clinton Foundation’s front company, Uranium one, and of course, the email scandal, Clinton is now lying about the mixing of Clinton Foundation activities with her duties as Secretary of State. This is a major revelation that reveals a criminal conflict of interest.

Even the Daily Mail has entered into this controversy when they said “Hillary is simply using Huma and Mills to run her scams for her.”  In other words, even the press is reporting that Hillary has outsourced her conflicts of interest and criminality to her staffers. Of course, should we expect anything different from the greatest liar in American history?

The significance and importance of this revelation cannot be overstated. Does this apparent betrayal by her former employees represent a coming shift away Clinton by the criminal elite? If I were a betting man, I would be of the opinion that criminal elite have already written Clinton off as their representative in the White House, even when the media has not yet written her off. The canary in the mine moment will come when we see cracks, by the MSM, which suggests that they are less than supportive of Clinton’s candidacy.

Why the shift? Why would the criminal elite be preparing to move in another direction away from Hillary? The answer is simple and requires little speculation. Simply put, Clinton cannot win this election. Her criminality is front and canter for all to see. And Clinton is in such a state of physical and cognitive decline, she cannot even carry out her duties as a presidential candidate. She goes days between public appearances. And when she has been appearing in public, her appearances are controlled and very, very brief.

Here is Hillary in public on August 25th in which she is dismissive of the nearby reporters, thus missing an opportunity to make several points in her behalf.

Remember, all political candidates want face time on the TV cameras. Clinton is avoiding this like the plague. Why? IS her political campaign going to fade into oblivion and become the first campaign to be conducted by stealth an their media proxies?

In Another Lie, Hillary Proclaims She Is In Good Health

There are numerous pictures and videos portraying Hillary’s physical and massive cognitive decline. It is one thing when the body starts to decline. However, it is quite another when physical decline is accompanied by overt cognitive decay and an inability think coherently as evidenced by pronounced difficulty expressing coherent verbal content. Who will ever forget the following recent moment on the campaign trail?

This represents cognitive confusion of the highest order. It is akin to what happens when a dementia patient wanders away from a care facility and becomes “lost”. Hillary Clinton is quickly becoming “lost”.

If the public truly wanted to know about Hillary’s health, we would be demanding the MRI’s of her hypothalamus, often an indicator of good mental and physical health in the elderly With her pronounced state of cognitive confusion, I guarantee she has had multiple MRI’s on that region of the brain. Since she is running for the most important office in the land, the American people should be demanding to see her MRI’s of her hypothalamus. I can guarantee that this revelation will not be forthcoming, or they will use fake MRI’s of another’s brain.

Can Clinton Make It To November?

How can the powers that be keep her on her feet to November.  The rate of decline since the height of the Democratic Primary, since early April, is stunning. I had a neurosurgeon tell me, off the record, that he does not think she will be alive in a year based on the progressive set of photos and videos he has seen.  Yet, Clinton and her handlers keep doing what they do best, they continue to lie. Clinton is a person in serious trouble from a health perspective. Below we see another picture portraying Hillary’s near and ominous demise. 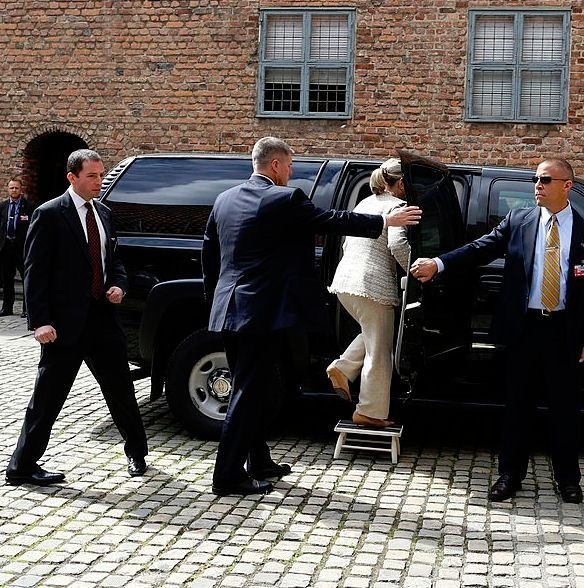 A Message to All Democrats

Even for democrats that will support Clinton despite her very public criminal activities, how can this amoral block of democratic supporters continue to fall in line behind a woman that cannot even walk a straight line? Please Mr. and Mrs Democrat, tell me how supporting Clinton, at this point, helps the country?

Don’t look for any admissions of the truth from the MSM or the Clinton camp as they will continue to do what they do best, lie!

One final point, if the criminal elite are moving away from Clinton, what do you think there Plan B consists of? Please leave your answer in the comment section.