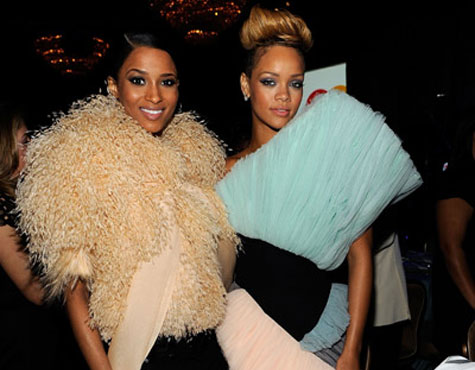 The divas duked it out on Friday night as Ciara and Rihanna got into a feisty Twitter exchange that had the Internet buzzing.

CiCi appeared as a guest judge on E!’s “Fashion Police” earlier in the evening. When a photo of Rihanna at the BRIT Awards was shown on screen, she commented, “I ran into her recently at a party and she wasn’t the nicest and it’s crazy because I’ve always loved and respected what she’s done with fashion. I’ve ran into her before, but this time it wasn’t the most pleasant run-in.”

Host Joan Rivers chimed in by saying, “A b****!” before Ciara told her with a laugh, “You crazy.”

Rihanna was tuned in to the television because she responded on Twitter shortly after the episode aired. “My bad ci, did I 4get to tip u? #howrudeofme,” she wrote before Ciara shot back, “Trust me Rhianna u dont want to see me on or off the stage.”

“U gangsta huh? Haaa,” laughed the “S&M” singer. “Good luck with bookin that stage u speak of.”

But the ladies settled their differences soon after. “Ciara baby, I love u girl! U hurt my feelings real bad on TV! I’m heartbroken! That’s y I retaliated this way! So sorry! #letsmakeup,” said RiRi.

Ciara agreed to put it behind them, telling her peer, “Rhi u know its always been love since day 1! Doing shows/everything. you threw me off in that party! Apology accepted. Let’s chat in person.” Comment by sunshine on February 27, 2011 at 1:47pm
I guess Rihanna did not want her ass whooped.  See how much mouth she's got.  I am sure she had that much when her and Chris Brown got into that brawl. It is just that she came out the looser.

Comment by Bombahdrop on February 27, 2011 at 11:48am
@LSD I ain't gona lie i saw them hideous dresses and went straight to comment i am going to read the so call garbage the pr firm wrote on the two celeb"s behalf lol

They didn't twitter a damn thing, just a marketing ploy tweeted by their PR firm 2 get fans jigged up 2 create more awareness4 their cause...RECORD SALES & PROFIT!!!

Sincr record sales R in the toilet, any publicity is good publicity, even if its some wanna b "Tweet- Beef"!! Comment by Bombahdrop on February 27, 2011 at 3:50am
what the f*** are they wearing lol rhianna looks like she is being swallowed up in that dress.lmfao those outfits are hideous.

Comment by keisha on February 27, 2011 at 3:07am
That would be a nice fight !
Okay for real these two rich birds need to sit down somewhere, I tell you boredom is a b****

Comment by deborah rollerson on February 27, 2011 at 1:03am
Dahved I want to see Machel at MSG. I want Machel tickets

Comment by Noble Empress Kazz Haneef El Bey on February 26, 2011 at 11:36pm
how old are the people who tweeted this ish? 11? 12? i feel like i'm reading some notes being passed in elementary school. they need to grow up. when i saw this post in email, i thought that something really had happened. this is some childish ish. a waste of time even reading. who would even want to follow this type of stuff.

Comment by David Shamach on February 26, 2011 at 11:33pm
2/26/10 If they had real men in thair lives they wouldn't have time to cat fight with each other, Negro women know how to make up it's these so-called thugs that need to show love towards one another.