Chris Stokes, the former manager of B2K, has been accused of sexual abuse by band member Raz B and his brother, Ricardo Thornton.

Chris Stokes, the former manager of B2K, has been accused of sexual abuse by band member Raz B and his brother, Ricardo Thornton. On March 13, B2K member Raz B caused a stir when he posted on social media saying that he would be leaving B2K’s reunion tour.

In December 2018, it was announced that B2K was going on a reunion tour in 2019 titled, The Millenium Tour. The group, which features, Raz B, Omarion, Boog and Fizz, were all signed on to return. The tour began on March 8 and was set to wrap on April 28.

Stokes said on his official website that it was his “ingenuity” that was behind B2K’s success.

Raz said in the video, via the Shade Room, “Raz B is officially off the tour. I don’t feel safe because I feel like Chris Stokes is around. So guess what? I’m off the tour. Good luck to everybody. No disrespect to [Omarion] because he’s my brother. [Omarion] if you want to come talk to me and you want me to do the tour, I’ll do the tour, but I’m officially off the tour. Oh, guess what? I guess we’re about to shoot the new ‘Surviving Chris Stokes’ movie, right? So call Lifetime ’cause I’m ready to talk.”

2. Raz B Has Been Accusing Chris Stokes of Sexual Molestation Since 2007

In 2007, Raz B said that Stokes, 53, had started molesting him before the BTK founder was 13 years old. At the same time, Raz alleged that Stokes had molested the other members of the group. Raz’s brother, Ricardo Thornton, alleged that Stokes made him take showers with other boys but that he was able to avoid Stokes. Despite this, Thornton said, “I kinda knew what was going on over there, and yet I took my brother over to Chris. I didn’t protect him like I should have. [Stokes] molested my brother and he molested me.” In addition, Raz accused Stokes of mismanaging the group’s finances.

Back then, Omarion, released a statement saying that Raz and his brother were “lying” about Stokes. Omarion then referred to Stokes as a “father figure.” Omarion did state that his aunt was married to Stokes. Stokes also commented at the time, saying, “All the allegations they made are false,” said Stokes. “I’m not gay. And I’m married. And I have four kids. I have been with my wife for 16 years. And I’m not a child molester. So those are all false allegations. I’m gonna sue them. And I owe that to my wife and kids, period. It’s ridiculous.” Shortly after those statements were released, TMZ reportedthat Raz B and Stokes had been seen out in public together.

Stokes and his wife, Omarion’s aunt, Monyee pictured in September 2006.

On his official website, Stokes says that he discovered Brandy, B2K as well as “Glee” star Kevin McHale. Stokes, a native of Los Angeles, says that he has been involved in the music business since he was 17 years old. He says that his connection to the entertainment business began with his mother, actress and comedian, Irene “Mama Stokes.” Since 2014, Stokes has been more focused on movies and TV rather than music following his signing with the William Morris Endeavor Agency. 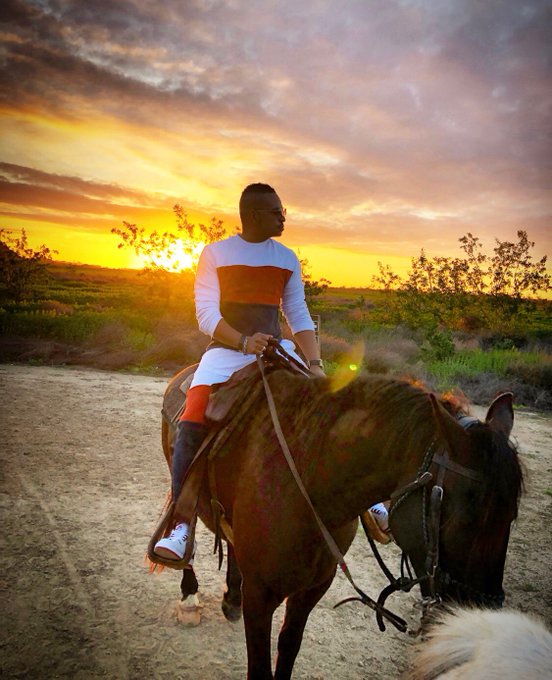 17 people are talking about this

Stokes writes on his Twitter bio, “Jehovah gets the glory! #2019 Year of the winners! Jehovah leads my life. This year will be my best year! Jehovah 1st and business 2nd. Don’t let the enemy in!”

In 2012, Stokes produced the 2012 dance movie, “Battlefield America.” TMZ reportedin June 2013 that the movie had been such a flop that one of the investors was suing Stokes for $10,000. The article says that the movie cost $15 million to make but only pulled in $172,000. The investor told TMZ, “I simply want Christopher Stokes and team to make things right and pay what they owe me.” While Stokes was quoted as saying that his name had been dismissed from the lawsuit.

On his official website, Stokes refers to “Battlefield America” as a “hit kids dance battle film.”

5. Raz B Appears to Now Be Saying That He Will Be Staying on the B2K Tour

On the morning of March 13, Raz posted a statement to his Instagram page saying that, “I am a work in progress. I appreciate the outpouring of love, empathy, and understanding from my supporters. I look forward to continuing the millennium tour for our fans. You all deserve it!”

We’ve been hearing this accusation for years when will they prosecute this pos! Can’t let none ov’em get away. I hate them with perfect hatred. God forgive me.

Predators in the mist!