*Hours after performing at the BET Awards, Chris Brown was caught on camera stumbling out of a nightclub, with three people in his circle attempting to hold him upright.

The singer, who was released from jail earlier this month, was partying at LA’s Playhouse nightclub after the ceremony and was caught by paps while leaving the venue in the early hours of Monday morning.

In footage posted by TMZ, Brown is shown emerging from the venue being supported by two friends, who help carry the singer out before another associate goes to help. Brown is seen clutching the third man’s arm as he stumbles towards a car driven by his girlfriend Karrueche Tran. [Watch below.]

Brown served two months in jail after he admitted breaking the terms of his probation relating to his 2009 assault on then-girlfriend Rihanna. 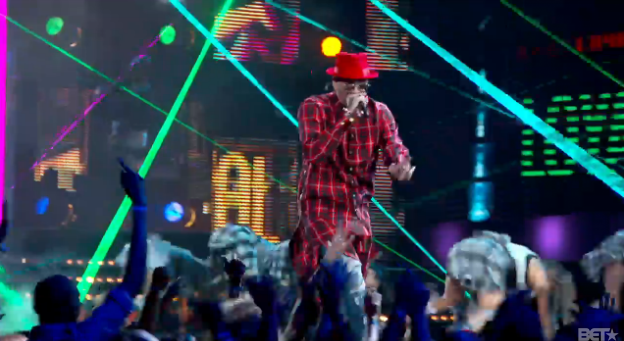 Chris Brown made a triumphant return to the stage Sunday, June 29, at the 2014 BET Awards. Joined by special guests Lil Wayne, Tyga and Travis Barker, the singer thrilled the crowd in attendance by performing "Loyal." Comment by ivan de jesus on July 3, 2014 at 5:20am
everybody should shut up let him live his own life people need to mind their business

Comment by Dolly Palmer on July 1, 2014 at 9:38pm
Sounds like he trying to party like his system didn't detox while he was imprisoned... Some of us know all too well how your system can reset.. What you could tolerate once before can become the tipping point for bring over the edge.. I'm just glad he had people around him to support unlike our Transformers actor..

Hey is all about you today the 2014 BET awards this sunday night off the shing I really enjoy the show like I sad the enterment maked my day love you all glad you really enjoy your self have a safe July 04,

the boy is good he just need strong people around

Comment by selene on July 1, 2014 at 12:15pm
Breezy was twisted!!! This is what happens when you haven't had alcohol in your system for months then you go take that one drink and it be having you floating!!!! Lmao