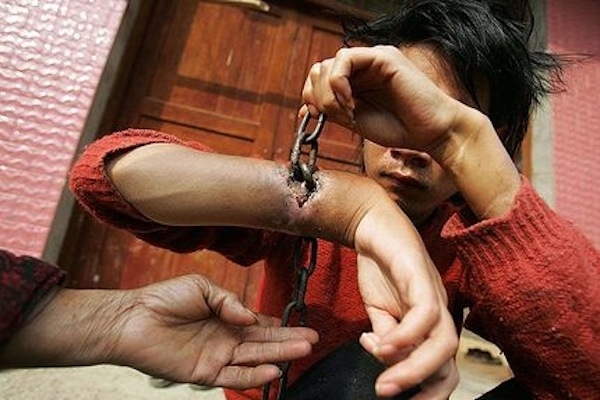 Zhang Chuanqiu, a 27-year-old Chinese man, is hoping to save his hands after he was shackled so tightly in an illegal prison in Hunan that his flesh grew over the chains, the Austrian Times is reporting. According to the paper, Chuanqiu says he is in terrible pain due to the wounds:

"They cause me a lot of pain. They are always inflamed and ooze pus all the time. But we have no money so I have to rely on charity or the good heart of a hospital or doctor to save my hands." Chuanqiu was imprisoned after a falling out over a loan he was using to build his house. He was chained in a cowshed in 2005, says BuzzFeed. He needs a surgery that will cost about $1,600 to remove the chains and to avoid further infection.

“The only person who did not give up on me was my mother who waited for her time and rescued me,” he explained.

Comment by conde on November 16, 2010 at 11:12am
wow this is crazy is there any way to contrubut to help this person for the medical

Comment by chevon on November 14, 2010 at 4:18pm
I sorry for this guy and i hope he gets the help he needs quickly before he loses his hand. THIS KIND OF TREATMENT IS NEED ON WALL STREET AND IN CONGRESS FOR THOSE THEIVES THAT SANK THE ECONOMY AND DESTROY THE COUNTRY.

Comment by Starasia Chin on November 14, 2010 at 12:13pm
That is terrible, maybe they need to do this to all the Corporate theives that have been spending workerse pensions, 401k's and closing up their businesses to go overseas and the laying off of so many families!

Comment by TASHA on November 14, 2010 at 12:27am
not like he murdered somebody the man just didnt pay back the loan what a shame

Comment by JamRockLady on November 13, 2010 at 11:21pm
@Shamir Akida...many blessings to you for your words of enlightenment. Thanks for "keeping it real". The black community (aka. descendants of Africans) need a "wake up call / reality check" from time to time.

Comment by Shamir Akida on November 13, 2010 at 10:21pm
That is sad, but you to know something that is even more terrible, (AFRIKANS) they put us in chains like dogs to bind our hands and feet along with metal face mouth chamber devices so that we dont communicate with each other (TALK THE TRUTH).....and we were in these Babylonian devices ALL DAY AND ALL NIGHT.......FOR OVER 500 YEARS..........Imagine your mother, father, sister, brother, Grand mother and father (IF YOU SAW YOUR RELATIVES AT ALL) dem born and dead inna the devices babylon mek. Sorry fi di yellow man still, but us AFRIKANS are still living in these conditions, only more sophisticated....... DONT MEK THE ANCIENT ELDERS FORWARD OUTTA MI.