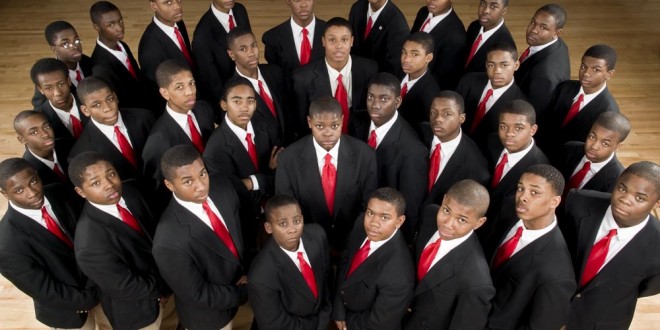 For five consecutive years, all of the graduates of Chicago’s Urban Prep Academy have been accepted at four-year colleges and universities.

The charter school has garnered national recognition for providing minority students with the academic skills necessary to be “college bound.” Last spring, 240 students had college acceptance letters in their hands before receiving their diploma. An accomplishment that Mayor Rahm Emanuel considers to be phenomenal. The Chicago mayor delivered a moving speech at the 2014 graduation, congratulating the students for their hard work and achievements.

As part of an Urban Prep ritual, when the high school seniors are accepted into college, they exchange their red tie with a red and gold tie.
“The tie represents to me moving on from a boy to becoming a young man and actually doing something with my life,” graduating senior Dumar Harris said.

While people all over the country are inspired and impressed with the accomplishments of the students at Urban Prep Academy, there are some who criticize the school, noting that there are many students that have come to the school, but do not graduate due to transferring and dropping out. But school administrators at Urban Prep Academy feel that fact should not diminish the accomplishments of the students that actually do graduate.

“Urban Prep is not for everyone, and those students may leave us,” school founder and CEO Tim King said. “But the fact that some students choose to leave us should not be used as a weapon against the students who have chosen to stay and have achieved this incredible accomplishment.”

And not only are those who choose to stay at the successful school rewarded for their hard work with at least one acceptance letter from a college, but many graduating seniors at Urban Prep have been accepted into multiple colleges and prestigious universities.

“I got into a lot of different schools, but right now, I’m thinking about four different choices,” student Keshawn Cathery said.

Derrick Little said, “I got into Georgetown University, which I will be attending in the fall.”
Orlando Magic star Dwyane Wade was so impressed with the news of the school’s continued success that he donated $10,000 to offset the cost of the prom for the 2014 graduating class.

We’ll all be waiting to learn if the Urban Prep Academy will make history again this year. Good luck to the graduating class of 2015!

It will not make your local mainstream news,since this image is not apart of the programmed script used to propagate our people in a bad light.

In most inner cities,there are more good than bad,but only the bad are televise across the nation.  Thank the Ancestors I am around a different type of folks,so I get to read the good news daily in my newsfeed!

You're only going to hear about this in our news outlets and us passing it on to the people it hasn't reached, we can't rely on  other outlets to give us news of encouragement.

Comment by Big Shot... on October 12, 2015 at 1:49am
Now why cant we hear any of this on the main stream news??? This is huge, this also can be used as a blue print accross the nation. Theyre doing something right. This is in Chicago! All we hear is how many got shot or killed every weekend, never this. New York could surely take some pointers from them.

Comment by Big Woman on October 11, 2015 at 10:03pm
Yaaay, this is wonderful news. God bless these kids in realizing their goals and the school for a stellar job.