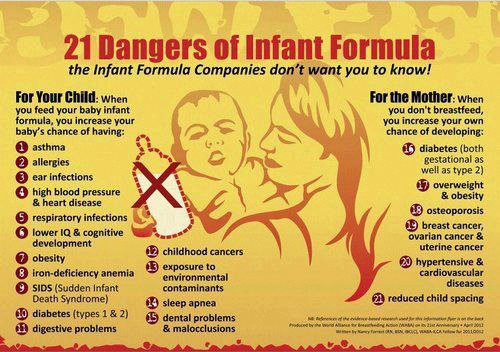 (GreenMedInfo.com) It is time to shed some long overdue light on serious and avoidable chemical exposures facing the majority of infants today.

Due to the fact that only 11% of newborns in the US are exclusively breast milk during their first six months of life, it is safe to say that most newborns today are exposed to the ingredients found in infant formula.

Owing to the fact that infant formula is being used during the first year of life, which is the most critical developmental period of the human life cycle (outside embryogenesis itself), it behooves us to make sure that what we are feeding them is truly nourishing, and at the very least, not harming them. Correct?

So, what exactly is being put into the infant formulas millions believe is the closest facsimile to human breast milk available?

We will take a more forgiving approach, and avoid the more obviously lower quality mass market infant formula brands, which use genetically modified products and high fructose corn syrup, to name but a few obvious red flags.  Instead, let’s look to a so-called “organic” product, like Earth’s Best Organic Infant Formula, as the assumption here is that it is “Earthy,” “Organic,” and as the label proudly displays: “Produced Without the Use of Potentially Harmful Pesticides.”  Did you get that, by the way? “Potentially Harmful Pesticides,” because you know that some pesticides are notactually harmful to infants, right? This strange qualification will take on a clearer, far more chilling meaning in just a moment… 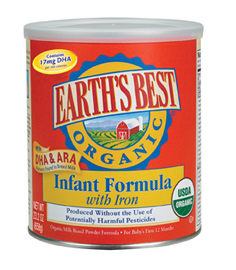 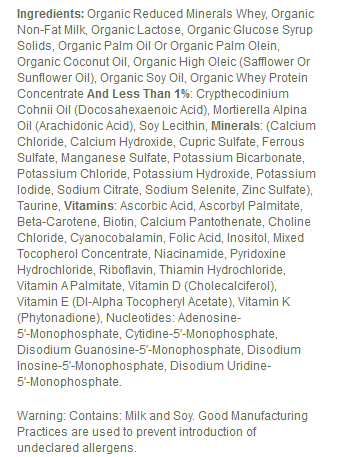 Well, let’s begin our inspection with the “Mineral” ingredients.

Ok, so, we are only on the third mineral ingredient in “Earth’s Best Organic Infant Formula” and we have found the product contains an ingredient — Cupric Sulfate — that directly contradicts the product’s name and label claims. That is, unless we assume that since uranium and cyanide are chemicals “naturally” found on the Earth, it is OK to call Calcium Chloride, Calcium Hydroxide and Cupric Sulfate “natural,” “Earthy” ingredients, as well.  Unfortunately, however, given that Cupric Sulfate IS commonly used as a pesticide/herbicide, it would be untrue to say the product is “Produced Without the Use of Potentially Harmful Pesticides.” This is, from the perspective of consumer advocacy and truth-in-labeling, highly misleading. We have an entire article titled “Why Is Pesticide Used As An Ingredient In Infant Formula?” on the topic of Cupric Sulfate and formula, if you need a more in-depth analysis on the subject.

So, let’s continue on and see what else the product label has in store for us….

Are you getting the gist yet? See anything Earthy here, other than in the most technical sense of the word as a chemical extracted from the earth?

How about “Organic”?  Do these “Corrosive,” “Irritant” and “Harmful” ingredients sound like something you would be willing to feed an infant, at any dose? It gets worse.

If we skip forward to Sodium Selenite, we find it is: “Very toxic” and “Dangerous for the environment,” according to the EU Index.  In fact, the Material Safety Data Sheet for sodium selenite indicates it has the same toxicity as sodium cyanide at just 7 mg/kg in the rat. At this level of toxicity it would only take 47.5 milligrams to kill a 15 lb infant.  More information in our blogs explain just how toxic sodium selenite and selenate really are.

It is an established fact of history that the US FDA approved selenium in the form of selenite and selenate in the early 1970’s, first for use in animal feed and then soon after for human consumption, before their toxicity was fully appreciated. As discussed in one paper:

It is has also been acknowledged that sodium selenite and selenate should no longer be used in infant formula for the following reason:

“Infant formulas, protein mixes and weight loss products still use almost exclusively sodium selenite or sodium selenate. The continuing use of the inorganic selenium compounds is difficult to justify. This is especially true for infant formulas, which through the use of the inorganic selenium salts deprive the growing infant of the benefits which only selenomethionine can provide. Studies with preterm infants [24,25] have already demonstrated that selenium yeast is safe and effective for enteral selenium supplementation. Selenium yeast and selenomethionine were furthermore shown to be superior to selenite in studies with nursing mothers; specifically, more selenium appeared in the milk of mothers obtaining selenium from selenomethionine than from selenite [26].”3

Of course, the problem here is not simply a matter of one form of selenium being “more nutritious” than another, rather, of one being inherently toxic — at any dose — versus one (selenomethione) having very little, if any intrinsic toxicity when used in reasonable dosages.

Finally, let’s not neglect the last mineral on the list of ingredients: Zinc Sulfate. It is also classified by the EU index as “Harmful” and “Dangerous for the environment.” [Material Safety Data Sheet]

One final comment on the list of ingredients in the product. It contains dl-alpha tocopherol, which is a petrochemically synthesized blend of 8 molecules that resemble those within the natural vitamin E family of tocopherols and tocotrienols. Not only does it have lower antioxidant properties, but it can be argued that it is an endocrine disruptive blend of molecules, that has no place in human nutrition, and certainly not in any infant formula labeled “Natural” and “Organic.”

Now that we have revealed what you might call the “organic-washing” of infant formula, with its inherently inappropriate blend of industrial, inorganic minerals/chemicals billed as “nutritious minerals,” it is important to point out that Earth’s Best, despite its “crunchy” Earth-loving name, is owned by Hain Celestrial Group, which is itself owned by the Heinz Corporation. To view the history of acquisition, go to the Earth’s Best “Our History” page.

This article is not intended to point fingers at a huge corporation for intentionally harming the health of infants. Rather, it is a call to awareness and action regarding outdated “best practices” when it comes to product formulation. The science is clear. The toxicity of these ingredients has already been demonstrated by respected organizations. Infants are all too often looked at as “miniature adults” from the perspective of toxicological risk assessments, rather than what they are: disproportionately (if not exponentially) more susceptible to the adverse effects of environmental exposures.  We must demand the reformulation of products that are putting their health at risk, or at the least, refuse to purchase and use them any longer if the companies who produce and market them refuse to reform themselves.