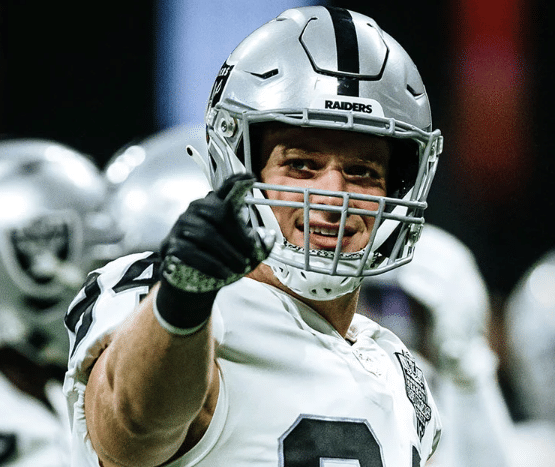 “What’s up people?” Nassib posted. “I’m at my house here in West Chester, Pennsylvania. I just want to take a quick moment to say that I’m gay. I’ve been meaning to do this for a while now, but I finally feel comfortable enough to get it off my chest. I really have the best life, I’ve got the best family, friends and job a guy could ask for.”

Check out his video message below.

“I’m a pretty private person so I hope you guys know that I’m really not doing this for attention. I just think that representation and visibility are so important,” Nassib added. “I actually hope that like one day, videos like this and the whole coming-out process are just not necessary. But until then, I’m going to do my best and do my part to cultivate a culture that’s accepting, that’s compassionate and I’m going to start by donating $100,000 to the Trevor Project.”

The Trevor Project provides prevention services for suicidal members of the LGBTQP+ community. Nassib said “They’re an incredible organization, they’re the No. 1 suicide-prevention service for LGBTQ youth in America. And they’re truly doing incredible things. And I’m very excited to be a part of it, help in any way that I can and I’m really pumped to see what the future holds.”

As reported by ESPN, NFL commissioner Roger Goodell said the league “is proud of Carl for courageously sharing his truth today.”

“Representation matters,” Goodell said in a statement. “We share his hope that someday soon statements like his will no longer be newsworthy as we march toward full equality for the LGBTQ+ community. We wish Carl the best of luck this coming season.”

Raiders owner Mark Davis told ESPN: “It’s 2021. All the more power to Carl. It doesn’t change my opinion of him as a person or as a Raider.” Coach Jon Gruden added via text message to ESPN: “I learned a long time ago what makes a man different is what makes him great.”

GLAAD President and CEO Sarah Kate Ellis said “Carl Nassib’s story will not only have a profound impact on the future of LGBTQ visibility and acceptance in sports, but sends a strong message to so many LGBTQ people, especially youth, that they too can one day grow up to be and succeed as a professional athlete like him.”

Yeah I remember that guy vaughn. Wow.....didn't know that happened to him.

Comment by BIIGMANN on June 25, 2021 at 8:21pm
If it was OK to be gay, why do you have to make an announcement about it? There is something wrong with being gay. D U H!

Tyrone lol you make valid points, but that society dont care about every thing you said, they are making gay cartoons for kids, they even trying to change the bible, do you actually think they care about poverty unless you are part of their community?  This is sad but thats the new world, the rest of us have to keep our moral so we dont burn, because its coming, i feel it i just dont know which way to run so i stay away from that life style and society

This is what news has become.  Announcing being gay is now news worthy.  Forget about the children living in poverty, or the man that can't pay his bills because of the pandemic and families are now living day to day not knowing where their next meal is coming from.  And if you call it out as moral offense you're an outcast and cut off.  This is what they're grooming children for.  It used to be don't ask, don't tell, but now this lifestyle is celebrated.  I wonder what would happen if someone made an announcement they were heterosexual.

My issue is, why it has to be an Announcement, you make the choice to be with men, why cant you just own it? You have been living in lies fooling every one you know including your fans now you sound like youre doing them a favor, you are a f***** and have been a f***** good for you, what do you want for that announcement, will they like me more if i announce that i have been saving the less fortunate out of poverty? F***** ass

homosexuality is of satan

Comment by vaughn mitchell on June 22, 2021 at 8:16pm
He think he is slick coming out after he sign that big contract, I doubt he plays for the Raiders after this season. They can't until he get hurt to drop his contract. see how the dumb black player Michael Sam, who came out in the draft years ago did not get drafted because his dumb ass kissed that white dude on national tv, made a fool out himself. The difference this white dude kept his mouth shut, and waited until he got paid then came out, if he get hurt he still get a couple of millions. LGBT community going to start buying his jersey. Damn raiders gay jokes going to be all over the internet. I can see all his teammates waiting until he shower before they get in. Lol