Caribbean and Latin America has world’s highest homicide rates – Can you believe that? 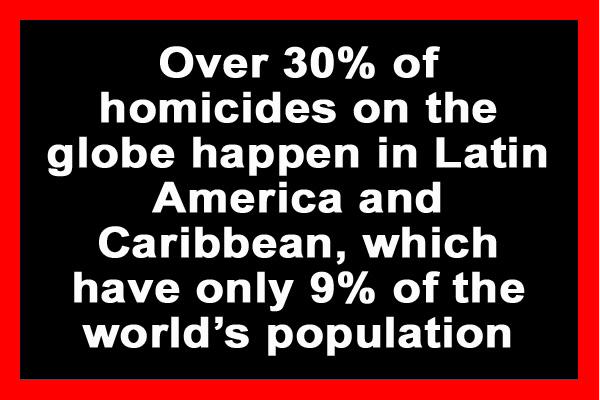 A new report on interpersonal violence around the world shows that low- and middle-income countries in Latin America and the Caribbean have the highest homicide rates of any developing region, as well as the highest proportion of homicides committed with firearms.

The Global Status Report on Violence Prevention 2014, released this week in Geneva, was published jointly by the World Health Organisation (WHO), the United Nations Development Programme, and the UN Office on Drugs and Crime.

Among other findings, the report estimates that 165,617 deaths in developing countries of Latin America and the Caribbean were due to homicide, and three-quarters of these were carried out with firearms (data for 2012). This translates into 28.5 homicides per 100,000 population, more than four times the global homicide rate (6.7 per 100,000) and more than twice the rate of developing countries in Africa, which have the world's second-highest regional homicide rate (10.9 per 100,000).

"As a group, developing countries in the Americas share the dubious distinction of having the highest rate of lethal interpersonal violence in the world," said Dr Marcelo Korc, advisor on sustainable development and human security at the Pan American Health Organisation/World Health Organisation (PAHO/WHO). "Many of our member countries are taking steps to address this violence, but it remains a huge challenge to implement effective prevention and treatment programmes to lower these rates and reduce the tremendous suffering they represent."

Among other findings about the Region of the Americas, the new report shows:

Firearms were also predominantly used in intimate partner homicides in the Americas.

Both globally and in the Americas, 30 per cent of women reported having experienced physical or sexual violence, or both, at some point in their lives.

All countries in the Americas have laws regulating firearms. However, less than two-thirds have special firearms control programmes such as gun buy-backs or firearms collection and destruction programmes.

To reduce levels of violence, the report recommends 18 "best buy" programmes, including:

* programmes to reduce the availability and harmful use of alcohol;

* school-based programmes to teach children and adolescents "life-skills" such as non-violent conflict resolution;

* efforts to change gender norms that are supportive of violence against women;

* programmes to improve parenting in families at risk of violence; and

"One of the conclusions that can be drawn from this report is that we continue to need more and better data on interpersonal violence, and this is true of the Americas as well as other regions," said Korc. "It is critical to know the dimensions and specific characteristics of interpersonal violence to better inform policymaking and the design of effective plans and programs. To really work, plans have to be based on good data.

PAHO, founded in 1902, is the oldest international public health organization in the world. It works with its member countries to improve the health and the quality of life of the people of the Americas. It serves as the Regional Office for the Americas of WHO and is part of the Inter-American system.

I am not sure of the accuracy of the report but Trinidad and Jamaica isn't surprising on the record.