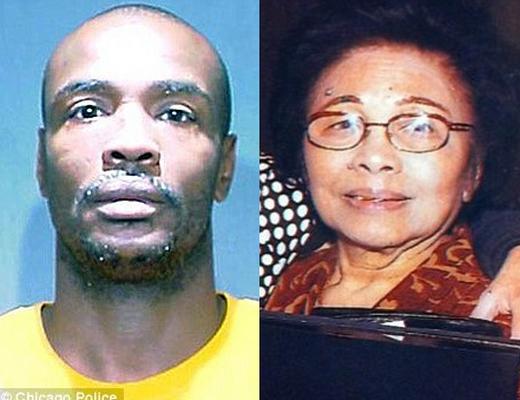 Raymond Harris is a career criminal who has been in and out of prison for most of his adult life. The 36-year old thug saved his most brutal crime for last.

Chicago police say Harris beat and robbed 73-year old Virginia Perillo last month in the garage of her home, leaving her bleeding and brain dead. Harris then took two wedding rings stolen from Perillo and proposed to his girlfriend.

Perillo died from injuries suffered in the beating, but police were able to tie Harris to the crime because he left his watch behind. His DNA was matched using the police department's criminal database.

Harris was just released from prison in May 2011 after serving 13 years of a 30-year sentence for attempted murder and aggravated arson. While committing that 1997 crime prosecutors say he broke into the home of a woman, beating and raping her repeatedly over several hours. He then slit the victim's throat, knocked her unconscious and set her house on fire. The woman suffered third-degree burns but survived. Harris had only been out of jail for a few weeks on an armed robbery conviction when he committed that crime.

He was arrested Tuesday and charged with first-degree murder and armed robbery in Perillo's death.

“It has been a stressful and busy time for us knowing that the person that murdered my mom was still out there," Perillo's family said in a statement via NBC Chicago. "We’re just relieved knowing that there is one less criminal on the street.  We can begin the healing process and put some closure to this and hopefully find the answers as to why.”

Harris is due back in court November 29 for a status hearing.

THIS SON OF A B***H SHOULD HAVE NOT BEEN ON THE STREET IN THE FIRST PLACE..LOOK WHAT HE DID TO THE FIRST WOMEN. I BLAME THE LOVELY JUSTICE SYSTEM AND WHOMEVER GAVE HIM EARLY RELEASE AFTER SUCH A BAD CRIME I HOPE THEIR CONSCIENCE KILL THEM.I HOPE HIS A** GET A BEATEN IN JAIL AND SUFFER LIKE THIS LADY DID...

How tha hell do you kill a woman and immediately try to marry a woman, That s*** is not love, He killed a woman how could you love any woman after that. This sucka is Twisted.

Sick Bastard!!!!!!! Hope he rot in hell and the electric chair.

That could have been my own grandmother!  Sick bastard like that should have never been let out!

I guess you have to be a cop, for the perp to get the chair. SMDH I wonder if this scumbagg realizes that he has No Love in his heart for noone, How does one figure they have Love in their heart for someone and kill someone to prove their Love to someone else HOW! He took the ladys wedding rings and engagement rings after killing her and then go try to propose and prove his undying Love to some female. I wonder whos the stupid chick that had this man hard up to marry her ass. She bess to thank God that the marriage didn't go down cause she could have been the one or the next one murdered if she ever tried to leave his ass. The Devil is real and he is very busy working on people to take thier souls to hell to be tourmented for eternity meaning a torment that never ends. People really need to look to God in times of temptations and also confess their sins and ask for forgiveness instead of giving in to the Devil.

I agree - this dude should be executed, he's invalidated any right to live, and only the victims family should have any say if he lives or not.  That said, the same should go for all the other cretins who show absolutely no regard for innocent people's life...

Why should he just go back to prison? A person like that should be executed on sight.

Comment by TamHodge on November 13, 2011 at 9:18am
the most disturbing part of this for me is the fact that he has a gf. women we need to set higher standard for ourselves. God lord he's an animal. A waste of 9 good months. A stain on the fabric of our society!