Star Brim is expected to give birth in less than a week - and federal agents have agreed to let her remain free, until she gives birth.

Star was one of 18 defendants named in a sweeping federal indictment of gang members in the Southern District of New Yorky. The feds say that Star is the highest ranking female member of the gang. She was charged with slashing a person and participating in a racketeering conspiracy.

The next question is - will Cardi B be charged next?

Cardi is an open and proud member of the 59 Brims. While she claims to be "inactive", she has explicitly stated that she's a member of the gang and has “put in work” for the gang.

It's not clear whether the Feds targeted Cardi - or whether any of the members charged will snitch - and reveal any possible crimes Cardi committed while associated with the gang.

The Stripper Bowl is an annual event thrown by Cardi B and Migos' management Quality Control - where $1,000,000 is thrown to dancers. But this year, the event was an utter disaster.

And many dancers are claiming that they were left "broke" and "stranded" after the chaos of the event.

The event took place on Monday night - one day after the Super Bowl in Miami and the event was sponsored by Quality Control's CEO Pierre "Pee" Thomas and NFLer Edgerrin James.

During the Stripper Bowl, the club throws out $1,000,000 in cash - which is for the dancers. And that's on top of the money that they make from the clientele. So dancers come from all over the country, to take part in this event.

But this year, things went left. First off, the club promoters allegedly charged the dancers money, just so that they can dance at the event. Here's how one dancer explained the fees they were charged:

The event started off fine - but when the money was dropped from the ceiling, things quickly got out of control:

Also - the club appeared to have allowed too many dancers into the event - close to 1,000. So there wasn't enough money to go around.

Here's Cardi B explaining why she didn't feel the need to tip the dancers at the event:

Then chaos broke out. One woman was accused of allegedly trying to walk off with a bag of money that she didn't earn:

3,829 people are talking about this

It turns out that some of the men, decided to steal the strippers money too. Here's video of a man, who admitted to stealing the money that was thrown to the dancers:

RT @BXHONCHO: LMAOOOOOO THIS N**** HIT A LICK AT THE QC STRIPPER BOWL 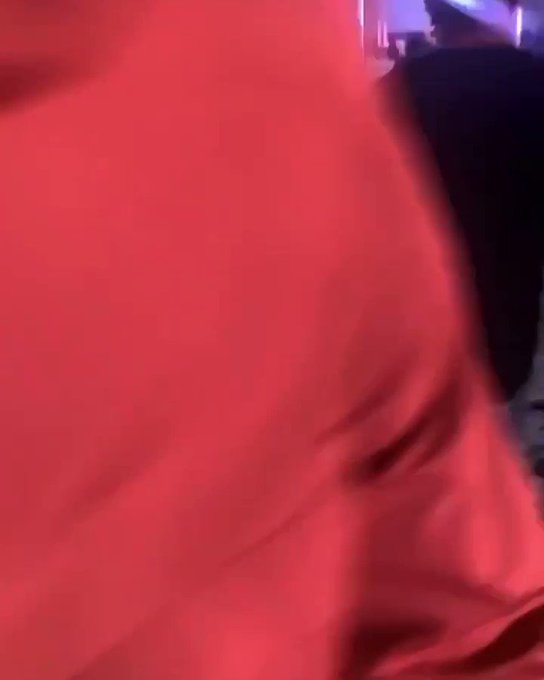 166 people are talking about this

After the night was over, a few dancers tried to stage a protest at the nightclub. But security quickly shut it down, and physically threw the dancers off the premises:

She must not have paid rent before she left to miami

386 people are talking about this

Other dancers were upset, claiming that they made far less money than they would have on other nights:

A lot of dancers were not happy with QC’s #StripperBowl

199 people are talking about this

And there are reports that many of the dancers did not even make enough money to buy a plane ticket home, so some are currently stuck in Miami.

A few strippers stuck in #Miami after super bowl weekend

they only had a one way .. ain’t make no money

Female rapper Cardi B is going off on rapper Joe Budden and the reporters at Access Hollywood. Cardi is upset that both Joe and Access Hollywood have been criticizing her parenting, and Cardi SNAPPED.

It all started when Access Hollywood conducted an interview with Cardi, and twisted her words to make it appear that she was a neglectful mother. The same day, on Joe Budden's podcast, his co-host Mal also claimed that Cardi wasn't a "real" artist because she's taken too much time off from music, since giving birth to Kulture.

Cardi B Defends Herself Following "DRUGGING Men and then ROBBING th...

Cardi blew up on both Joe and Access Hollywood.

The Bodak Yellow rapper went on a long expletive-laden rant against Access Hollywood and Joe. During the rant, Cardi threatened to "spit" in the face of Joe and his blogging sidekick Mal. Cardi also told both Joe and the folks at Access Hollywood that she "hoped their mother gets AIDS."

“Don’t cut sh*t off to try to make me look like a f*** a** mom because that’s something that I’m not!” the MC screamed to her 59,000 Instagram live viewers. Cardi claims she explained that she tries to spend as much time with Kulture as possible, and told Access that she would have to be in a situation where Kulture had too many babysitters and didn’t recognize her as a mom. She said the publication edited out crucial parts of her two-minute-long answer that would have added context. “Don’t use my mother f**king kid for clickbait!” she said.

BTW, here is the Access Hollywood interview that got Cardi so hot.

Cardi B is indicted by a grand jury on multiple charges related to a New York strip club incident, and she's facing 14 years in prison if convicted..

The 14 charges include misdemeanor reckless endangerment, criminal solicitation, conspiracy, harassment, and assault, as well as two counts of felony attempted assault with intent to cause serious physical injury.

Cardi previously rejected a plea deal in connection with the incident, which—as claimed in previous reports—revolves around two women who claim to have sustained injuries during a fight they allege began because of a request from Cardi.

Thursday night, Cardi was honored with the Songwriter of the Year award at ASCAP's Rhythm & Soul Music Awards in Beverly Hills.

"[With] everybody saying I'm not this or that, sometimes I gotta see it and feel it for myself because it's hard," Cardi said when accepting the award, per Billboard's rundown.

Cardi B wasn’t joking when she said she had severe side effects from her recent plastic surgery.

Last month, Cardi B was forced to cancel a couple of gigs, and she said it cost her millions of lost revenue in the process. She had little to no choice but to cancel the performances because her body needed to recover from her recent liposuction. The beauty about the "PRESS” rapper is that she isn’t shy about getting her body done. She previously revealed that she did liposuction and get some work done on her breast to get her body back into shape after giving birth to her daughter Kulture.

This weekend, Cardi B shared a photo of her severely swollen feet to silence some of her critics who suggest that she is lying. Some of her detractors are alleging that tickets to her shows are not selling, which is the reason behind the cancellations. NOT due to ticket sales,” she said. “Stop fakin s*** f*** outta here.”

The photo also left some of her more hardcore fans a bit shook when they see how badly her feet were swollen. She explains that her stomach and feet would “burn when I get puffed up.”

“OMG this look so bad and so painful like please Cardi B take some time off for recovery because this sh*t look hella serious like your feet look like you need to go to the hospital asap to get check for blood clots or something,” one fan wrote. 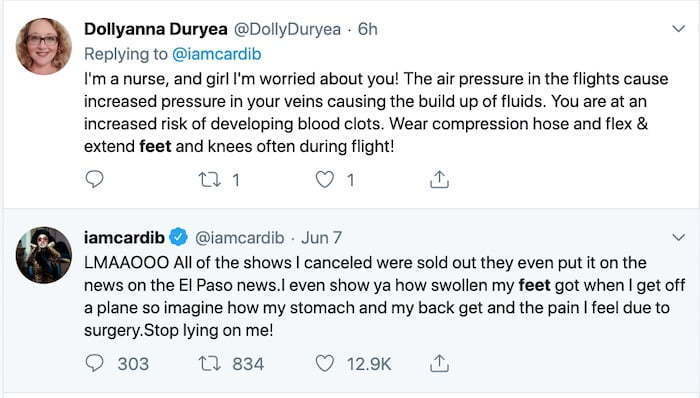 “I’ve seen swollen feet before but nutten like this she needs to take a leave of absence for sure like those who criticizing and harassing her need to get a life this is real life,” another fan wrote.

“Just looking at dem feet makes me scared for you mama kmt stop listening to dem haters and get your recovery rest,” another female said.

My what ugly feets she has....this is the new low for Black people, the trash has taken over.

Comment by evolution on October 11, 2019 at 9:50am
She doesn't behave like she's a mother. I don't know how blackmen can wife these chicks.

Cardi is such an imbecile. Her emotions will be her downfall.

That is normal, she is a blow up doll that malfunctions sometime, and that is a test tube baby and her mate was once a women.

Comment by vaughn mitchell on June 12, 2019 at 7:18pm
She need to take her ass to the gym, and work off the fat instead of doing lipo.

I guess the moral to the story is Knock It Off. Stop being so insecure and move on with your career and your new family. You have so many more pressing issues in your life. If you want a cold reminder just ask lil Kim.

The price of  about 25 years of looking good in very high. You hit 60 and now taking 6 medications per day, and the body is now flabby and saggy.  Some of us sacrifice our health for wealth when we are young, then when we get old we have to give up most of our wealth to maintain our health.