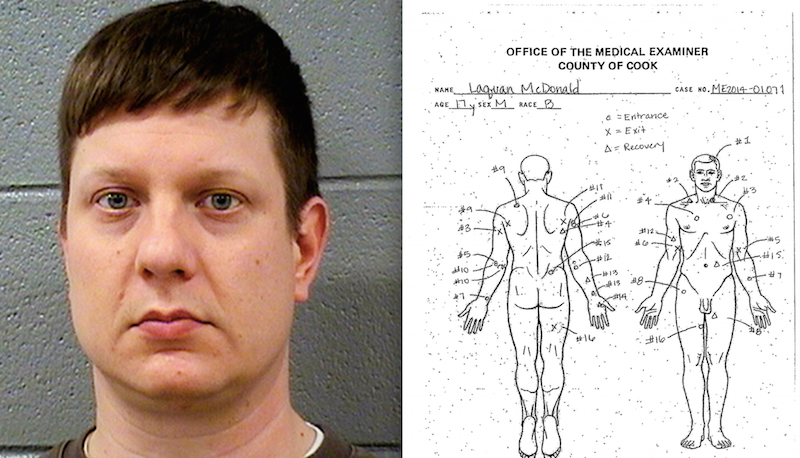 
There was surveillance footage of the fatal encounter between Chicago police officer Jason Van Dyke and a teenage suspect in the parking lot of a Burger King—until the cops came and a substantial portion of the video mysteriously vanished, a restaurant manager says.

On Tuesday, Van Dyke was indicted on first-degree murder charges in connection with the sixteen shots he fired into 17-year-old Laquan McDonald while responding to an Oct. 20, 2014 report of an armed man in the Burger King parking lot.


The fatal incident was caught on Van Dyke’s dashcam, which became the subject of a protracted legal battle between the media and the police, who argued its release would “hamper ongoing investigations.” Last week a judge finally ordered the video—described by one witness as “an execution”—be released by Nov. 25.

But there may have been other footage the public will never see: According to a Burger King district manager, almost an hour-and-a-half of pertinent surveillance recording disappeared the night of the shooting.

According to NBC, the restaurant—located at 4060 S Pulaski Rd—boasts a series of outdoor security cameras that ostensibly captured the lead up to the shooting (which may have actually concluded outside the range of the cameras.)

But an inexplicable gap emerged after cops examined the footage. ViaNBC:

After the shooting, according to Jay Darshane, the District Manager for Burger King, four to five police officers wearing blue and white shirts entered the restaurant and asked to view the video and were given the password to the equipment. Three hours later they left, he said.

The next day, when an investigator from the Independent Police Review Authority asked to view the security footage, it was discovered that the 86 minutes of video was missing.

Darshane tells NBC the cameras and video recorder were “on and working properly” the night of the shooting.

“We had no idea they were going to sit there and delete files,” Darshane said. “I mean we were just trying to help the police officers.”

A spokesperson for the Independent Police Review Authority tells NBC in a statement, “We have no credible evidence at this time that would cause us to believe CPD purged or erased any surveillance video.”

The dashcam footage is expected to be released sometime on Wednesday.