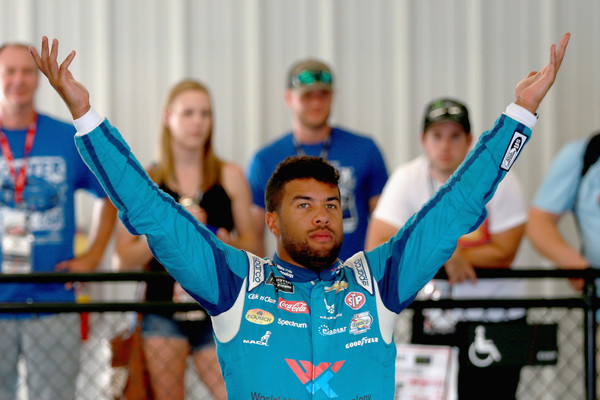 Bubba Wallace has made history by becoming the second Black driver to win at NASCAR’s top Cup Series race on Monday at Talladega Superspeedway.

“This is for all the kids out there that want to have an opportunity and whatever they want to achieve, and be the best at what they want to do,” Wallace said as he choked back tears, NPR reports. “You’re going to go through a lot of (BS). But you always got to stick true to your path and not let the nonsense get to you

“Stay strong. Stay humble. Stay hungry. Been plenty of times when I wanted to give up.”

Wallace is the first Black driver to win at NASCAR’s elite Cup level since Wendell Scott in 1963.

“Finally, it’s official, you’ve done it!” said Bill Lester, a Black NASCAR driver, in a tweet to Wallace. “So proud of you and what you’ve accomplished. Your win moves the @NASCAR needle forward on so many fronts. Glad I was a witness.”

In June 2020, NASCAR notified Wallace that a noose was found hanging in his garage stall at the Talladega Superspeedway.

After an investigation into the incident, the FBI declined to file any hate crime federal charges.

According to a statement from U.S. Attorney Jay E. Town and FBI Special Agent in Charge Johnnie Sharp, the noose had been in the garage since last fall, per USA Today.

Wallace “was not the target of a hate crime,” NASCAR said in a statement.

“There is no place in our sport for this type of racism and hatred,” said NASCAR President Steve Phelps in a press call with media at the time. “It’s not who we are as a sport.”

Former President Donald Trump called the incident a “hoax” and demanded Bubba apologize for it.

“Has @BubbaWallace apologized to all of those great NASCAR drivers & officials who came to his aid, stood by his side, & were willing to sacrifice everything for him, only to find out that the whole thing was just another HOAX? That & Flag decision has caused lowest ratings EVER!,” Trump tweeted.

Wallace never saw the noose but was subjected to nonstop online harassment following the incident. As noted by NPR, he was only told about the rope in his garage by Phelps after the FBI was called to investigate.

Relevant informations thanks for sharing. We provide brass door handles available in UK.