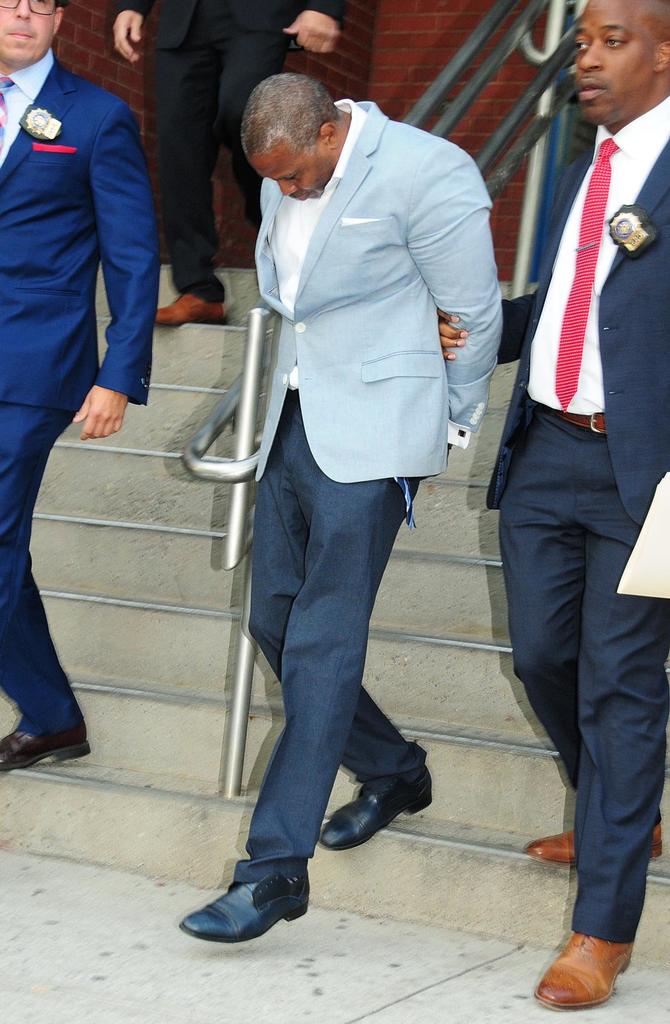 Kevin Pope, a teacher at John V. Lindsay Wildcat Charter Academy School, is led from the 41st Precinct in the Bronx on Friday after being charged with robbery and assault of a student.

A 48-year-old Bronx charter school teacher was arrested Friday for attacking a 16-year-old student who stiffed him during a drug buy, officials said.

Kevin Pope, a science teacher at the John V. Lindsay Wildcat Academy in Hunts Point, was arrested at 10 a.m. for beating the teen so badly doctors needed staples to close several deep wounds on the back of the victim’s head, police sources said.

Pope then stormed off with the teen’s gold chain, iPhone and wallet — apparent compensation for the money he lost in a botched marijuana buy involving the teen, cops said.

The alleged attack took place on Seneca Ave. near Hunts Point Ave. on Wednesday — about two blocks from the school.

Students at the charter school were stunned that the teacher — described as a “cool guy” — had been arrested.

“(He was) a straight up teacher,” said one student, who wished not to give his name. “He’d make you understand the lessons. I never knew him to be shady.”

Students said Pope was fairly new to the academy, a privately run, publicly funded charter school for older students who have dropped out of traditional schools or who have criminal histories. 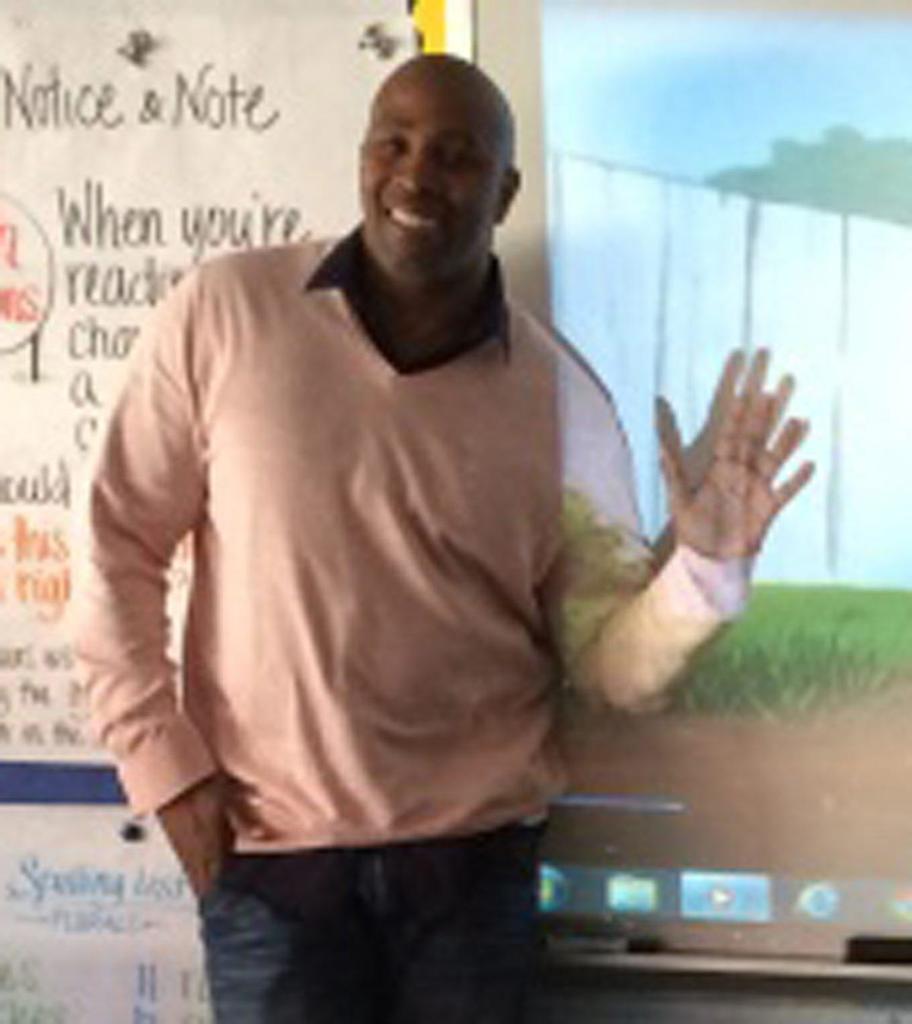 Kevin Pope beat up the teen so badly after he refused to give him back the $4,000 meant for about a pound of marijuana.

A spokesman for the school had no comment on Pope’s arrest when reached by phone Friday.

The teen told Pope he had a drug connection in Manhattan in June.

The pair went to see the dealer and Pope ponied up $4,000 for about a pound of weed, possibly in the hopes of reselling some of it, police sources said.

But after the dealer asked for $7,000, the teen backed out of the deal and walked off with Pope’s money, cops said.

On Wednesday, the troubled teacher approached the teen, demanding his money back.

When the student didn’t fork over the cash, Pope attacked him and ran off with his property, cops said. The teen told cops Pope approached him demanding the cash back after he pocketed it and never bought the drugs.

“You better get me my money or I will kill you!” the teacher said after the beating, sources say.

Pope was charged with assault and robbery. Dressed in a white dress shirt and light blue sports jacket, the Harlem resident was surprised to see reporters outside the 41st Precinct stationhouse as he was escorted to central booking.

“When I heard this, my brain rattled,” said one of Pope’s neighbors, who refused to give his name. “He’s a good-natured person. I can’t believe it.”

Other neighbors described Pope as a friendly soul who went out of his way to help building residents.

“He’s so nice,” said Shanti Smith, 16. “I see him every morning. He fixed my computer a couple of times when it had a virus.”

Listen, grown-up man, he does this. Was it necessary to mix teaching students, buying drugs, and involving a 16-year-old teenager in all this! And what will happen next? And these teachers forbid us to use such DoMyEssay services. At the same time, they violate the law. Guys, please advise who can write my essay for me? Although it is illegal, I hope I will not be beaten by the teacher for using outside help, lol.

Comment by Alicia Johnson on September 26, 2016 at 7:03pm
Meanwhile the kid is rocking the newest air jordans and an iphone

Comment by lynz on September 26, 2016 at 12:48pm
@ mr1stroke, I know you know brother. #1 rule is to have an exit strategy. S*** he didn't even cover his tracks.. Then allowed his emotions to get the better of him when he realized he got got by a youn'n. He's an amateur. Lmao!

lynz my uncle told me similar but same result: he always say before doing something stupid or anything illegal think about the consequence first just to make sure it out win the gain or can i suffer the consequence, he also says when investing anything whether its time or money always think about the reward not the work or how much just to make sure the reward is worth it, so i know what you mean

Comment by lynz on September 26, 2016 at 11:10am
I know I was already smoking at that age so for me it's more about his job and the position he put himself in and the possible consequences if the transaction went left like it did. It just wasn't a smart move! We living in a time of "survival of the fittest" in this case "survival of the smartest" & he flopped. He's clearly didn't graduate from the streets, because he would've know better.
My father always told me when making plans always include the escape rout. He walked into a dead end!!! STUPID!!!!

Comment by Bombahdrop on September 26, 2016 at 10:02am
Thats not the point hes a teacher what he does outside of work is his business. He cant be a drug lord and a teacher to children at the same dam time. He teaching kids to do illegal s*** that aint right. How many other kids he's done this too. Smdh shame on grown ups.

Comment by lynz on September 26, 2016 at 7:10am
That was just stupid & desperate!!!! Mixing teaching, marijuana & students in the same pot is a foolish combination. He looks old enough to have known that. Smdh...

Comment by Mr. Johnson on September 25, 2016 at 8:44pm
So called teacher is a dumb ass for doing a drug transaction with a student in the first place. Grown men suppose to do grown men things. Not with kids. Especially kids you are suppose to be teaching and guiding. Now he will be taking lessons of his own on Riker Island. Hope it was worth it. And by him doing this I wonder if it rings true that teachers are under paid? Another black man bites the dust. One way or another they are getting us. Can we say mass incarceration.

Big Shot... in a situation like this the teacher was stupid for the way he handle it, if he had 4gs to spent he should also have $100 using dudes around that student age to beat his ass or bring him to a secret place and teach him a lesson, when you do business on the street no one gets a pass, and its a must you teach those young boys who set the path, thats the lesson i learn on the sreets where i came from, s*** i might of made sure he dont walk again mufuckers want easy money but always trying to rob the wrong person, i dont let no one get away with nothing revenge is always part of my plan and a real mufucker handle revenge like a business, make a plan, know where your targets where about and set the time when it will happens and thats all it takes you will never go to jail, if you have problem with the next man if he slaps you in front of people or even your family and want to end him walk away and tell him its cool, give him about 6 months to a year and witness his funeral this aint no mufucking game