Britain's Fattest Woman At 630 LBS, In Hospital To Lose Weight. Dies After Gorging On Buckets Of Fried Chicken Snuck In By Family Members 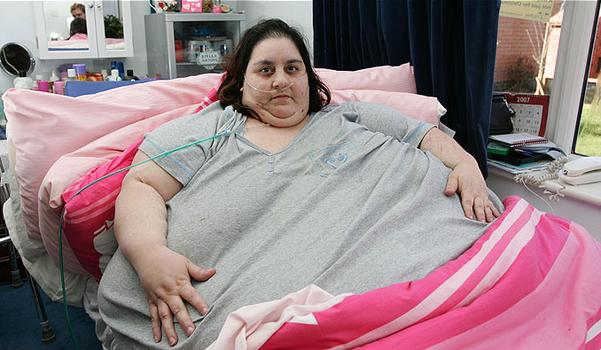 A MUM revealed in The Sun to be Britain's fattest woman at 45st (630 pounds) has died after secretly GORGING in hospital.

Sharon Mevsimler, 40, was on a strict diet in Chelmsford, Essex, but had family buckets of chicken and fish and chips smuggled in.

She died of a heart attack nine days after we told of the five-footer's grub addiction.

Sharon begged her family to sneak take-aways into the hospital where she was on a strict diet and horrified witnesses saw relatives smuggling fast food to the gorging mum of four.

And she was so huge that a trolley COLLAPSED as she was wheeled to the mortuary.

Last night an NHS source told The Sun less than two weeks after we revealed how Sharon was the UK's most overweight woman: "She simply would not stop eating.

"She obviously had a serious underlying problem with food, but did nothing to help herself.

"Those who came to visit her in hospital did her no favours.

"We saw them bringing in various fatty foods like fish and chips and huge portions of fried chicken when she should not have been eating these things.

"It was infuriating to see her literally eating herself to death."

Earlier this month The Sun told how devoted husband Bulent had been forced to give up his job to care for Sharon.

Before she was taken to hospital she had spent four years too fat to get out of bed in Chelmsford, Essex.

The mum - whose weight was NORMAL when she got married in her 20s - blamed post natal depression for her piling on the pounds as she became addicted to comfort eating.

She blasted the NHS, saying: "I have been left to die. If I was anorexic I would get proper help. But no one has sympathy for obese people." 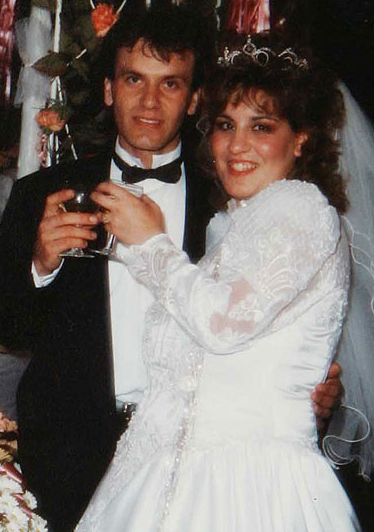 
Sharon's bulk put so much strain on her lungs she needed an oxygen tank to breathe.

She was repeatedly warned she was eating herself to death.

But she refused to stop bingeing - despite undergoing a £30,000 op on the NHS earlier this year to have a gastric band fitted. It was meant to have curbed her gargantuan appetite.

Broomfield Hospital in Chelmsford - where the mum had been a patient for two months - refused to comment yesterday.

But a source confirmed: "She died on Saturday. Because of her weight, hospital staff had to be very careful how she was moved." Sharon's grief-stricken loved-ones were yesterday preparing to make special funeral arrangements for the mum.

A supersize coffin big enough for her will have to be found.

Yesterday one NHS worker said: "No one could believe how big Sharon was. She was so fat she could not walk."

Another told The Sun: "There is only so much the Health Service can do for someone with this kind of problem. In the past she begged the NHS for help.

"But in the end the patient turned around and threw it back in their face - by going back to her old ways.

"Many people are very angry about the fact food that was known to be bad for her was brought into the hospital.

"The matter was raised a number of times, but the problem persisted. By the end many staff were at their wits' end.

"It is tragic - what we would call truly a 21st century tragedy.

"This woman was only 40. But she literally ate herself into an early grave."

Comment by Nikiesha Jobe on July 27, 2010 at 9:32pm
So sad, but her family members are to be blamed as well I understand they Loved her but they also caused her life she could have lived longer.

Comment by steffie on July 27, 2010 at 4:07pm
She's not the only one to blame. Someone had to go get it for her. After the weight became a problem, her family still gave her the bad foods. Even on he dieing bed. Family can help you or kill you. But in the end the choice is ultimately yours. You have to want to change.

Comment by Loveli on July 27, 2010 at 3:47pm
Sad.. at least she died doing what she loved best.. oh well.. the majority of people in the united states are overweight..i wonder whose fault it is?

Comment by Garth on July 27, 2010 at 12:05pm
At the very least she died happy.. Dont know why people always sneak food into hospitals and its always stuff that the patient arent suppose to have.