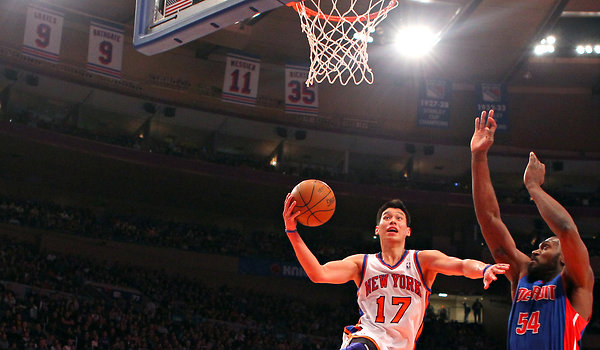 Jeremy Lin’s magical season has come to an abrupt and untimely end because of a knee injury that will require surgery.

The Knicks’ season may be over before Jeremy Lin can recover from an operation on his left knee.
Lin, the Knicks’ point-guard sensation, has a small meniscal tear in his left knee, the team revealed Saturday night. He will have arthroscopic surgery in the next few days and is expected to miss six weeks, wiping out the rest of the regular season and probably the first round of the playoffs — assuming the Knicks qualify.

“It is a big blow,” Coach Mike Woodson said before the Knicks’ home game against the Cleveland Cavaliers. “He was starting to come as a player.”

Lin’s injury is the second devastating hit the Knicks have taken in the last week. Amar’e Stoudemire, their starting power forward, is out with a bulging disk in his lower back; he also could miss the rest of the regular season.

The revelation of Lin’s injury came a week after he initially complained of soreness in the knee, in a March 24 victory over Detroit. A magnetic resonance imaging examination, performed Monday, showed what the team called a small, chronic tear — meaning the injury had been present for some time.

Lin and team officials had hoped to delay surgery until after the season, but the knee did not sufficiently respond to treatment over the course of the week. After testing it once more Saturday morning, Lin opted for immediate surgery.

“I can’t really do much, can’t really cut or jump,” Lin said at a news conference. “So it’s pretty clear that I won’t be able to help the team unless I get this fixed right now. It’s disappointing for me. It’s hard to watch the games. And I think I want to be out there, obviously, more than anything, to help the team.”

The injury marks a somber epilogue to a story that captivated much of the world and launched a movement called Linsanity. Lin — 23 years old, undrafted and largely unknown — erupted for 25 points in a Feb. 4 victory over the Nets, then strung together a series of fantastic performances, each more spectacular than the last. The Knicks won seven straight games with Lin running the offense, a streak that saved their season.

Lin, the American-born son of Taiwanese immigrants, is the N.B.A.’s only Asian-American and is wildly popular here and in China. His jersey, which was not even available two months ago, is among the league’s top sellers.

With Lin out, the veteran Baron Davis will finish the season as the Knicks’ starting point guard. Davis, who turns 33 this month, has his own health concerns. He is recovering from a herniated disk and a recent hamstring strain. He will be backed up by Toney Douglas — who was benched for most of the season — as well as the 33-year-old Mike Bibby and the rookie Iman Shumpert.

Lin will be a restricted free agent this summer. Under N.B.A. rules, no team will be allowed to offer more than the average salary, about $5 million, and the Knicks will have the right to match any offer. Lin said he saw his future in New York.

“It’s been an unbelievable journey,” he said. “I would love to keep this team together as long as we can, everybody, top to bottom.”

knicks fan...he was getting beat up by other players and no calls...i new he would get hurt

SO, THE KNICKS COUNTED ON "ONE DUDE" TO TAKE THEM TO THE FREAKING PLAYOFFS...REALLY? WHAT EVER HAPPENED TO "TEAMWORK" AND GOOD @ZZ PLAYING TO WIN A GAME? SMH YOU JERKS!!