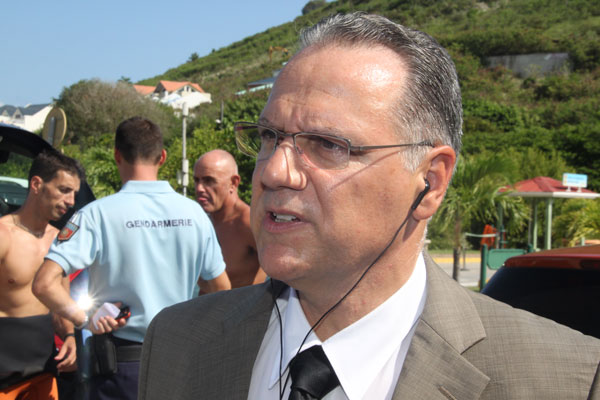 Close to 100 emergency personnel from the French and Dutch side are searching for four persons that were on board a TAI Medivac plane that departed the L'Esperance Airport in Grand Case at 2:39am Saturday morning enroute to Martinique. Prefet Delegue Phillipe Chopin told SMN News that he is currently in charge of the rescue operation taking place between Tintamare, Pinel Island, and Cul de Sac where it is believed the aircraft fell. Chopin said that a doctor, nurse, patient and pilot were on board when the plane fell and up to 10am Saturday morning the bodies of the victims were not found. Chopin further explained that two divers from the Gendarmerie were involved in the operation since early Saturday morning and they are expecting six more divers from Guadeloupe sometime Saturday afternoon to continue the search. Chopin said the divers managed to recover some parts from the plane which are being stored at Anse Marcel. He said an investigation is now underway which will be lead by the Prosecutor Jacques Louvier. Prosecutor Jacques Louvier was also at the Grand Case Airport on Saturday morning with the two divers that were part of the rescue operation.
Prefet Chopin said their priority right now is to find the victims  that were on board the aircraft and then they will do their best to locate the aircraft. SMN News learnt that the Dutch sea rescue team left the scene after they found the landing gear and other parts from the aircraft just after 10am.
SMN News has reliably informed that the rescue personnel already found some body parts in the water. One source on the scene said they found half of a body and other body parts of the victims floating in the water. However, Prefet Chopin said he will not confirm if the information we received is true. It should be noted that while Prefet Chopin said there were two divers from the Gendarmerie at the scene, SMN News saw that both divers had already left the scene way before those from Guadeloupe arrived. 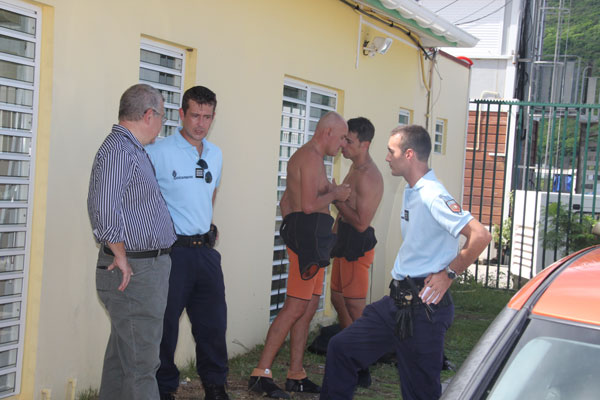 Eyewitnesses say that the aircraft burst into flames less than five minutes after take-off and the pilot tried to ditch the plane but somehow misjudged the height of the plane from the sea since it was extremely dark. Sea rescue operators told SMN News that the impact was tragic based on what they saw and recovered at the scene.
SMN News learnt that the St. Maarten Medical Center contacted a hospital in Martinique and asked that they send an air ambulance for the patient sometime late Friday evening. Sources said that an air ambulance came in at the Princess Juliana International Airport just after midnight Friday to pick up the patient but they encountered mechanical problems and the aircraft could not start for them to leave. It is further understood that is when TAI was contacted to transport the patient and the crew that came in to evacuate the patient to Martinique.
According to information reaching SMN News, a Greek-Cypriot tourist on board one of the cruise ships was taken to the St. Maarten Medical Center when he got a severe heart attack. The source said the man, was on his honeymoon on the ship and while on St. Maarten he got a severe heart attack and needed emergency medical care. President of the L'Esperance Airport identified the pilot of TAI as Bruno Le Jeune (43).
It should be noted that the French civil aviation halted the services of Jet Budget on November 15, 2011 after they were informed that TAI was having financial problems and that the Louis Constant Fleming Hospital had terminated TAI contract and awarded it to Jet Budget. According to reports from LCF Hospital, TAI's services were not in compliance with up to date medical evacuation for critically ill patients. The union once said that their timeworn and poorly equipped aircraft offers precarious transportation conditions.

SMN News has been reliably informed that a number of Tiger Sharks hindered the search and rescue of the four victims of the crash. According to reports reaching SMN News, divers from the Gendarmerie and St. Maarten Sea Rescue had to halt their mission when they saw a large amount of Tiger Sharks in the water. A source from the St. Maarten Sea Rescue said that they managed to recover the upper body parts of the victims. "Victims of plane crashes are normally cut into two pieces because of the seat belt attachment. Sea Rescue operators managed to recover the right hand side of the upper body and parts of the chest of the victims."

Prefet Delegue Phillipe Chopin identified the four victims of the Medivac crash on Saturday afternoon at a press conference. The pilot of the ill-fated TAI air ambulance has been identified as Bruno Le Jeune. The doctor who travelled from Martinique to accompany the patient has been identified as Jean Michel Dudiot, the nurse who accompanied him has been identified as Gerard Omere, both from the SMUR of Martinique, while the heart patient, a visitor to St. Maarten has been identified as Panayiotis Vrionides, a Greek- Cypriot.
Chopin also confirmed that the doctor and nurse came to St. Maarten on their own medivac plane but the aircraft encountered mechanical difficulties and that was the reason the TAI was contacted. Chopin said the investigation into the crash is being led by the Prefet of Guadeloupe and the French Civil Aviation will be arriving on St. Martin on Sunday to begin an investigation into the cause of the accident. All documentation regarding the TAI air ambulance has been seized by authorities for the investigation on the Piper Cheyenne III with registration number F-GXES.
In the meantime, the Prefet has issued an order to prevent anyone from travelling near to Tintamare Island since most of the debris found thus far was close to Tintamare. Chopin said they expect parts of the plane to wash ashore on Tintamare beach and they need to safeguard everything that is recovered for the investigation.
Prosecutor Jacques Louvier said the Gendarmes will be receiving special assistance to conduct their side of the investigation. He said that the victim was hospitalized on the Dutch side but stopped at the Louis Constant Fleming Hospital Friday night for medication shortly before he was taken to the Grand Case Airport for take-off to Martinique.
Reporters pressed both Prefet Chopin and Prosecutor Jacques Louvier for answers regarding the TAI aircraft since medical professionals at the Louis Constant Fleming Hospital made it clear that the aircraft was not in good order for sanitary evacuation. Prefet Chopin said he is aware of the decisions taken by his colleague Prefet Delegue Jacques Simmonet. He said when he arrived on St. Martin he revoked that order, and to date TAI does not transport patients for the Louis Constant Fleming Hospital. He said while there were media reports about the TAI aircraft, civil aviation did not revoke their license and their contract with L'Esperance Airport was also still valid. TAI transports medical patients that are willing to pay for private air evacuation. The evacuation on Saturday morning was paid for by the patient's insurance company.