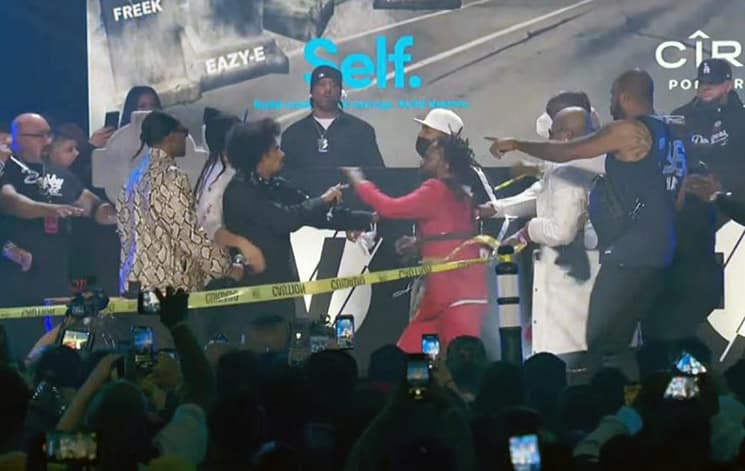 When we heard that Three 6 Mafia and Bone Thugs-N-Harmony were going to battle via Verzuz, we sure didn’t think the promoters meant it literally, but that is exactly what happened last night.

If you tuned in to see the two hip-hop groups go at each other that’s what you got. Except it wasn’t all musical if you catch our drift.

While Bone was performing “Buddah Lovers,” Gangsta Boo and DJ Paul slow danced, which pissed off rapper Bizzy Bone. That prompted the two groups to confront each other physically and with really stupid juvenile rhetoric going back and forth.

“Yo! Before we even get started, you ugly MFs ain’t finna be mocking me while I’m on this MF’ing stage. Like straight the f*c* up,” said 45-year-old Bizzy.

46-year-old Juicy J shot bac: “N*gga, suck my d*c*,” and Bizzy threw a mic and a water bottle at him, Sandra Rose reported.

During the brief scrap, we heard Gansgta Boo, the baby of the bunch at 42, yell, “Bizzy Bone, you a hater. You must didn’t take your pills. You weirdo azz ni**a.”

The Verzuz halted for 15 minutes while security restored order to the stage.

Bizzy Bone finally apologized, saying, “I f*c* wit y’all, but f**k dat ni**a mane… I want to apologize to everybody out there, on both sides. I’m not trying to f*c* this [Verzuz] sh*t up. Pardon me.”

The Verzuz continued with Three 6 performing a rousing rendition of “Azz And Titties.”

Fortunately, nobody got hurt and the show continued.

We have to admit, even though it was stupid and immature to see these middle-aged men act the way they did, it was hilarious at certain points.

They are too old for that nonsense.

That's why they can't have concerts anymore. Why they did a live show anyway?