Bounty Killa had a Kanye West moment at the Shaggy & Friends benefit concert and then apologised. Read what he did! 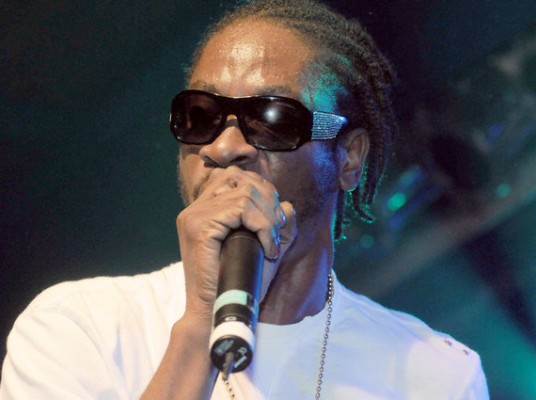 After nearly 20 years at the top of the Jamaican music industry I
have been involved in many battles - sometimes with fellow artists, sometimes with outside forces and sometimes with the state and its politicians. I've learnt to choose my battles wisely and the grounds upon which to fight them.

I've also learnt when to admit I didnt choose my ground wisely andSaturday night's Shaggy & Friends' show was one of those occasions.

With so many politicians and members of the upper echelons of
corporate Jamaica present, an audience I rarely get the ears of, I
got caught up in the moment while expressing myself. I now realise it was inappropriate and extend my apologies to Shaggy, his sponsors, benefactors and all in attendance who were offended by my performance.

If ever there was a Kanye moment in local entertainment, it happened when the cross, miserable, angry Warlord bounced on stage at the show at the dying moments of the concert and killed what, up until then, had been a very good thing.

Killa pounced upon the “battyman dem” at the show who didn’t “give enough” to the worthy cause, the Bustamante Hospital for children. It was a real Kodak moment to see the look on the faces of those in attendance at this concert where ticket prices ranged from a high of $30,000.00 to a low of $5,000.00.

Bounti finally got a chance to face his target audience and he cursed them off in the best way he knew how “oonu a battyman, oonu don’t give enough to charity ... all of oonu man who don’t have nuh pickney .. oonu a battyman.”

Poor Shaggy looked as if he jsut wanted to fold up himself and hide in on of the guitar cases, but instead he quickly exited the stage. Nobody was going to videotape him on stage during Bounti’s anti-gay tirade and make it look as if he was in support of Bounti’s statements.

Shaggy must have given some signal to the sound people, because as soon as Bounti and Mavado left, the sound system started playing music. Patrons just stood there, waiting for something to happen on stage ... anything except the return of Bounti with more venom. Finally, as the capapcity crowd made its way through the gates, the MC went on stage and formally brought the curtain down on Shaggy & Friends.

Comment by KayKay on January 8, 2010 at 12:49pm
Jamaicans could raise enough money for Air Jamaica!

Comment by nyahbinghi on January 8, 2010 at 11:47am
bounty sometimes u got fi humble oonu self straight money u ah mek, i dnt have da position u have but i would luv it and yes i will b gud tlk whn its time fe tlk and weh it time fe quite seen?

YOU SHOULD HAVE TOLD SHAGGY SORRY.
TO HELL WITH THE REST OF THE CORRUPT PEOPLE.

Comment by Amuse Me on January 7, 2010 at 12:51pm
it it just me or his hair always looks like he did it himself? Bounty please get your hair braided a day before you perform not a month.

Comment by MrOneLove on January 7, 2010 at 3:55am
Why apologise Bounti, you say these things downtown to poor people all time..What,, you forgot were you where??? On the Prime Minister lawn with Jamaica's so called upper echelons of society..It's one voice for all,bredrin..Which side of the fence are you on.....