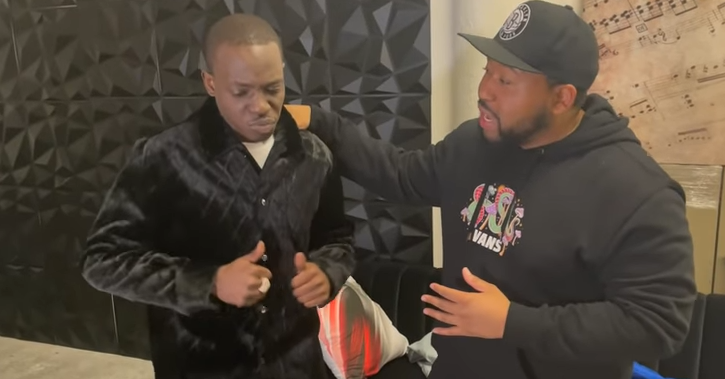 Vybz Kartel is being given his flowers on the international stage as just recently DJ Akademiks and rapper Bobby Shmurda had a link up on “BTS OFf The Record Episode” where they were discussing music until their conversation eventually landed on the “Worl Boss’s” name after which the two went into an enthusiastic talk about their favourite songs from the artiste.

As for Shmurda he did not give the name of his “badman” song pick but went on to highlight the lyrics of the song which goes “Dem cyaan grow and bad dem haffi born bad” which the popular radio DJ counteracted with “Brooklyn Anthem” from Kartel.

As for the girl’s song segment, DJ Akademiks went on to make it known that his favourite was “Love Dem” which he and the “Hot N****” artiste went on to sing in a symphony, along with the “Teacha’s” “Freaky Gyal song” which they brought into the conversation after bringing up female Dancehall artiste Shenseea and her level of freakiness which they also spoke a little about concerning how nasty she can get.

Watch DJ Akademiks and Bobby Shmurda hailing Vybz Kartel as the best artiste of all time below.

As for DJ Akademiks, his favourite “badman” song from the “Gazanation boss” is “Pass mi gun” released in the year 2009 after which he went on to make it clear that in any genre the ‘Teacha’ is his favourite artiste, even over Toronto rapper Drake, Bobby was quick to agree with that statement saying “that’s mines too”.

Comment by Yasmin on April 25, 2022 at 12:18am
Well it's clear that neither one of them no what the hell they're talking about.