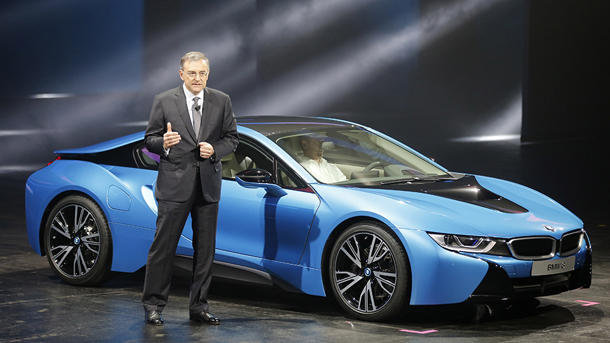 Either we are finally living in the future the automakers have been promising us for all these years, or we are undergoing a paradigm leap in the way that outlandish automotive concept cars are able to forecast our plausible reality. Whatever the cause in this chicken/egg tautology, the production version of the BMW i8 plug-in hybrid just revealed here at the Frankfurt Auto Show looks hauntingly similar to the hypothetical versions that the Bavarians have been unveiling on show stands, and in the impossibly-punctuated film Mission: Impossible – Ghost Protocol, for the past few years — fanciful materials, bent Aalto-esque flanges, scissor-hinged doors, and 94 mpg efficiency figure intact. And it apparently will drive like the future as well, with a teensy, but broadly turbocharged, 1.5 liter three-cylinder engine amidships that at 228 hp puts out more power per liter than any of BMW’s other vehicles (M cars included), mated seamlessly with a 129 hp electric motor up front. Creating even more intriguing complexity is the fact that each of these powerplants receives its own transmission: a two-speed unit for the battery whizzer, and a six-speed automatic for the gassy one. Like Dolittle’s Pushmi-Pullyu (but with less gazelle and more unicorn), these two mills can work individually or in tandem, so the i8 can act as a front-driver in the 22 miles of range available in all-electric mode, a rear-driver when chugging only gasoline, and, under hard acceleration — such as when it’s trying to hit its projected 4.3 second sprint to 60 mph — going forward with all four wheels. Total range: an un-electric 310 miles. (We look forward to discovering which wheels we can make it use when speeding in reverse.) Not complex enough for you? There’s also a second, supplemental 20 hp electric motor/generator belt-driven off the engine. It’s there mainly to help start the car and juice up the battery pack, but it can provide a burst of push out back as well, so the instant-on torque of the front-driving electric motor doesn’t cause the prow of the car to peel away from the stern. Speaking of peel, the i8 has slightly fewer peek-a-boo panels than it did as a concept, and in the places where its skin is peeled back and its novel carbon-fiber-reinforced plastic (CFRP) structure is exposed, the material — for which BMW has invented a new, and less labor-intensive construction process — looks less like the glossy woven threads we are used to and more like a blurry schmear of matte caviar. We love caviar so, mmmmm. Worshiping at the altar of weight saving, there’s also the obligatory magnesium and aluminum. Also, in a road-going first: The iPhone-protecting Gorilla Glass, which in our practice takes far less than pure primate strength to shatter, lurks behind the driver in the panel separating your precious head from vagaries of the gasoline motor. 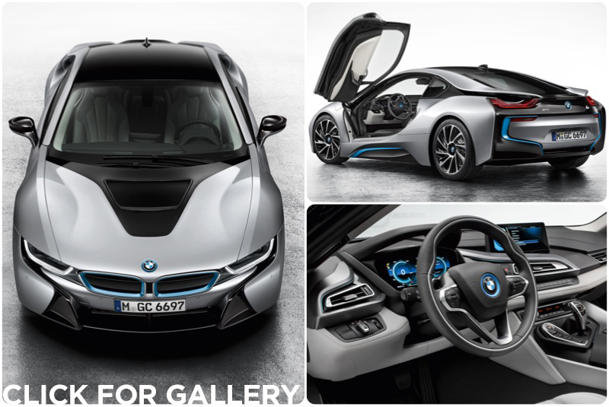 We’ve already overheard grousing about a $135,925 car — the price U.S. BMW dealers will charge when the i8 arrives this spring — that can’t beat a $50,000 Corvette in a drag race. But that criticism misses the mark completely. This car is not waging battle with the Corvettes of the world. It is in its own league, the league of incredible, handsome, outrageous, advanced, lifestyle accessories: an exotic sports car that looks otherworldly, accelerates faster than anyone needs it to, can carry two adults and two kids comfortably, and gets an astounding 94 mpg. Welcome to tomorrow, now. ..