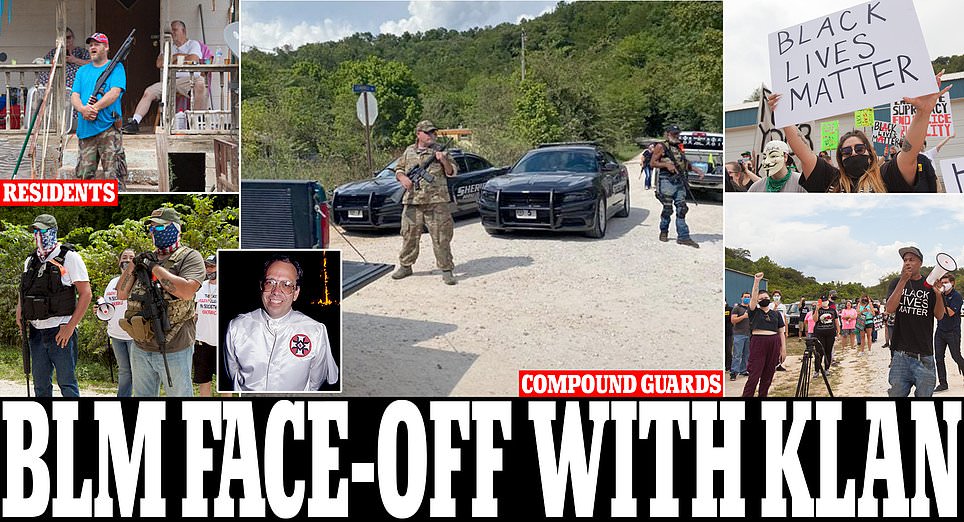 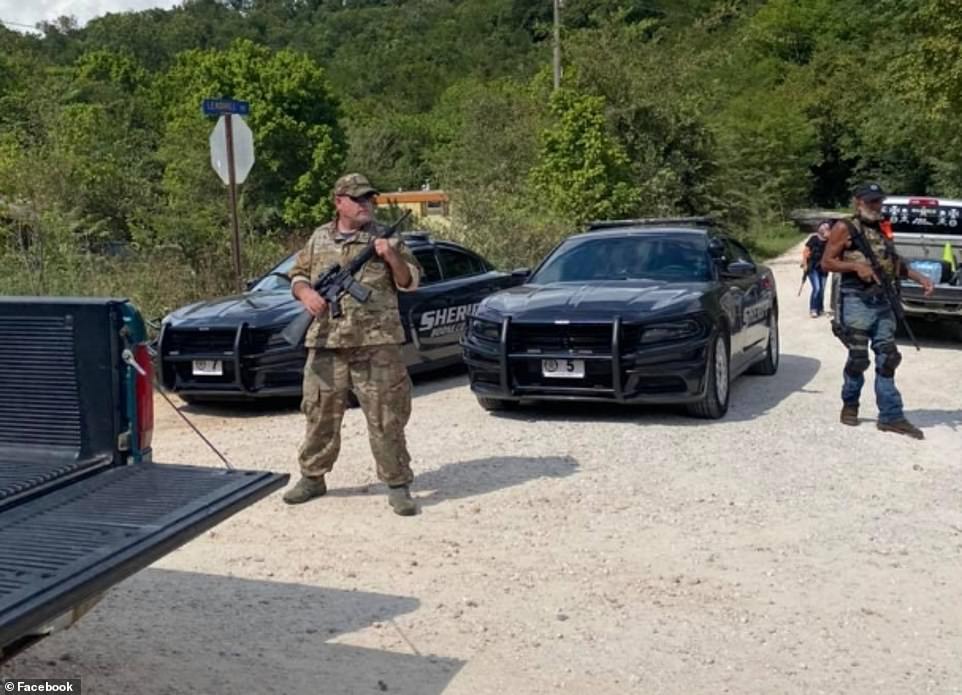 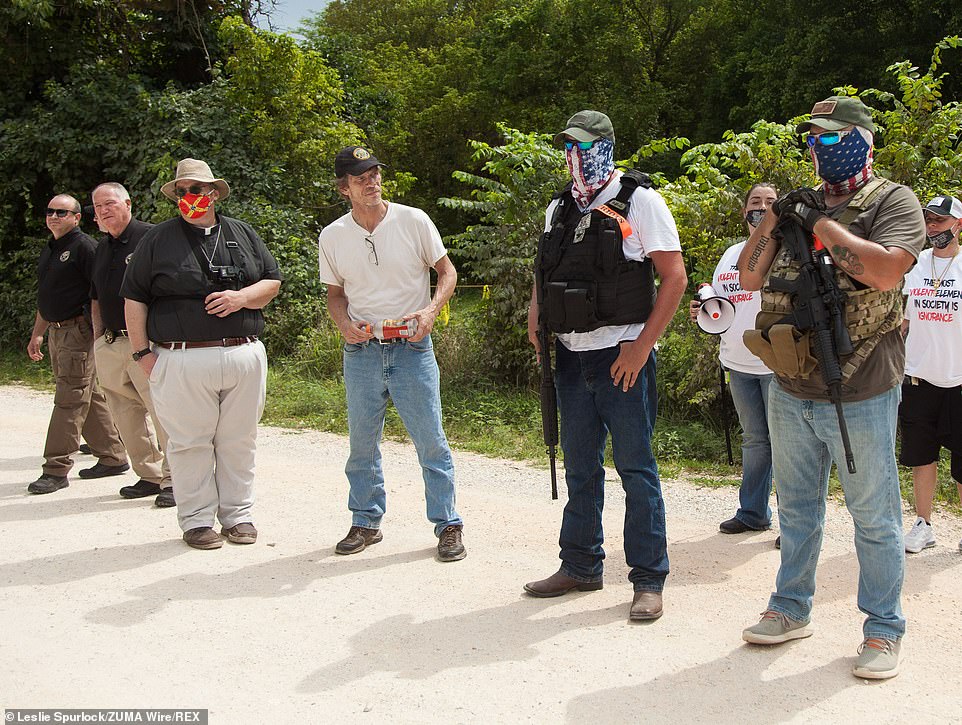 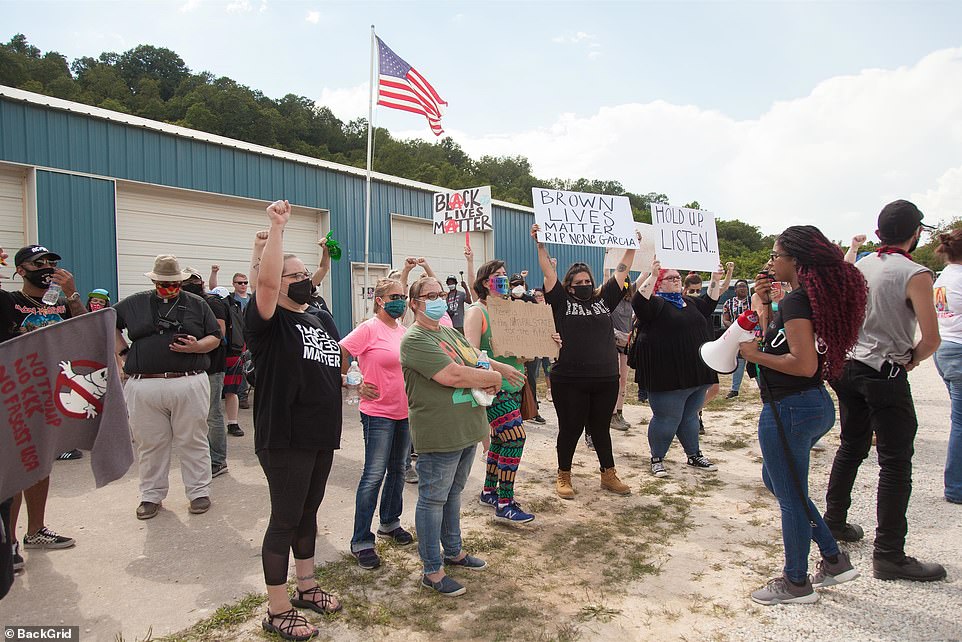 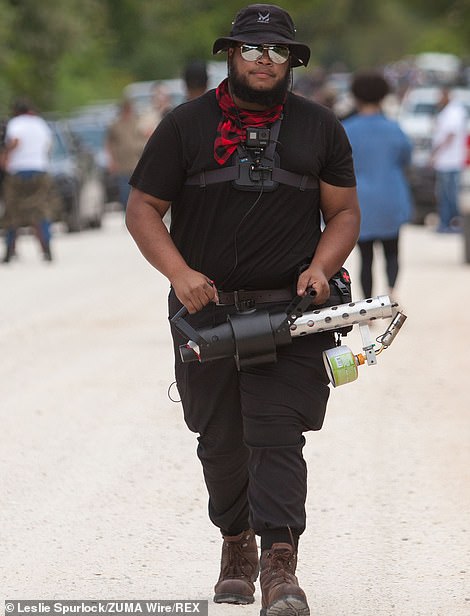 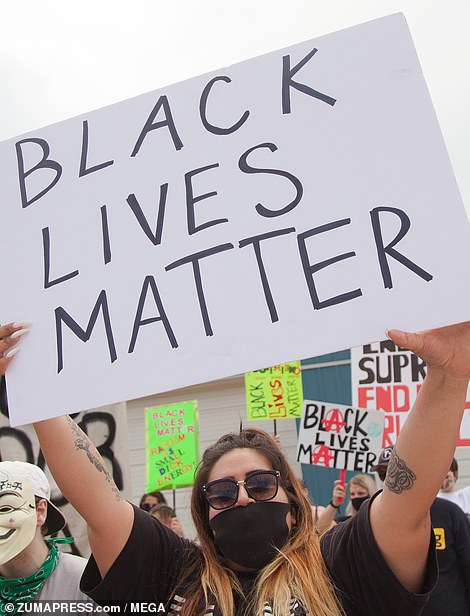 The protest comes just four days after a viral video labeled nearby Harrison, Arkansas, as being 'America's Most Racist Town' and the 'Ku Klux Klan's headquarters 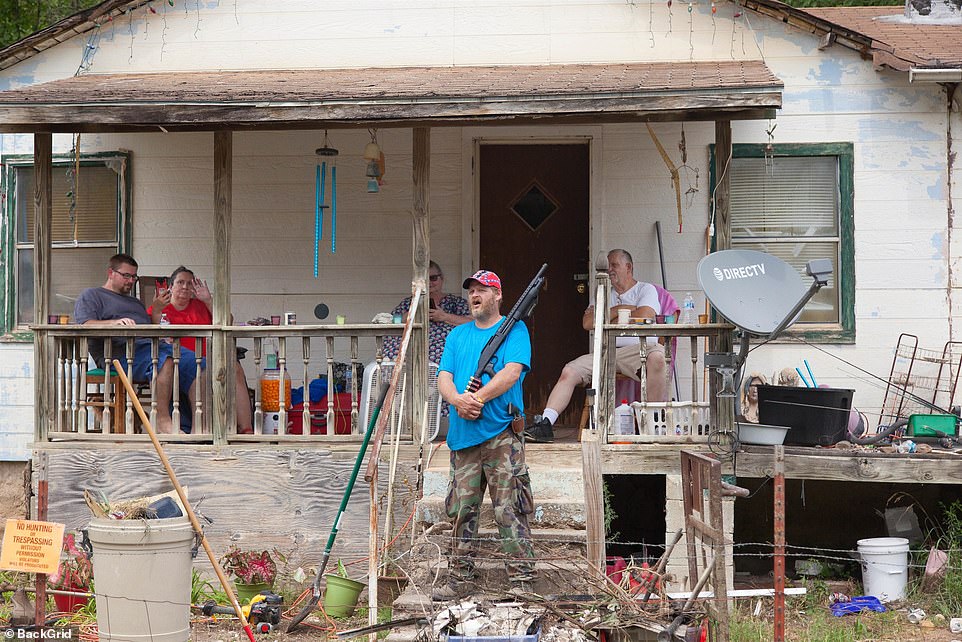 Local Zinc residents were spotted carrying guns while on their porches, watching the protesters Sunday 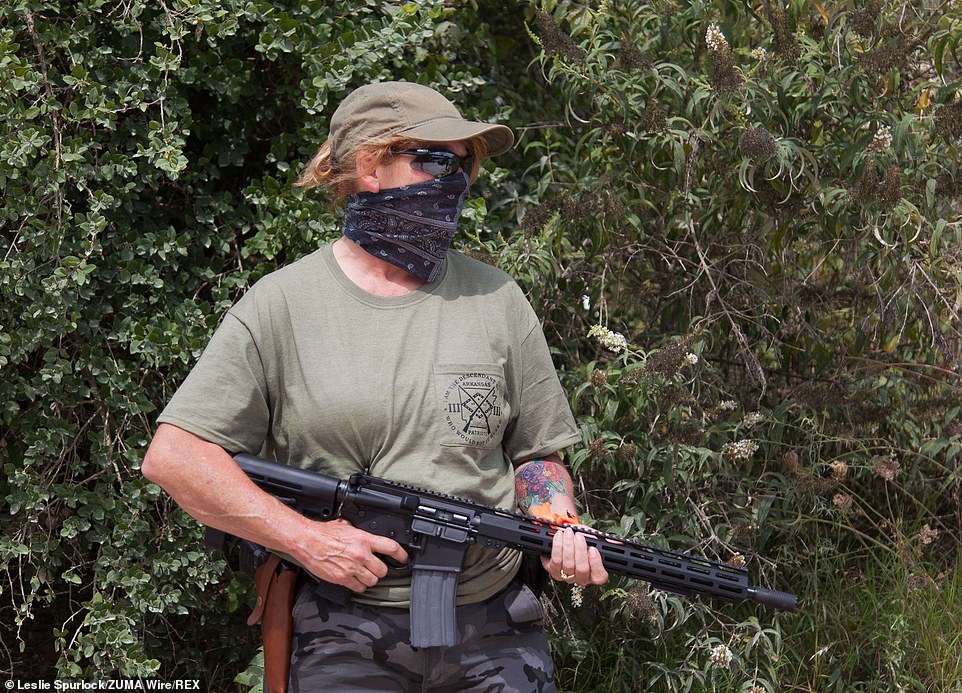 A local resident is seen armed while watching over the protesters on Sunday. Militia groups were said to have been spotted in the town during the protests

Who is Thomas Robb?

He is said to use three post office boxes in Harrison, Arkansas.

He has a compound in Zinc, Arkansas.

He is pastor of the Christian Revival Center, a 'Christian Identity' center based in Zinc.

Sunday's protest was organized by Bridge the Gap NWA and also promoted by Ozarks Hate Watch, drawing Black Lives Matters protesters from as far away as Branson and Springfield.

The protesters met at the Harrison Police Department before traveling in a caravan towards Zinc, according to 40/29 News.

Along the road to Zinc, the protesters' caravan passed people holding signs that read 'Turn back,' according to photos shared on Ozarks Hate Watch's Facebook page.

Once in Zinc, the group posted pictures of armed men - some in military-style fatigues - standing in front of cars blocking a dirt road to Robb's compound.

'Militia blocking the road to the Klan Compound,' Ozarks Hate Watch's photo caption states, apparently referring to the road that leads to Robb's Zinc home. 'Too bad they didn't realize we had no intention on going to his compound.'

'You're out here in your little neck of the woods where you think you don't have to see the people that you hate,' protester Sonny Cropper told KY3, explaining why he and others had traveled to the small town.

'We know that hatred is here and we still don't tolerate it.'

The news station reported that several dozen protesters had descended on the town for what they planned to be a peaceful protest.

'Several' locals were seen congregating at the other end of the town.

Photos from the protest show Zinc locals carrying rifles, standing and sitting on front porches apparently keeping an eye on the protesters and protecting their homes. 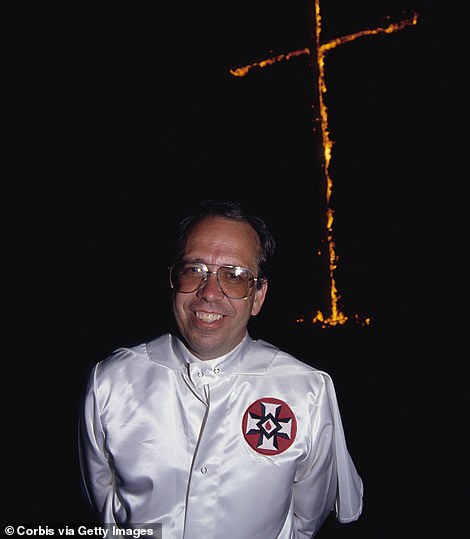 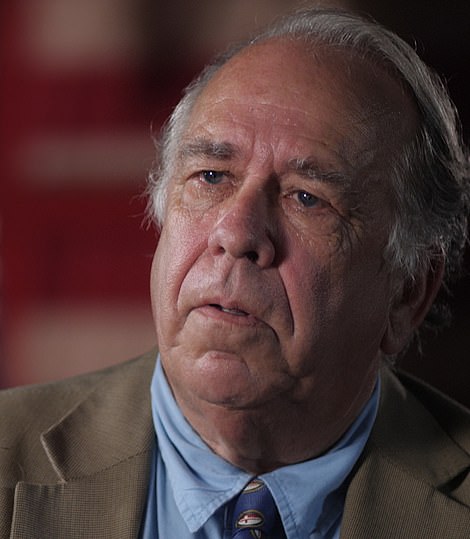 KKK national director Thomas Robb has a compound in Zinc, Arkansas. The protesters said they 'threw a barbecue in the KKK's backyard' 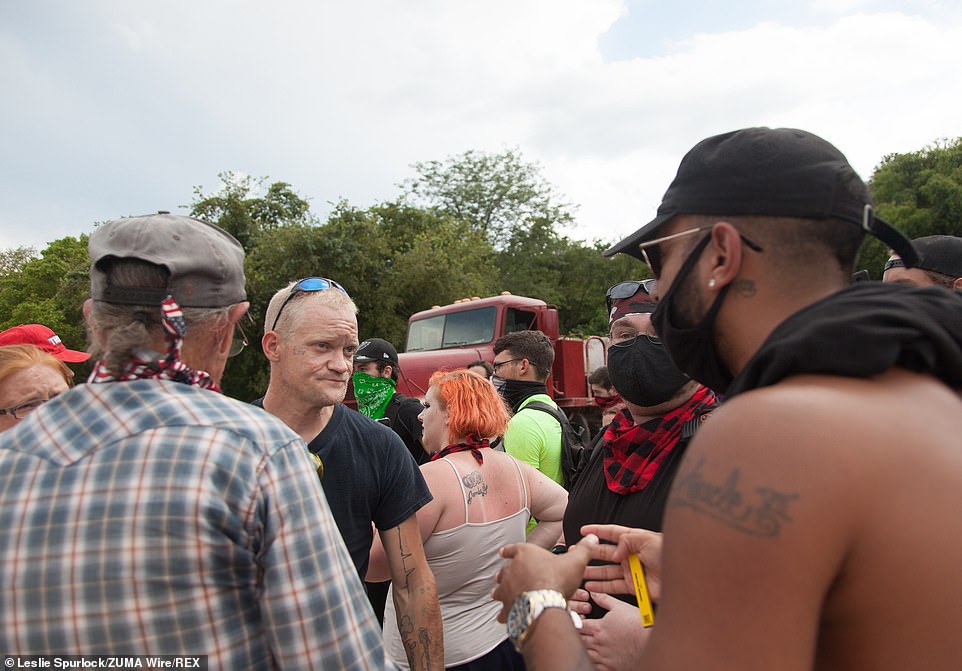 A local man is seen engaging protesters in discussion. The protesters traveled to Zinc after meeting up in nearby Harrison, Arkansas - said to be the headquarters of the KKK - on Sunday morning 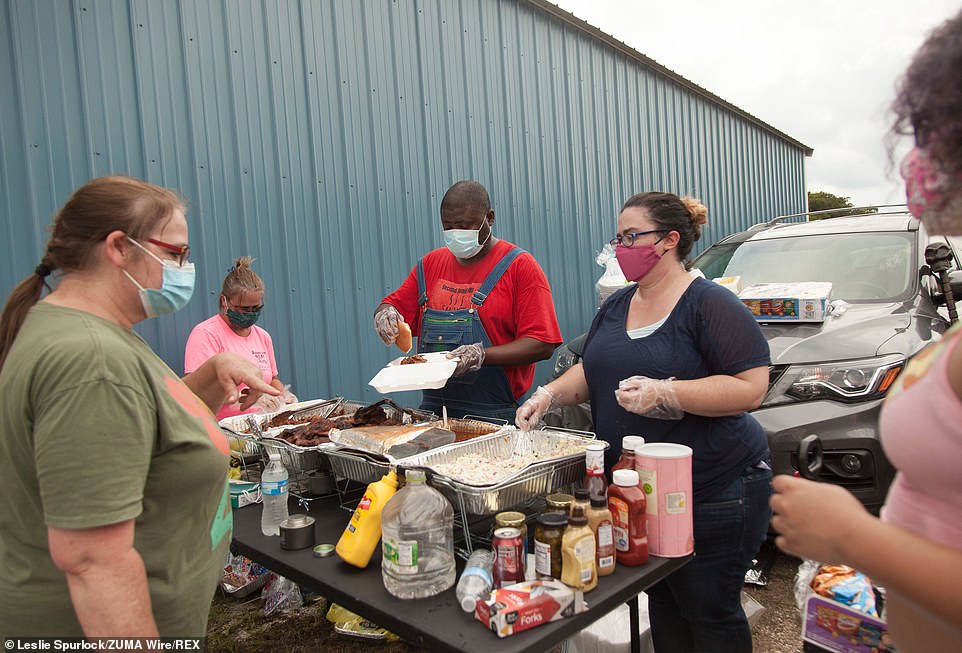 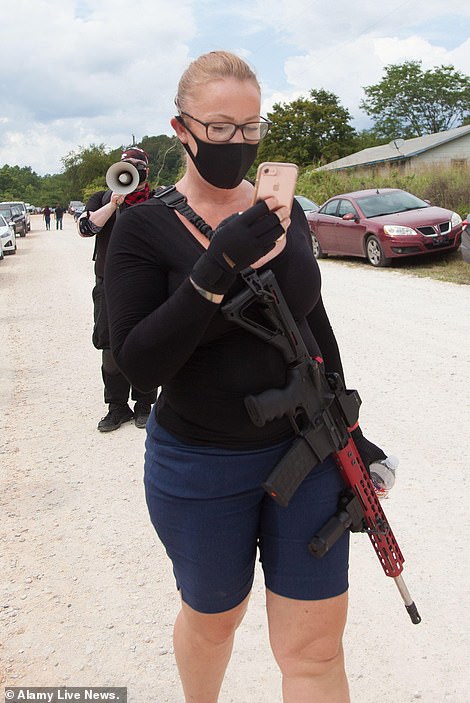 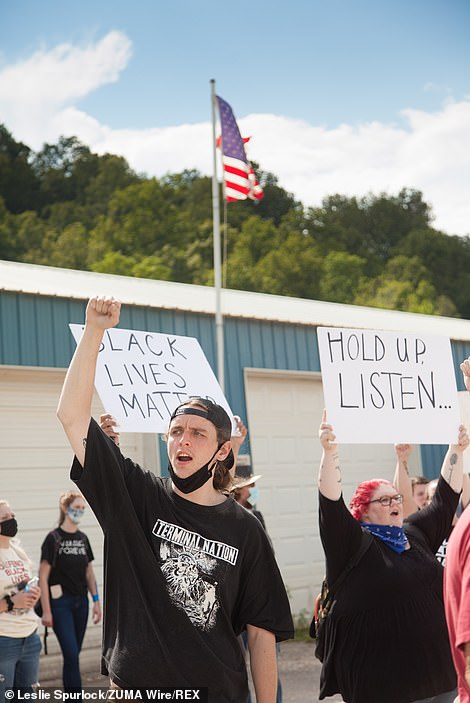 An armed protester (left) is seen in Zinc, while other protesters held signs and chanted in what appeared to have been a peaceful protest on Sunday 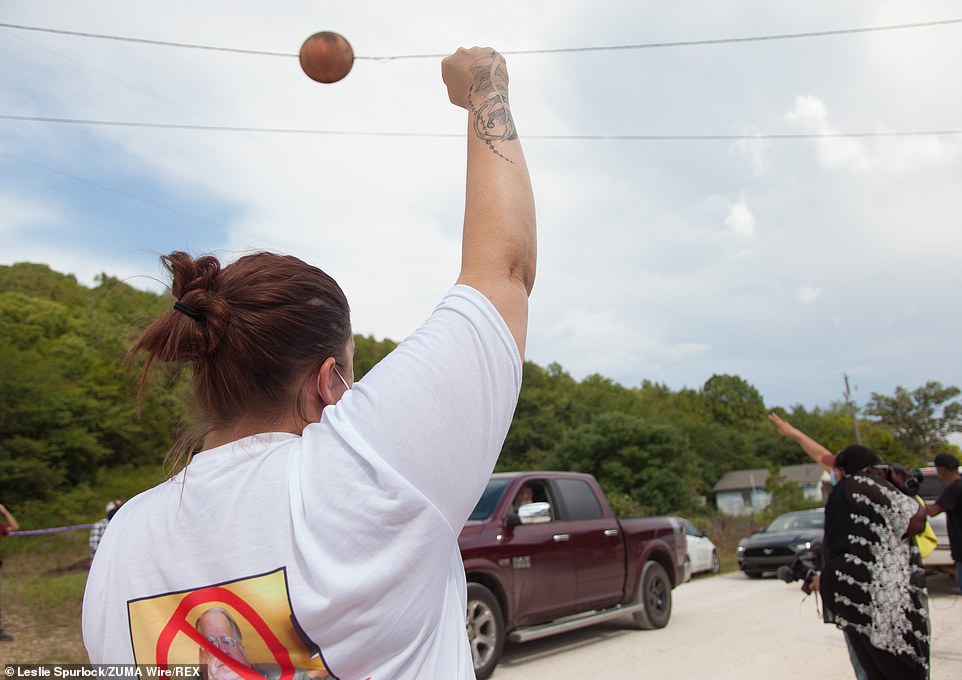 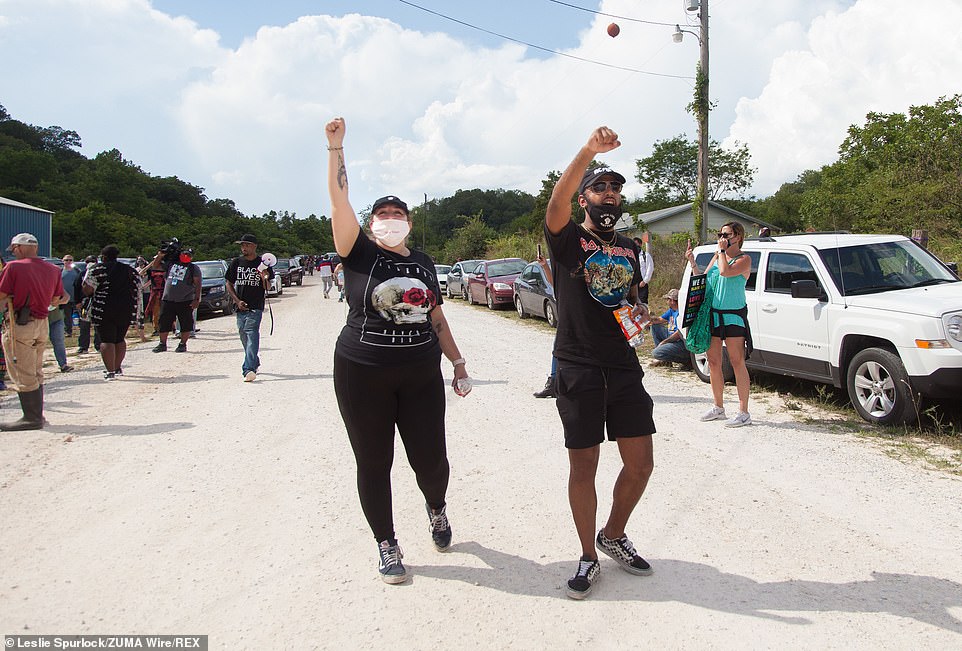 Protesters said that they had traveled to Zinc to shine a spotlight on the town and said that nobody had ever demonstrated there before. All protesters were said to have been able to leave the city safely 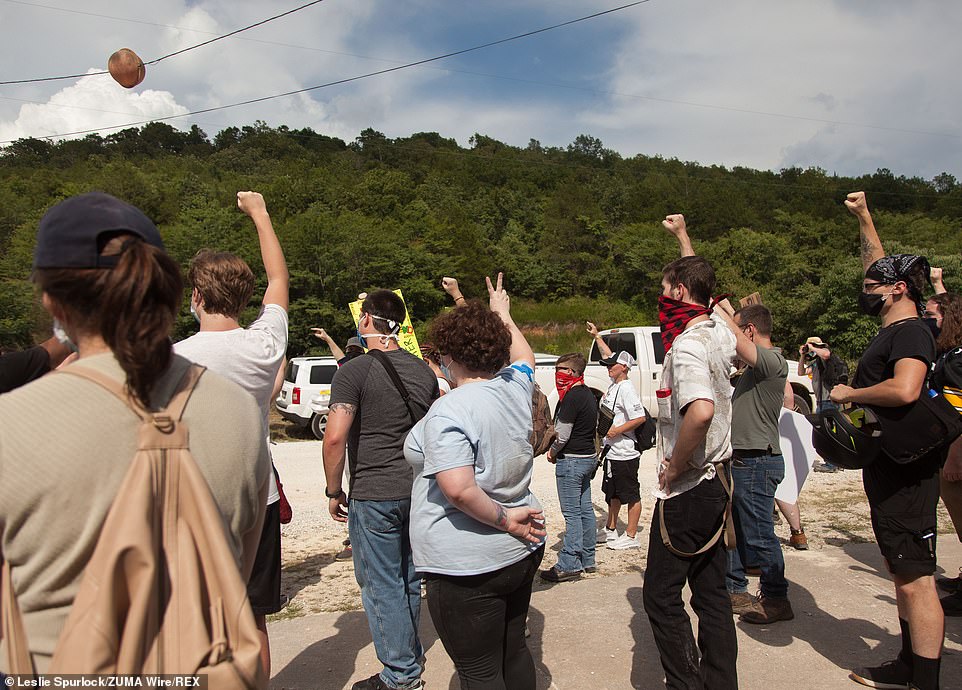 Several dozen protesters were said to have gathered to make the trip to Zinc, Arkansas, from neighboring cities and towns

Eugenics has long been debunked. I comprehend that people have the right to be as wrong as they desire. People have to sue more for others violating their rights, that's the only thing that the violators comprehend, money. Behavior modification can be achieved when they have monetary judgements against them. Inviting all to, think logically, accept the truth, and, live accordingly. Peace, always.