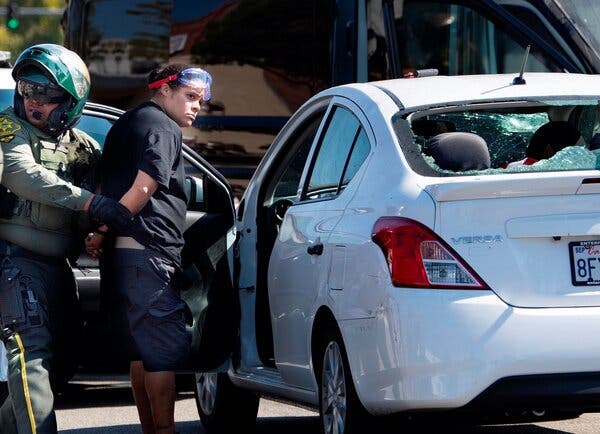 A California woman has been arrested and charged with attempted murder after a viral video showed her attempting to flee an angry crowd of suspected white supremacists during a “Caravan for Justice” event in Yorba Linda, Calif. on Saturday Sept. 26.

Tatiana Turner, 40, reportedly struck and injured demonstrators during a dueling protest with Black Lives Matter activists and pro-Trump supporters. As the violent white mob began to surround her car, she sped away and was later arrested without incident. According to Orange County Sheriff’s Department spokeswoman Carrie Braun, the man and woman who were hit were transported to a hospital with non-life-threatening injuries, per MSN.com.

Turner has been charged with attempted murder and is being held on $1 million bail.

According to the official statement released by the police, “At approximately 3 pm, after several dispersal orders, a vehicle in the parking lot of the Yorba Linda Public Library at 18181 Imperial Highway struck at least two individuals. The driver, believed to be part of the Caravan for Justice, continued to leave the parking lot and was detained a short distance away from the incident. The two people struck, a man and a woman believed to be at the protest, were transported to a nearby hospital with major injuries but are expected to survive.”

Turner’s white sedan was pursued by dozens of protesters who smashed several of the car’s windows before she was laster detained by law enforcement a few blocks away. She is also facing a charge for assault with a deadly weapon. Police said she was on the scene as part of the “Caravan for Justice” event.

“People had broken her windshield,” Anthony Bryson, who helped plan the event for the Urban Organizers Coalition, told The Associated Press. “She was trying to leave. She was in fear for her life.”

Video shows a crowd of people surrounding Turner’s car before she accelerates forward. The rear window is smashed out as she drives away (check out the clips above).