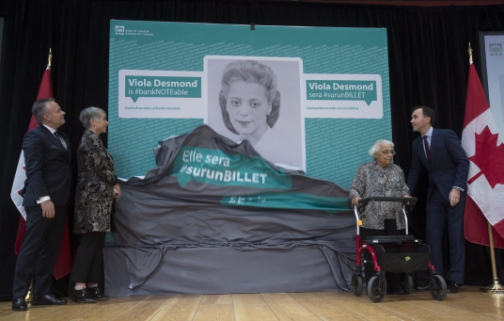 Bank of Canada Governor Stephen Poloz, left, Minister of Status of Women Patricia Hajdu, Minister of Finance Bill Morneau, right, and Wanda Robson unveil an image of Viola Desmond who will be featured on the new Canadian ten dollar bill during a ceremony in Gatineau, Quebec, Canada on Thursday. (Photo: AP)

A black woman often described as Canada's Rosa Parks for her 1946 decision to sit in a whites-only section of a Nova Scotia movie theater will be the first Canadian woman to be celebrated on the face of a Canadian banknote.

Finance Minister Bill Morneau said Thursday that Viola Desmond will grace the front of the $10 bill when the next series goes into circulation in 2018.

A businesswoman turned civil libertarian, Desmond built a business as a beautician and mentored young black women in Nova Scotia.

It was in 1946 when she rejected racial discrimination by sitting in a whites-only section of a New Glasgow movie theatre. She was arrested and fined. Her actions inspired later generations of black people in Nova Scotia and the rest of Canada.

THANKS Mervin E Yearwood FOR THE VIDEO

Ivan Butcher II they have rules for those white people on the money too, i mean many people are working two to 3 jobs to make money, married women are out there selling ass or sleeping with other men for money, you have young boys turning gay sleeping with older men for money, people killing for money, now dont you think no matter what it is important that we have a black face on the money, since every one of them are white, i mean come on if they dont every one complaint now they do e find a reason to complaint, when do black people happy

oh by the way she is beautiful she deserves to be on the money many complaints but guess what the money that you are killing for is all white, whats wrong with carrying a black person in my pocket, i tell every one i carry all my enemies in my pocket they are all dead, so those who are alive dont mean nothing to me if i cant use them, so yes i welcome of any black person on the money anywere

we do have a few strong black women around the world compare to the majority of donkeys run around the community popping kids wearing weaves instead of become strong women, let her be recognize all over the world aint nothing better than a strong black woman, so hard to find these days, all we have is history which some seems to ignore

I see the rhetoric...I'm proud of my rebellious peoples...but I see through the B.S.

Don't get me wrong, I'm very proud of my rebellious peoples...but I see through the B.S.

but I see right through the B.S. First America, now Canada, who's next FRANCE...HA

Yeah...on behalf of her strength and tenacity!